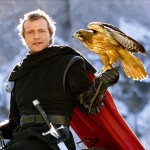 That Vietnam origin story, by the way, is all taken care of during the opening credits, which is admirable. No time wasted. 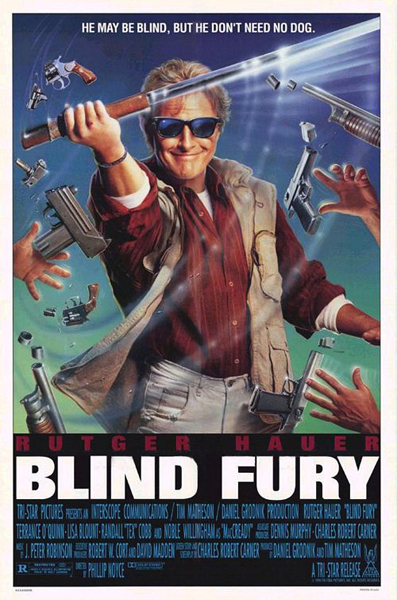 White Zatoichi goes to reveal his “alive” status to a war buddy played by “Terrance O’Quinn,” who people now call “so-and-so from LOST” but he is actually THE STEPFATHER. Before the swordsman gets there, O’Quinn gets kidnapped by the mafia and forced to use his chemistry skills to formulate a sea blue “designer drug.” The wife (creepy-eyed Meg Foster from THEY LIVE) gets shot right in front of White Zatoichi’s ears so he takes their son on the road to try to reunite him with his father.

This is a weird and enjoyable movie, but you know you’re in some trouble as soon as you realize this kid is gonna be in the whole movie. You can’t blame the poor kid, but he is not exactly a great screen presence. The movie was made in 1989 and he’s the usual type of spunky blond brat who starred in children’s TV at that time. Then every once in a while he gets emotional and starts crying. This is an enjoyable movie but probaly more for kids than for adults.

The movie leans a little too far into comedy for my tastes. The bad guys include cartoon redneck brothers who actually refer to each other as “Brother Lyle” and “Brother Tector” so you know they’re brothers. They have jokey dialogue like when they get into trouble and yell “Shit! Fuck! Shitfuck!” They are balanced out a little by the more legitimately threatening Randall “Tex” Cobb (the evil biker from RAISING ARIZONA). But then you got White Zatoichi himself (actually, his name is Nick Parker) always doing wacky shit like driving a car and when a guy yells “Are you blind!?” he says “Yes, what’s your excuse?” The original Zatoichi was always fucking with people too, but he was more dry about it. Nick Parker can’t really hide the amusement on his face. I guess I prefer the ol’ stoicism.

Also, he’s not a masseusse. Zatoichi was a masseuse.

But whenever Nick gets to use his sword-cane the movie picks up. I don’t know if Rutger Hauer is a trained swordsman or what, but he looks good in these fights, and very efficient. Since this is the modern world he gets to use the cane-sword in ways Zatoichi never did, like slicing off door knobs and wrecking machinery. Like Zatoichi or WALKING TALL he catches people cheating at gambling. Zatoichi was much more clever, he deliberately allowed the gamblers to think they were taking advantage of his blindness in order to con them out of their own money. Nick just figures out how they’re cheating him and reveals it using his sword. But it’s still pretty fuckin cool.

When the top bad guy finds out about this blind swordsman problem he tells his underling to “get Bruce Lee” to stop him. “Bruce Lee’s dead.” “Then get me his brother!” They settle for Sho Kosugi, the same mistake the bad guys made in ENTER THE NINJA. Maybe they figured Franco Nero was a ninja, this guy is more like a samurai, it’s a completely different type of white-man-trained-in-Ancient-Japanese art. Kosugi gets to wear modern clothes though (no ninja outfit) and they fight on the edge of a hot tub.

Maybe the weirdest thing about the movie is the fact that George Lucas seems to have borrowed one of the most memorable PHANTOM MENACE shots from it. The climactic villain death is an overhead special effects shot of the guy plummeting off a mountain, and after he flips over a couple times the body separates into upper and lower halves, revealing that Nick has actually cut him in half. A reader named Rob B. tipped me off to this, but I figured he was exaggerating the similarity. After seeing it I think it couldn’t be a coincidence. Either George Lucas likes BLIND FURY, or some storyboard artist saw it as a kid and had it ingrained in his subconscious. Or maybe both movies are referencing some samurai movie that Rob and I are not aware of. Anyway there you go, it was cool in PHANTOM MENACE but BLIND FURY was there first. If you liked PHANTOM MENACE you will love BLIND FURY. Randall “Tex” Cobb is Darth Maul, the kid is either Anakin or Jar Jar, and somewhere there are probaly hardcore Zatoichi fans who still can’t get over this one. May the force be with you, etc.

Randall "Tex" Cobb Rutger Hauer samurai Sho Kosugi
This entry was posted on Thursday, July 12th, 2007 at 11:07 pm and is filed under Action, Reviews. You can follow any responses to this entry through the RSS 2.0 feed. You can skip to the end and leave a response. Pinging is currently not allowed.