Let me put it this way: It’s a movie made by people who thought five syllables was too unwieldy for a title, but two was too small, and therefore it should be referred to by the half-sensical abbreviation “ID4.” That’s not normal people thinking. That’s pure Emmerich. And I think it’s fair to say that only Emmerich (with his then writing/producing partner Dean Devlin, an actor from MOON 44) could’ve, or at least would’ve, made this movie.

I suppose what works best in ID4: INDEPENDENCE DAY 4TH OF JULY is the traditional unfolding of the disaster. SETI receiving a signal, the Pentagon spotting the Mothership, satellites not working, international news coverage of other ships, attacks, trying to fight back, shields, a dead alien, the reveal that the government has a crashed ship and some bodies in Area 51 that were an early warning sign… Unfortunately, Emmerich’s style is to illustrate these situations with annoying characters and inane humor. We can’t have heroic MIT-grad figure-outer Jeff Goldblum without his mugging father Judd Hirsch or his wacky gay co-worker Harvey Fierstein, who says “I gotta call my brother. My housekeeper. My lawyer. Nah, forget my lawyer!”

You get it? Because lawyers, man. The worst! Oh what I wouldn’t give to see one of those greedy motherfuckers eaten off a toilet by a dinosaur, am I right? 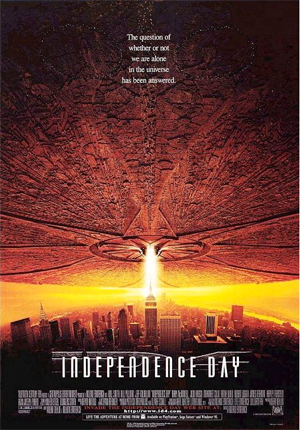 It’s a big Irwin-Allen style ensemble, with Goldblum sort of as the lead, basically seeming like his character from JURASSIC PARK even though he trades in his cool guy leather jacket and sunglasses for a bicycle and obsession with recycling. What a nerd! Bill Pullman as President Whitmore I guess has the best character since he’s the most ridiculous, a one-upping of Harrison Ford’s asskicking president in AIR FORCE ONE. I think Will Smith was taken to a new level as a movie star playing top gun so-and-so, but it’s not much of a character beneath the formulaic swagger. I’m not surprised he had no interest in going back to discover what makes (checks IMDb) Captain Steven Hiller tick. And Randy Quaid, whose over-the-top bottle-sucking “I was raped by aliens!” shtick was not funny then, is just kinda sad to watch now that he has actually turned into that guy times ten.

To me this is weak as a monster movie. They do plenty with flying saucer battles, but the aliens themselves – an ugly off-brand mishmash of the queen from ALIENS and the cliche big eyes of Whitley Strieber – have little personality. I could probly rattle off a dozen funny things the Martians did in MARS ATTACKS! but I just rewatched this one and I can’t remember how many aliens they even show or what they are doing. It doesn’t help that two seconds after we first see one Will Smith gives it a one-punch knockout. It’s funny to see him dragging the unconscious body through the desert, but it kills the whole build up of tension at the wrong time.

The idea here is obviously a ’90s update of a ’50s flying saucer film, yet it doesn’t seem to aim for a ’90s level of the ol’ verisimilitude. We must accept that the military is so protective of their UFO secrets that they kept them from the president, yet after he finds out they’ll let him bring in his press secretary’s ex-husband, the ex-husband’s dad, and hey why not also a fighter pilot and his girlfriend and her son and her dog. It’s cool, U.S. military. Relax. And they’ll leave Goldblum and his dad alone all night with the flying saucer and nobody will be there to intervene when he gets drunk and starts smashing shit.

You could make a movie where smart people put their heads together APOLLO 13 team of scientists style to understand alien technology and learn how to control it. Or you could have Will Smith know how to do it because he’s seen them close up. Obviously this is the second one. This is a world where only the general played by Robert Loggia will say anything when the president (Bill Pullman) decides on the horrible, horrible plan that he is going to personally fly the plane with the bomb for the mothership. And then the general is not gonna stop him and gonna make it obvious that he’s kinda impressed by this absolutely moronic and world-risking recklessness.

Since I hadn’t watched this whole thing in 20 years I don’t think it ever occurred to me that some of George W. Bush’s famous moments – the megaphone speech at Ground Zero, and the jet landing/flight suit thing on the Mission Accomplished aircraft carrier – had to have been inspired by this movie’s depiction of what his father should’ve done when he was a president accused of wimpery. The press corps and others keep complaining that President Whitmore has become “a wimp,” that he’s “too much politics, too much compromise.” In other words doing his job of bringing a divided congress together to pass legislation to try to improve the country. But don’t worry, we know he’s getting a bad rap and he actually has gigantic balls and he’s going to show off his gigantic balls and we’re all gonna high five each other and it’s gonna inspire each and every one of us to grow the size of our own balls to a larger size like his balls.

Yeah, I’m just going to say it. There is a real possibility that this dumb ass movie influenced George W. Bush’s macho foreign policy, and got people killed. I’m not saying for sure, but I’m saying possibly, and I’m not joking. That’s a hell of a thing to think about.

After Whitmore’s speech and his stupid, stupid, stupidly risky battle strategy everyone is in awe of his masculinity. A pilot salutes so emphatically he could’ve chopped a cinder block in half. A teen (Lisa Jakub from MATINEE) looks forgivingly at the father whose alcoholism and crazy behavior caused her a life of misery and humiliation that will extend into not appearing in the sequel. The American plan to, like, try to blow them up causes worldwide admiration. “It’s about bloody time!” says a Brit who of course couldn’t come up with a plan himself. Israelis and Palestinians look at America’s coded message together as brothers. In France they view it huddled together looking like a movie about the French Resistance. As a genuine European and world traveler, I have to wonder if Emmerich only does this shit to condescend to his American audience.

I always thought this was a bad movie and touchstone of the “it’s not supposed to be Shakespeare” crowd, and I don’t think it’s aged well. Truly the main appeal, and center of the very successful advertising campaign, was the destruction of landmarks like The White House. Remember how they got everybody in the theater? It wasn’t by saying “the new film by the makers of STARGATE” or “the campy new fun time where you just check your brain at the door guys it’s fun!” It was with these trailers:

It’s interesting how deadly serious they are. Not at all the goofball shit everybody remembers now. Maybe that serious version is what I wanted at the time.

Since then we’ve seen it done in other movies with more modern special effects, and world events and shifting tastes have made building destruction less crowdpleasing and more upsetting. These special effects seemed pretty state of the art at the time, but they had saved money by not going completely digital. It’s one of the last movies with large scale use of miniature models, and not combined as heavily with digital effects as THE PHANTOM MENACE, which gives it a bit of a retro appeal now. They look a little hokey. Which I’m okay with.

But obviously all this corniness and stupidity is not an accident, and even if it is it gives me a laugh, so I can’t fault anybody for liking the movie for that. The part that brings me the most joy is after Vivica Fox makes it out of a tunnel of exploding cars, she turns to call to her dog, and we get this ridiculous shot of the dog running toward the camera in slow motion and jumping away from a fireball.

There’s a trope that a pet escapes death in a disaster movie (in VOLCANO it was a pot-bellied pig I believe), but it’s inspired absurdity to combine that with an action star glory shot. And it’s not just that, but the oblivious look on the dog’s face. It gets me every time.

I can’t hate this movie anymore. As long as I don’t have to feed it or clean up its shit I’m okay petting it every once in a while if it’s on cable.

aliens Bill Pullman Dean Devlin Jeff Goldblum Judd Hirsch Lisa Jakub Randy Quaid Roland Emmerich Vivica A. Fox Will Smith
This entry was posted on Thursday, July 7th, 2016 at 7:41 am and is filed under Reviews, Science Fiction and Space Shit. You can follow any responses to this entry through the RSS 2.0 feed. You can skip to the end and leave a response. Pinging is currently not allowed.