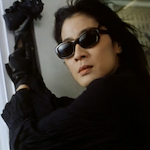 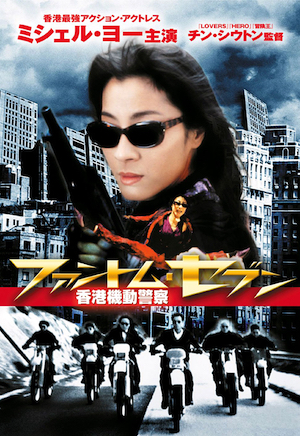 1. Team leader Jeffrey (Li Ning, THE LAST DUEL OF THE GREAT WALL) sees her scarf blow off in the wind and jumps into water to get it and pretends he can’t swim and she almost leaves him there but feels bad and dives in to save him which begins a long flirtation with him claiming she should teach him how to dive. It’s one of those things in a Hong Kong movie where you’re not sure if it’s mistranslated subtitles, a cultural thing we wouldn’t understand, or just weird.

2. She’s handing off an electronic device McMuffin they just call a “card” while the team are staking out a guy at a parade. Turns out she’s a criminal working closely with the increasingly unhinged coke kingpin Tsun (Chin Ho, PEACE HOTEL).

The plot is silly and a little convoluted and mostly involves the team trying to bust the syndicate, Jing being more moral than the rest of her gang, and Jeffrey trying to save Jing with the power of his love or whatever. So I was mainly just waiting for the action, which thankfully is pretty frequent. There’s a pretty cool part where team member Dragon (Vincent Lau, TOKYO RAIDERS) is hospitalized and they protect him by lowering through the center of a long stairway tied to a fire hose. Jing shows up and when she throws aside the flowers she’s hiding her gun in Jeffrey runs up the wall, jumps, tosses a throwing dagger, and it hits her bullet in the air, causing it to divert.

I love that shit! It reminds that in Ching’s Seagal movie BELLY OF THE BEAST, Seagal’s character shoots an arrow apart with his gun, then slices one in half with a sword. This particular one could be seen as an analog-beats-digital/Ewoks-beat-Stormtroopers type theme, since the plain old pounded steel defeats the later, more powerful technology, but the Seagal one goes both ways. So I’d guess it’s not so much a thematic obsession for Ching as just one of the thoussands of action beats he has correctly determined are fucking cool.

I have to admit my favorite part of the movie is the sad part. The team member nicknamed “Superman” (Andy Chi-On Hui, SWALLOWTAIL BUTTERFLY) dies in a, uh… I guess you would call it a motorcycle/junkyard collapse incident (hard to explain), so – as is apparently their tradition – they bring him to a cliff and tie his hands and feet to his motorcycle like you’d do if you were sending Bernie from WEEKEND AT BERNIE’S on a road trip. A sad ballad plays as they flash back to all the fun times they had with Superman earlier in the movie – throwing a durian at his head, him putting a bra on his head, all the great and hilarious laffs and jokes that friends do together. Then they squeeze his hand on the clutch to launch his motorcycle over the edge of the cliff, and somebody presses a detonator to the dynamite that causes him to explode in mid-air. Goodbye, sweet prince.

Eventually, obviously, Jing turns on her gang and joins the Wonder Boys. Her boss seems to know the big showdown is coming, so he spends a night alone playing piano at “The Jazz Club” – which appears to be the very same club featured in HARD BOILED. This does not necessarily mean they take place in the same Wooniverse, because I’ve looked it up before and that was the real name and logo of a Hong Kong jazz club. But wouldn’t it be cool if they had a picture of Tequila on that wall somewhere? Or an employee of the month plaque for Mr. Woo, the advice-giving bartender played by John Woo? 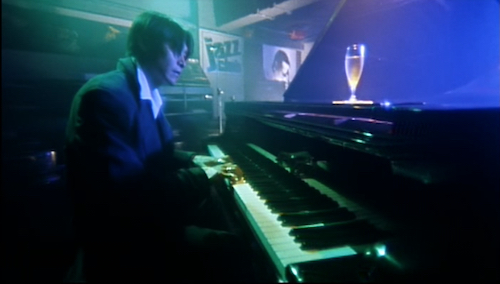 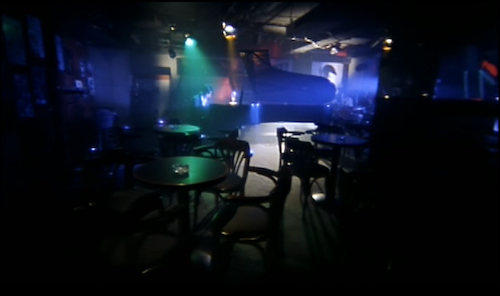 This one is arguably a little light on lunacy for a Ching movie, so I appreciate that at least we get this gratuitous musicianship out of the blue. In case it changes your opinion of him, you should know that Tsun is a multi-instrumentalist. When Jing and the Wonder Seven come to get him he’s in some big parking garage or something with a drum kit set up and he’s jamming out. Massive respect to Ching for having a couple shots showing him playing and multiple motorcycles driving at the same time. 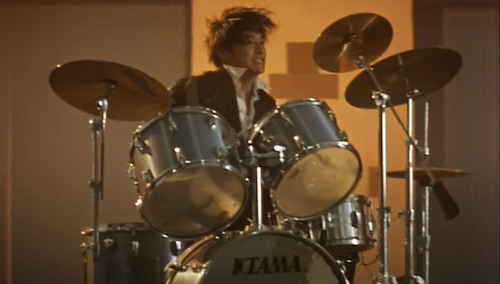 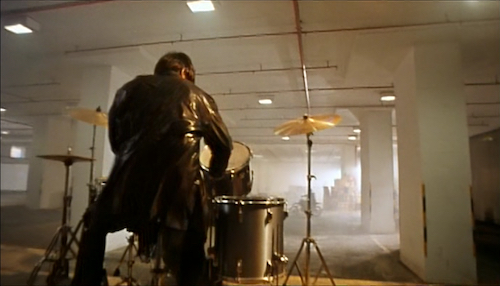 They play a good trick where they leave one motorcycle parked on an elevator to provoke the curiosity of the bad guys and then they poke in through the top to ambush them.

Right after that they have more guys who pop in through the drop ceiling. I didn’t find the third act battle all that exciting, but there are some good motorcycle stunts and some of the ol’ hanging off a window washer platform outside a skyscraper type stunts, which I gotta respect. There’s some stuff involving a helicopter and it looked like they used a large model for a crash on the outside of the building and a full sized replica for it to drop into the street. I could be wrong. 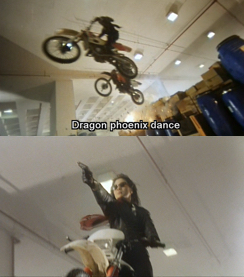 I like that during the battle they yell off weird names for their maneuvers. I guess “Dragon phoenix dance” means “fire your handgun a whole bunch of times while your motorcycle flies.”

By the way, there’s also a character named “Coach” (Elvis Tsui, THE BOXER’S OMEN, THE SEVENTH CURSE, THE GRANDMASTER) who seems to switch from bad guy to good guy? I didn’t really follow what the deal was with Coach, but I like that his name was Coach. It’s too bad they couldn’t get Craig T. Nelson to do it, but it is clearly the same character, and I’ve heard that the last few seasons of the sitcom seem like complete gibberish if you’re not familiar with what the character was up to in this movie.

WONDER SEVEN is definitely a lesser, disposable entry in the filmographies of both Yeoh and Ching, but there is one superficial aspect of it that makes it stand out, and that I must pay tribute to in the form of extensive screen grabs: Michelle Yeoh in this movie dresses like a girl I would’ve had a crush on in the early ’90s, who would cause me to strain to understand mopey European bands that I just don’t have the capacity to appreciate. 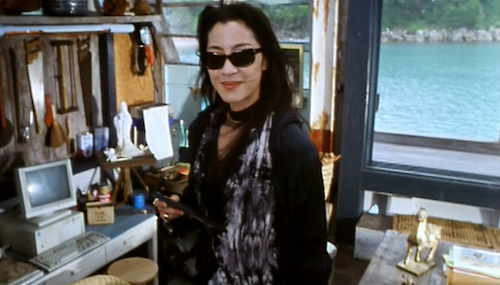 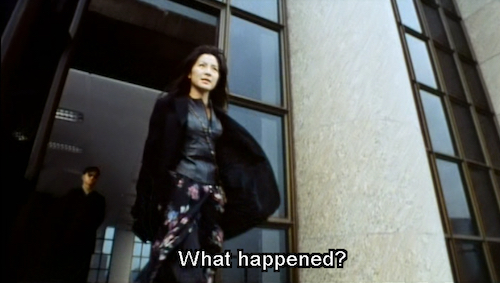 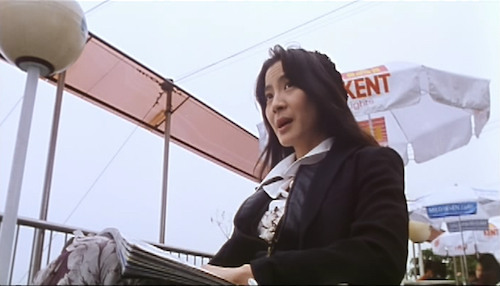 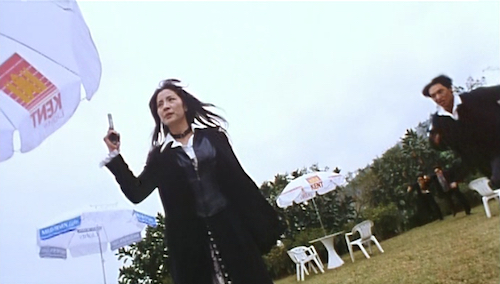 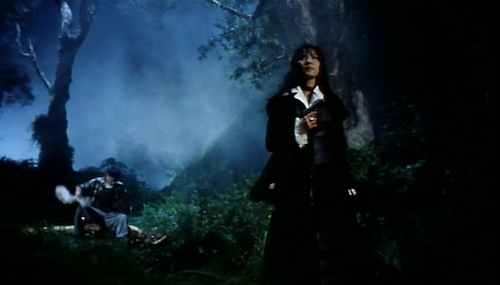 Can’t you picture Winona Ryder wearing some of these outfits? Or maybe Samantha Mathis in PUMP UP THE VOLUME? Or at the very least Michelle could’ve been in THE CRAFT? She’s got the black coats and dresses and boots and chokers but she can do flying kicks and motorcycle jumps in that shit. The ultimate ’90s dream girl.

Chin Ho Ching Siu-Tung Hong Kong action Michelle Yeoh
This entry was posted on Wednesday, April 1st, 2020 at 10:23 am and is filed under Action, Martial Arts, Reviews. You can follow any responses to this entry through the RSS 2.0 feed. You can skip to the end and leave a response. Pinging is currently not allowed.