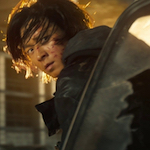 This one starts maybe a little bit after the other two movies. Jung-Seok (Gang Dong-won, ILLANG: THE WOLF BRIGADE) uses his station as a captain in the Marines to get his sister and her family a spot on an evacuation ship. But of course a guy on the boat starts twitching weird and next thing you know there’s running and screaming and biting. This is just a pre-credits sequence but, like TRAIN TO BUSAN, it captures a deep sense of loss as Jung-Seok and his brother-in-law Chul-min (Kim Do-yoon, THE WAILING) see their loved ones turn into monsters.

It jumps to four years later. From a global perspective, the outbreak has been contained, but the united Korea has been left as a quarantine zone, with militias and some unlucky strugglers stuck there with the zombies and kind of an ESCAPE FROM NEW YORK type lifestyle. 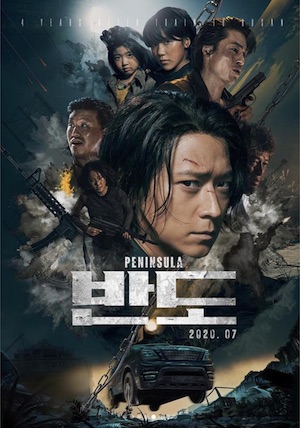 Living broken lives in Hong Kong, Jung-Seok and Chul-min accept a job from mobsters to go into the zone with a team and find a truck that’s been abandoned with bags full of American money. They’re told that if they get it they get to keep half. They’re dropped off by a boat, with satellite phones to call for another one to pick them up when they’re done. Of course they’re very concerned about zombies, but they’re told those things are “nearly blind at night,” and sure enough they’re pretty easy to deal with. Mostly by running over them with the truck.

The locals are another matter. The team gets ambushed and hijacked by some soldiers from a group called Unit 631, who don’t even know about the money – they just think the truck has food in it. Jung-Seok gets thrown from the truck and seems doomed to be a zombie snack, until a fortified mini-van zooms in and skids out in front of him. The driver, Jooni (Lee Re) pretty much quotes the TERMINATOR series’ “Come with me if you want to live” catch-phrase, but forgets that she still has the child lock on.

I can’t tell if Jooni is a teenager or a twentysomething, but she’s a young woman driving around with her pre-teen sister Yu-jin (Lee Ye-won) and she is very, very good at hauling ass through this zombie hellscape. She’s very calm and casual about it, clearly experienced and intimately familiar with every street, every sharp turn, every alley narrow enough that she has to fold in the side mirrors so they don’t get knocked off. She deftly pulls the handbrake and drifts, sometimes to make the turns, sometimes just to sideswipe a herd of zombies. And when they get trapped in a tunnel it’s little Yu Jin’s turn to drive… she has a radio controlled car covered in flashing lights that attracts the attention of the zombies so she can pied-piper them out of there.

(Later there will be a sort of rodeo clown for zombies who runs into a mob wearing a suit made of flashing lights. Last time I watched LAND OF THE DEAD I didn’t like it as much as I used to, but I’m glad Romero’s “sky flower” concept of dazzling zombies with fireworks has made its way into other people’s zombie stories.)

So Jung Seok ends up sheltering with these girls, their grandpa Elder Kim (Kwon Hae-hyo, previously a voice in Yeon’s animated film THE FAKE) and their mom Min-jung (Lee Jung-hyun), who, to his great shame, he recognizes as a woman whose pleas for help he refused when he passed her on the road while evacuating. And here she is. Still here.

He believes the rest of his heist crew was killed, but in fact his brother-in-law Chul-min survived in the back of the truck, only to be captured by cruel 631 Sergeant Hwang (Kim Min-Jae, THE GOOD THE BAD THE WEIRD), who spraypaints a number on his bare chest and locks him in a cargo container full of cowering prisoners. It turns out the container opens to an escalator into the bottom floor of a small shopping center that has been flooded and converted into a battle arena where the prisoners have to survive waves of zombies while the 631 troops watch and bet from behind chain link fences. Not an ethical or honorable sport, in my opinion. I’m boycotting the pay-per-views.

But there’s some intrigue within the 631. Lowly Private Kim (Kim Kyu-Baek, “Drunk Person 1,” PARASITE) finds the money and the satellite phone and brings them to Captain Seo (Koo Kyo-hwan, CASTAWAY ON THE MOON), who seems to have a tense relationship with Sergeant Hwang. They hatch a secret plan to trade the money for evacuation from the peninsula, distracting the others by giving them more food than usual and offering a 24-hour zombie “game” for entertainment.

But Jung Seok and his new friends also come looking for the phone and the money, so everybody comes into conflict.

As with the other films in the series, it’s a really cool plot and also the plot isn’t really the point. It’s more about the little quirks of the characters and their world and the morality of how they treat each other in this disastrous situation. Though I definitely didn’t feel as emotionally connected to this one as the other two, I still really got to like this family and get invested in Jung Seok’s need to redeem himself for failure to help them before, or to protect his sister. (To be fair, if he’d gotten Min Jung or her daughter onto the boat they very well may have been killed right then.)

I like the story of the rival Unit 631 leaders. We don’t really know the full context of their conflict, and neither of them seem like someone to root for, but it’s interesting drama. There’s a great scene where Captain Seo and Private Kim are getting ready to make a run for it, and Sergeant Hwang is suspicious about how nice the captain is being to him so he comes into his office to sort of feel him out. Not knowing he’s there, Private Kim walks in and almost gives up the whole gig. But suddenly it hits the sergeant – he asks if they’re “a thing” and when they say yes he seems to feel bad having violated their privacy, apologizes and leaves. Honestly I didn’t understand if this meant they actually were lovers, or if they just played along with his assumption because it made a good cover story for their conspiring, but either way it’s refreshing to see that a maniac who keeps people captive and forces them to fight zombies for entertainment doesn’t necessarily have to be a bigot too.

PENINSULA feels the least like a “zombie movie” of the series. As tends to happen in these stories, the living have adapted to the new way of surviving, which is particularly easy here because they have pretty good fortresses that they stay inside during the day. So they almost forget about the zombies, since there are living people around who are bigger threats to them in this lawless world.

That said, there’s one really cool zombie concept that seems pretty new: a sort of pyramid of ghouls that seem to have grown together like a rat king? We don’t see that much of them, though. Hopefully they get a spin-off, a cartoon, dolls, etc.

There are definitely things that remind us of Romero and other zombie movies – we’ve got the rampaging soldiers, sort of a mall, zombie combat like in LAND OF THE DEAD. The weirdest one I noticed is (vague ending spoilers) a pretty straightforward redo of that goofy part at the very end of DAWN OF THE DEAD when Peter is about to kill himself but changes his mind and runs to the helicopter as triumphant music plays. I’m not saying that PENINSULA is anywhere as good as DAWN, one of my favorite movies ever, but this particular part is more effective than DAWN’s version, in my opinion.

TRAIN TO BUSAN is still the only zombie movie that has made me cry. This one didn’t get there, but it still works on me because it’s so clear that it means it. Immediately following the death of a character there’s a big exciting shootout/escape sequence, but it’s scored with sad orchestral music. Yeon wants to make sure you’re still mourning the loss of human life at this point, not getting all excited to kick ass.

But there is definitely some excitement and some ass-kicking in the climax, an epic vehicle chase and battle that would be cool even if the roads weren’t filled with hissing, hungry monsters. One way TRAIN TO BUSAN stood out from the rest of the subgenre was its emphasis on surviving rather than decimating. They built makeshift armor and tried to push their way through them, rather than the usual attempts to try to shoot as many of them in the head as possible. This one has more zombie killing, sometimes with guns, but primarily through the medium of vehicles. I don’t know how much is practical, but alot of it looks very animated in a good way. There are just so many of those things getting knocked around or plowed over and they go flying through the air and their limbs flail in the most interesting ways. It makes so much sense that it’s directed by an animator.

The last film’s success seems to have afforded this one a huge budget. There appear to be many gigantic sets built. The climax is very FX based – I honestly can’t tell if much of it is enhanced stunts (like FURY ROAD, an obvious inspiration for some of it) or if it’s mostly straight up animation and green screen – but with a really distinct and cool visual style. For a while the Unit 631 guys are driving behind our heroes shining powerful spotlights on them to attract the hordes. It’s dark, but everything has a yellow glimmer on it. It looks like an oil painting of our heroes being chased by a sunset.

I’d heard this wasn’t very good, and I’m thankful for the warning since it does not meet my original very high expectations. But the bar for “even better than TRAIN TO BUSAN” and the one for “pretty fuckin cool zombie movie” are not the same. This has no problem clearing the second one. It’s a good story with distinct visuals and action and I found it pretty moving in its own way.

Shoulda had a train in it though. I appreciate that they go into other areas of transportation on land, sea and air, but they had this whole theme going where the stories are based around different train stations. I guess that’s why it’s a presentation and not a part 3.

fast zombies Gang Dong-won Kim Do-yoon Korean cinema Yeon Sang-ho zombies
This entry was posted on Tuesday, January 19th, 2021 at 12:32 pm and is filed under Horror, Reviews. You can follow any responses to this entry through the RSS 2.0 feed. You can skip to the end and leave a response. Pinging is currently not allowed.