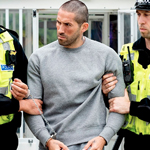 While it has a high level of fisticuffs for a gangster movie, this is not in the vein of the UNDISPUTED or NINJA series. The fights (fight coordinator: Dan Styles, stunt coordinator of ACCIDENT MAN; additional fight choreographer and action coordination: Luke LaFontaine, fight choreographer and stunt coordinator of THE DEBT COLLECTOR) are more blunt, brutal and messy than acrobatic. I’m not saying it’s documentary realism, but it’s not Boyka’s flying and spinning around. It’s a guy trying to batter his way through the waves of human bodies that never stop trying to shank him. 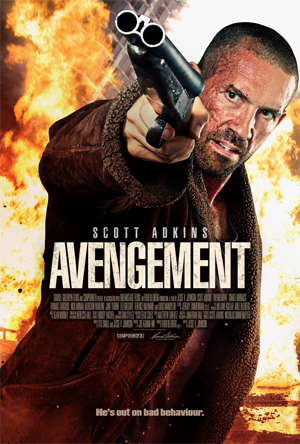 Like any good revenge movie, AVENGEMENT offers a compelling anti-hero who has been wronged and betrayed in such a way that we can enjoy rooting for his extreme and immoral reciprocation. This is made more interesting by putting him up against a uniformly great cast playing bad guys with some shade to them. They react to his threats and theatrics pretty reasonably, especially considering most of them have no idea who the fuck he is. Hyde taunts him, but also expresses sincere sympathy for the loss of his mother, and says how much he liked her. My favorite character is bartender Bez (Kierston Wareing, RISE OF THE FOOTSOLDIER, FISH TANK), who is correct to want this psycho to leave her bar, and whose mix of anger, disgust and curiosity about the unfolding events is often seen on her face standing in the background.

And Fairbrass as Lincoln Burgess is an excellent antagonist without ever even doing a flying kick. He shows sincere love for his brother and cold-hearted wickedness in equal measure. He repeatedly tries to talk Cain out of sullying himself with this illegal job, preferring that he keep his status as the straight shooter in the family. But then he lets him do it and insists on treating him just as badly as any underling. After all, he told him so. He truly doesn’t want to be fighting with Cain but also is too sociopathic to choose family over business. The performances and the screenplay by Johnson and ACCIDENT MAN co-writer Stu Small make it much more emotionally complicated and interesting than the standard version of this story. It doesn’t exactly make revenge seem sweet.

That seems to have been the goal. In a director’s statement, Johnson wrote, “I have a very strong opinion about revenge as a reason for a story. Revenge is ugly, and will make a person ugly. It is not the practice of good people. The person obsessed with revenge does so at the cost of his friends, family, life as he knew it. It will affect his diet, his health, his wealth. If done correctly it is a commitment to murder, the darkest of all human endeavors. It is not a heroic act and when it is used as a way to create a ‘hero’ in a film, I always find it incredibly false.”

Man, Jesse V. Johnson. I first found out about him when I watched the 2009 Eric Roberts movie THE BUTCHER. I remember thinking it was full of cliches and in need of tightening, but it really reminded me how great Roberts is, and I thought it was cool that it was directed by a stuntman going back to TOTAL RECALL. Then he did THE PACKAGE with Stone Cold and Dolph and I enjoyed that one. And I found this other earlier one called PIT FIGHTER which I don’t even think I knew was gonna have an early Scott Adkins appearance.

I even met Johnson at david j. moore’s The Good, The Tough and the Deadly book signing at Dark Delicacies in Burbank. He was filming SAVAGE DOG at the time and invited me to come check out the set the next day, but I envisioned myself getting stranded out in the desert and missing my flight. Man, I should’ve done it anyway! I mention this not for full disclosure or to brag (though it works for both) but because even though I felt cool that I got to meet him and I thought he was really nice and charming I definitely didn’t have a sense that he would shortly become the king of DTV action directors with an unprecedented streak of top shelf work. SAVAGE DOG, ACCIDENT MAN, THE DEBT COLLECTOR, TRIPLE THREAT and now AVENGEMENT all in just a couple of years. (There’s also another one in there called THE BEAUTIFUL ONES that I haven’t seen yet, but have heard is good.)

Though you wouldn’t expect it from his stunt background, Johnson seems more interested in the characters and performances than is traditional for the genre, and he has co-writing credits on most of these. Of course part of the strength of this stretch of movies is that they’re largely Scott Adkins vehicles, and the ones that came about after he asserted his desire to play more verbose characters, with dialogue crafted for him by his childhood friend Small. But it’s impressive that none of these feel repetitive of each other. In the weird period piece SAVAGE DOG he pushes a traditional action badass into surprisingly brutal territory (with excellent villain performances by Marko Zaror and Cung Le). ACCIDENT MAN is the most comedic and colorful of the group, an all star martial arts hitman romp based on a comic book. THE DEBT COLLECTOR finds us in more Elmore Leonard/Quentin Tarantino kind of territory, spending the day with low level L.A. criminals just working a shitty job. TRIPLE THREAT is Johnson’s big deal international co-production, with martial arts legends Iko Uwais, Tony Jaa and Tiger Chen taking on super villain Adkins. And now AVENGEMENT has Adkins physically transformed and starring in a grimier and more intimate British gangster tale with an effective underpinning of melancholy beneath its hard knuckle surface. The nail under its rust.

I really liked this one. Keep ’em coming, Scott and Jesse.

AVENGEMENT comes to VOD, digital and apparently even some theaters this Friday, May 24th.

p.s. Yeah, I thought it was a funny title too, but it turns out it’s a real word. And I appreciate that because I’m always having to switch between “revenge,” “vengeance” and “retribution,” and it’s good to have another synonym in the arsenal.

Craig Fairbrass Jane Thorne Jesse V. Johnson Kierston Wareing Louis Mandylor Nick Moran revenge Scott Adkins Stu Small
This entry was posted on Monday, May 20th, 2019 at 10:52 am and is filed under Action, Crime, Reviews. You can follow any responses to this entry through the RSS 2.0 feed. You can skip to the end and leave a response. Pinging is currently not allowed.