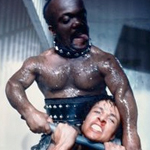 But PENITENTIARY III (1987) is a Cannon Film. It is not fucking around. It would be an exaggeration to say that Cannon did to the PENITENTIARY series what they did to THE TEXAS CHAIN SAW MASSACRE with part 2, but there’s definitely a hint of that sort of unhinged insanity. We find Too Sweet still a free man, competing as a legitimate boxer, when his corner man is paid off to put something in his water. (That he looks over his shoulder nervously and then just openly pours something into the water in front of an audience without anyone noticing is one of many goofy touches.)

I was expecting the drug to make him tired, but no – it causes him to fly into a rage and beat his opponent to death, at which point he’s charged with manslaughter and goes back to the pen. A new one, I think, but with a very similar boxing circuit to the old one.

I want to mention the music real quick. I have the soundtrack on vinyl. It has the Gap Band, Freda Payne, Midnight Star, a little crude rapping. Kind of middlebrow late ‘80s soul, not bad but not my favorite. Anyway the point is it’s very polished, but the score by Garry Schyman (NEVER TOO YOUNG TO DIE, HIT LIST) is a cheesy keyboard thing, and even uses Digital Native Dance. So it’s a relief when, as he’s being transported to the joint, we get some jazz saxophone like a Spike Lee movie. 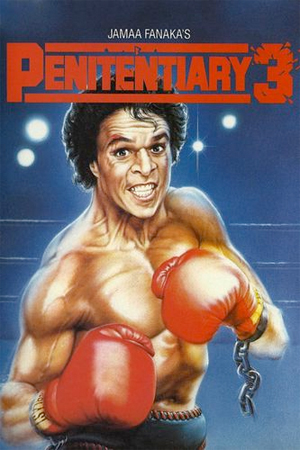 And then it’s even better when we see that one of the other prisoners being transported is the one playing! He’s Roscoe (Steve Antin, THE LAST AMERICAN VIRGIN, THE GOONIES, SURVIVAL QUEST, Rick Springfield’s “Jessie’s Girl” video, writer of PROUD MARY), who will be Too Sweet’s cell mate, rope-show-er and boxing protegee. He has Miles and Coltrane posters in his cell. Somehow he’s allowed to keep his sax, and I was thankful that no bad guys ever smashed it.

He explains that there are two boxing teams – one run by the warden (Ric Mancini, “Mayor Cobb,” FRIDAY THE 13TH: A NEW BEGINNING) and one by Serenghetti (Anthony Geary, DISORDERLIES, NIGHT OF THE WARRIOR, Luke from General Hospital), the gangster who rules the prison.

The unfolding of what goes on in this place is beautiful. A henchman named Hugo brings Too Sweet to see Serenghetti. Hugo is played by Magic Schwarz (OVER THE TOP, LIONHEART, STONE COLD), whose size and facial hair clearly identify him as a pro wrestler. Serenghetti’s cell is hidden behind a red velvet curtain and decorated like a rich person’s living room. He will spend most of the movie in silk pajamas, accompanied by Cleopatra (female impersonator Jim Bailey), watching the events unfold from a closed circuit TV. He has his own cameraman!

Too Sweet is instructed to keep his back turned and not speak. But when Serenghetti asks him to join his team he turns to him and tells him no. He says he likes to look a man in the eye when he tells him to kiss his ass. This does not go over well.

We’ve already seen what can happen to people who cross Serenghetti: the screws (who seem to work for him, not the warden) go down into the dungeon and get some growling monster called The Midnight Thud to let into their cell at night. This wild beast is kept out of view for a while, but the opening credits already revealed that he’s played by The Haiti Kid, who WWF fans know is what was at that time called a “midget wrestler.”

We finally see him when he attacks Too Sweet. He’s wearing a spiked collar and snarling like a wild dog. It’s a long, brutal fight that seems to deliberately echo the similar fight in his cell that is the highlight of the first film. Midnight Thud can punch, scurry around like an animal, jump nearly to the ceiling, crush Too Sweet’s face between his thighs. He has sharp teeth and he bites. At one point he sees an orange on the floor and tries to eat it, but Too Sweet knocks it away and continues the fight. When he eventually wins by bashing Thud’s skull against the bars he sits down on the bed and picks up the orange, a nice little reward like the candy bar from the part I fight.

A weird thing, though: he takes a bite with the peel still on. Then he holds it over his head and squeezes juice onto himself. Maybe it’s a boxer thing.

Well, now how are they gonna get Too Sweet in line? Serenghetti commands the guards to “Use the shocker on him. I want humble. I want broken.” Even they seem to think that’s fucked up, but they do it. They bring him downstairs, where it’s infested by rats and lit by candles. Midnight Thud (who does survive the fight) is in a bordering cell smoking crack. He has a little slot he can growl through, or piss through when the warden comes by. He watches them fry Too Sweet’s brain and winces at the memory of when they did that to him. Oh shit – that’s how you make a Midnight Thud!

Too Sweet doesn’t quite turn into a monster, but he’s a drooling, gibbering mess eating gooey chunks of white bread out of a dish when Roscoe comes to him and tries to get him to snap out of it to become his trainer. The warden sets it up, but they have to stay in the dungeon so Serenghetti won’t find out. He gets him ready for his big fight against See Veer (Danny Trejo in one of his first couple of movies) and is rewarded with some private sex time with women’s prison boxing champion Sugar (Ty Randolph, aka Mindi Miller, HELL UP IN HARLEM, BODY DOUBLE, CAGED FURY). But it’s a trick! They lock him in there and give See Veer that Bane drug and Roscoe gets beat nearly to death.

So Too Sweet finally agrees to fight in a free style brawl with Hugo.

Here’s where PENITENTIARY III goes from crazy awesome to oddly beautiful. While training Roscoe, Too Sweet decided to pass an orange to Midnight Thud. He got his hand bit, but he made an impression. As Thud watches him train for the fight – my favorite training method is jump roping with a chain, which causes some sparks when it hits the floor! – he becomes interested, and begins to revert to the person he was before they tortured him. Turns out he can talk, has a Haitian accent, is named Jessup. And he convinces Too Sweet to let him train him.

Best method: after teaching some breathing techniques, he repeatedly slams a heavy metal door on his gut.

I appreciate that Fanaka flashes back not only to the training but to the earlier fight, when Too Sweet somehow adopts the Midnight Thud technique of flight and crotch-to-face contact. Hugo doesn’t go easy, though. In one highlight he punches Too Sweet so hard he flies through the crowd and slams his back against the wall, leaving a crucifix-shaped blood smear.

I have exactly one complaint about the movie and that’s how casual they are about letting Too Sweet work for The Man. As hissable of a villain as Serenghetti is, it feels strange that there’s a nice white warden who completely supports Too Sweet, never betrays him and doesn’t even feel comfortable exploiting him. At the end he gives his gambling winnings to Too Sweet to hire a lawyer, explains the evidence that should help him get out, and sincerely promises to stop gambling and run the prison properly. I guess the correctional system isn’t that bad! They even let him stay in the dungeon. (I think it’s cool that he wants to.)

Still, I am convinced this is a classic. It would be a gift to the world if Vinegar Syndrome was allowed to do a remaster and release it along with their blu-rays of the first two, but obviously being from a different studio gives it a different rights situation. While I and II had been previously released on DVD by Xenon, part III has only ever come out on VHS.

Alain Jakubowicz Anthony Geary boxing Bundini Brown Cannon Films Dan Bradley Digital Native Dance Jamaa Fanaka Leon Isaac Kennedy Magic Schwarz prison Ric Mancini Rick Zumwalt Sandra Dee Steve Antin The Haiti Kid underground fighting
This entry was posted on Wednesday, September 25th, 2019 at 11:39 am and is filed under Action, Reviews, Sport. You can follow any responses to this entry through the RSS 2.0 feed. You can skip to the end and leave a response. Pinging is currently not allowed.