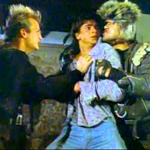 It starts on top of a dam, where Gene Simmons, dressed as a woman, gives a big THE WARRIORS style speech to a gang of DRAGNET: THE MOVIE style punks. He dreams of poisoning the water supply and I guess he doesn’t have time to take over state government and defund the infrastructure in poor and minority areas like how it’s done now. But he almost had some kind of computer disk that was gonna allow him to do the poisoning through the dam or something (I never quite followed this part). So he has abducted some lady who knows where the disk is and he tortures her with one long fingernail while the gang chants “THE FINGER! THE FINGER! THE FINGER!” 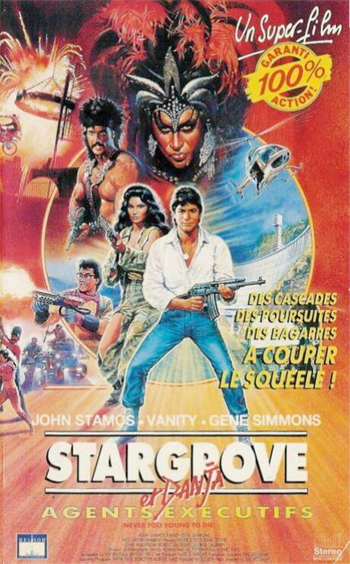 Or I guess maybe not, but he’s younger anyway. This Stargrove is a high school gymnast who is best friends with his nerdy-as-fuck roommate Cliff (Peter Kwong, BIG TROUBLE IN LITTLE CHINA, GLEAMING THE CUBE, ANGEL TOWN), and a little tired of living in the shadow of his legendary pops. But after his dad dies he inherits a farm, a hidden arsenal and the Case of the Missing Computer Disk That a Hermaphrodite Could Use To Poison the Water Supply.

Yes, Simmons’ character – who is named Ragnar, calls people “sweetie” in a voice like Marilyn Manson and performs at a rock club where people drive around indoors on motorcycles with carousel style horse heads attached to the front and the bartender gives them gas cans with their drinks – is not just supposed to be a cross-dresser. “Ragnar?” asks one of the late Stargrove Sr.’s colleagues named Carruthers. “The hermaphrodite? Half man, half woman? I thought he disappeared years ago.” 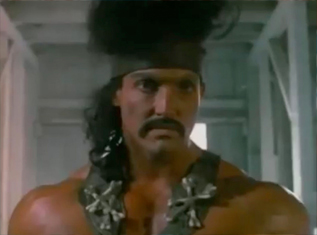 Well, he seems to have appeared, and he sends his henchmen to try get the disk from Stargrove colleague Danja Deering (Vanity, ACTION JACKSON). First up is Pyramid, a muscleman with giant hair, a headband and post-apocalyptic-barbarian style armor and vehicle. He’s played by Ed Brock, who was part of a bodybuilding squad called PowerTeam USA which also included the guys who would become Sting and The Ultimate Warrior. He ambushes Danja in the Stargrove horse barn, but she hits a button that flips the wall around 360 degrees and when she returns she’s firing a machine gun. This scene has the kind of weird dialogue that it’s hard not to love: He says “Fork over some RAM-K, bitch, or we’ll tenderize your butt,” and she says “Fuck you, warp face.”

Young Stargrove shows up during the fight and meets Danja (pronounced dan-juh or don-juh, although dane-juh would be cool), who he assumes was his dad’s girlfriend, but she claims “our relationship was professional.”

(In reality Vanity was four years older than Stamos, but 20 years younger than Lazenby. I mean, age ain’t nothin but a number, but that’s some serious respect for the old man if his son thinks he could pull that off with Vanity.)

Cliff is Stargrove’s Q, building him a blowtorch, chewing gum with a bug inside and, most spectacularly, a compartment on his motorcycle for storing the disk. I mean, that last one is hard to accept, but this is fiction after all.

I believe just about everyone in the movie who ever identifies as female takes a shining to Stargrove: Ragnar tries to Simmons-tongue him backstage – to be fair, he also caresses Robert Englund in a special appearance as a computer tech guy, but his attraction to Stargrove will end up being his Achilles heel. There’s also a trans waitress at the club who jealously tells Danja to “Treat him good, bitch, or I’ll rip your eyes out.” Danja later seduces him with sexy backyard sunbathing and garden hose showering. He keeps nervously going inside the house and back out, eating apples until he finally gives in and accepts this incredible offer to do one of those sexy rolling around in bed montages.

I’m not sure how to decode these themes. In the opening scene a couple of jock dudes from the wrestling team tease Stargrove about doing gymnastics. We obviously are intended to side with him against this sissy shaming. And I guess now that I think about it the trans waitress is not necessarily portrayed in a negative light, and Stargrove doesn’t have any sort of homophobic reaction to her. But overall the movie definitely codes the out-of-the-mainstream (Ragnar’s aggressive gender blurring; weirdos with mohawks and leather and motorcycles and skulls and shit) as evil. As Stargrove tries to infiltrate the culture he doesn’t fit in because he’s a pretty boy with normal hair who wears leisure suits and drives a Yamaha. The fringes will not accept this invader so they chase after him on their horse-cycles and spin maces and battle axes at him.

I suppose you could say that he’s this kid who thinks he has it all figured out, thinks he’s better than his dad, but then he’s thrust into the scary adult world. He has to have a job and face different types of sexuality (that turns out well for him) and as he’s attacked by modern barbarians he loses that teenage fearlessness, he realizes that indeed you are never too young to die, i.e. fall off a dam or helicopter or something.

Unfortunately the middle section of the movie is pretty sparse in plot and action, making the whole thing feel surprisingly dull for a movie about what this movie is about. But there’s an amazing twist at the end when they’re in a helicopter and all the sudden Carruthers, who’s been a supporting character throughout the movie, takes off his sunglasses revealing crazy eye makeup underneath, and he says “I’m Ragnar!’ and cackles and squeals in a ridiculous high pitched voice while tearing off his fake red beard and wig and stringing out his long black hair. I have to admit I fell for that silly disguise until not too long before the reveal, but it’s probly even funnier if you spot it from the beginning.

Note: this twist means that Ragnar, at least when in character as Carruthers, refers to himself as a he. That’s why I do. I’m trying to get this stuff right.

Anyway next thing you know Ragnar is on a throne with a cow skull on it making a speech to his “worms” and they bring Lance and Danja out in a cage and pull them out and manhandle them. Stargrove uses a little gymnastics (but I wouldn’t say full on gymkata) to escape and they end up dueling on top of the dam and he wins by (SPOILER) pretending to make a pass at Ragnar and then turning his own fingernail against his own throat. There’s a good dummy drop off the dam with accompanying scream.

At the end Lance kisses Danja goodbye and drives off in a dune buggy. I thought you know, it doesn’t matter how handsome little Stamos is, I do not believe that anybody with the exception of Prince would just say thanks and see ya later to Vanity. Luckily he thinks better of it and comes back to pick her up. Movie saved.

Stamos is one of those actors who it’s easy to be condescending about just because of what we know him from – mostly Full House, but I also remember him from an earlier sitcom called You Again? – but that’s not really fair. Here he has a very easygoing charm and even though it’s hard to believe him acting awkward and unsure of himself it makes us more forgiving of his hunk privilege.

Director Gil Bettman had done some episodes of TV shows like B.J. and the Bear and a Tawny Kitaen movie called CRYSTAL HEART. He later did NIGHT VISION starring Fred Williamson and Cynthia Rothrock. The story is credited to Steven and Stuart Paul – the former wrote KARATE DOG and all of the BABY GENIUS movies for Bob Clark. A guy named Anthony Foutz also worked on it, and IMDb claims an uncredited Lorenzo Semple Jr. (Adam West Batman, THREE DAYS OF THE CONDOR, NEVER SAY NEVER AGAIN). They also have KICKBOXER/LADY DRAGON/POOR PRETTY EDDIE director David Worth as cinematographer and Clint Eastwood regular company member Lennie Niehaus as composer.

The new Blu-Ray looks nice, but if that offends you they also included a shitty transfer from cropped VHS as an extra. (Not joking.) Despite any slow stretches I think you need to watch it and maybe if you’re able to do so with a friend or two it will live up to its full entertainment potential.

David Worth Gene Simmons George Lazenby John Stamos Peter Kwong Robert Englund Vanity
This entry was posted on Thursday, April 13th, 2017 at 11:25 am and is filed under Action, Reviews. You can follow any responses to this entry through the RSS 2.0 feed. You can skip to the end and leave a response. Pinging is currently not allowed.

15 Responses to “Never Too Young To Die”