Well, could’ve been, but this movie is not very good. It’s written and directed by Cannon head Menahem Golan (OVER THE TOP, ENTER THE NINJA) and seems to be his attempt at an all star ensemble movie with some kind of social message, like Irwin Allen used to make. Yeah, it seems like it’s mainly a Chuck Norris movie, but then you see Martin Balsam (Arbogast from PSYCHO), Joey Bishop, Susan Strasberg, Robert Vaughn, Kim Delaney… 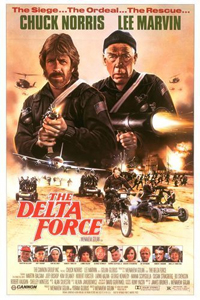 McCoy (Norris) is introduced in one of those Never Leave a Man Behind/We Gotta Get Outta Here It’s Gonna Blow war prologues. He stubbornly loops back and pulls an injured soldier out from under heavy objects, ignoring repeated pleas from Lee Marvin, Steve James and even the injured guy himself. After the rescue it skips forward to years later when the team is about to leave for Beirut, where a hijacked passenger jet is expected to land, and they’re all happy to see McCoy coming back into the fold for this mission. Barely any screen time passed between quitting and rejoining, and we don’t know why he quit or how they got him to come back, so there is no drama created whatsoever. I think they just have to do it because it’s a Norris theme. Instead of being the guy who quit the agency like Seagal he’s the guy who came back to the agency. It’s like he wants to be a rogue but not too much of a rogue. Yeah, he works for The Man, but only because The Man begged him to.

But after the brief Delta Force introduction the movie switches to the airport and the plane, where most of the first hour takes place completely absent Chuck or Lee. Bo Svenson (WALKING TALL sequels) is the pilot, George Kennedy is a priest who’s on board, and I’ll be damned if a ways into it I didn’t think “Man, without the mustache and dark skin that Arab terrorist would look just like– wait a minute, that is Robert Forster!”

This long section of the movie (“The Ordeal” according to the poster) mainly concerns the terrorists trying to figure out which hostages are Jewish, so they can separate them out as V.I.P. hostages or something. That leads to several ham-fisted comparisons between Israeli-Arab relations and Jew-Nazi relations. I guess I gotta give Golan credit for doing something from his heart instead of just phoning it in to get money like many Cannon films, but this shit is not subtle or smart. I got no problem lumping fictional hijackers in with Nazis, I mean, why not? But Golan really works hard to overdo it, having a holocaust survivor couple on the plane, the wife crying “Why is this happening again?”

That’s the other thing – Golan seems to hate Jewish women, portraying them as stereotypical whiny shrews whose husbands have to shut them up and ignore what they say. I mean, one of them is Shelley Winters, who has an outburst on the plane shrieking “There are so many of us and so few of them – why doesn’t somebody do something?” It’s a dramatic United 93 type point except come on, man, she sounds exactly the same as when she’s the played-for-laughs villain in CLEOPATRA JONES.

At almost the hour mark Golan must’ve thought “Oh shit, didn’t I cast Chuck Norris in this thing? Where is he? Is he still here?” So about 40 minutes too late it switches back to being a movie about Delta Force. The plane has landed in Beirut and they let the passengers off, and the terrorists are still on board, and the Delta Force has snuck in and they’re about to pounce on those motherfuckers… until, whoops, Lee Marvin finds out they got more terrorists on board and took some hostages somewhere. So he has to drive a Jeep with a siren to call the attack off.

Oh, come on! We waited 50 minutes for this to turn into a Chuck Norris movie, and you’re already calling it off?

I guess it’s fine because they get to track down the hostages and drive around in different GI Joe type dune buggies and stuff. McCoy drives a super-powered motorcycle that has rocket launchers and machine guns built into the front, and if you’re worried that means it’s gonna be too front-heavy for wheelies well, put your worries away. There are definitely gonna be wheelies.

I don’t know that much about military tactics, but it seems to me like these guys get real lucky. In one scene McCoy acts as a distraction so the others can get away. He stands in a cool pose near a mob of maybe 50 or more angry militants, waits for them to see him and then drives off. And I’m not sure how he could’ve known that they would all try to run after the motorcycle while holding guns and not take any shots at him.

That’s a hell of a long bet he won there, and it’s not like he’s some genius or something. For example at one point he’s up on a roof with a rocket launcher and Lee tells him to throw that thing down and get down here. McCoy looks around like “How the fuck am I supposed to do that?” before thinking “Oh, I got one, I could slide down this wire that happens to be strung up right next to me on the roof and goes down to where Lee is on the ground and is clearly set up for this exact purpose and everybody watching the movie already saw it here before I did.” I’m sure he’s real proud and thinks only a highly trained Delta Force soldier knows these kinds of tricks.

The funniest thing about the movie is the music by Alan PREDATOR Silvestri. All throughout the action scenes they keep playing this theme that sounds like pure triumph. Normally there would be a long period of struggle and they’re almost defeated but then they just barely manage pull it out and only then would music like that play. In this case it plays the whole time as if to admit that the outcome is not in question. Most of the action half of the movie plays like one long victory lap. Even in the one part where a good guy gets hit the music is still going “Rah rah rah! America!”

At the end though it finally plays sad music because the guy who got shot died on the way back (SPOILER). They must’ve killed 200 or more fake Arabs, they got one casualty on their side, seems like a pretty incredible achievement by any scale, but there’s this whole “how dare you celebrate” somber tone. I don’t know, maybe McCoy’s just in a bad mood ’cause he knows he fucked up. He jumped off his motorcycle to get onto the jet (his trademark is not ever being on time for anything) and he knows that superbike technology has fallen into terrorist hands. They’d probly forget to ever use the guns and rockets, but they’d be able to chase him better. We’ll see if that factors into part 2.

DELTA FORCE was actually inspired by a couple real life hostage situations. According to this article the movie originally was gonna be made with the cooperation of Delta Force founder Charles Beckwith, based on Operation Eagle Claw, a failed rescue mission during the ’79 Iran hostage crisis. But Beckwith quit when he found out Cannon wanted to have Chuck actually saving the hostages. (I wonder if they would’ve had Carter get re-elected?) In the final movie the opening is based on Eagle Claw and the rest is based on the ’84 hijacking of TWA Flight 847, down to the German flight attendant who was asked to check the passports for Jewish names, and the Naval officer on board who was killed. In real life the Delta Force were sent in, but the operation was aborted. There were long negotiations, Israel had to release a bunch of prisoners and trade food for releasing hostages, and several of the terrorists got away. So the movie, where Chuck Norris with some help from the other guys saves everybody and personally tracks down, kills and insults the terrorists is, in my opinion, slightly exaggerated.

Also there’s no fuckin way they bought that kid a Cabbage Patch doll in the airport gift shop. I seem to remember you had to pretty much win a knife fighting tournament to get one of those bastards. So that fuckup sinks the movie.

But if you can get past the overlong “ordeal” sequence, the despicable tastelessness of the whole concept of the movie and the utter ridiculousness of pretty much all of the action sequences, then I would actually recommend watching the second half of this movie. It’s got alot of good mayhem and humorous Chuck Norris posturing. For a while I was wondering why they hired a karate champion just to run around with a gun, but he finally does some kicking when he gets alone in a room with terrorist Robert Forster.

McCoy is not so much a character as a prediction of what the parodies of ’80s action movies would be like. (Or maybe just a rehash of his character in the much more consistent INVASION USA). One part really threw me off because he shot a guy and I thought he said “Sleep tight, sinner.” That seemed kinda weird. But when I saw that part again in the trailer I realized it was “Sleep tight, sucker.” Anyway, he says it to a guy that’s hiding under a bed. I don’t know if you get it but it has to do with the idea that one sleeps in a bed, so then he tells him to sleep tight, because the guy is most likely dead due to the bullet wounds, so that’s sort of like offered as an equivalent to getting sleep, in a way. I don’t know, it’s hard to explain but I think if you watched it in context you would get it.

This is a pretty terrible movie, but a pretty funny one. I guess the second half is enough to give it a slight pass. Too bad it’s Lee Marvin’s last movie, though. I hope he at least got a chance to hang out with George Kennedy and reminisce about THE DIRTY DOZEN days.

Here’s some of the music and some clips from the movie that prove that it’s actually kind of awesome despite what I say:

Bo Svenson Cannon Films Chuck Norris George Kennedy Lee Marvin Menahem Golan Steve James
This entry was posted on Thursday, September 9th, 2010 at 1:13 am and is filed under Action, Reviews. You can follow any responses to this entry through the RSS 2.0 feed. You can skip to the end and leave a response. Pinging is currently not allowed.

74 Responses to “The Delta Force”