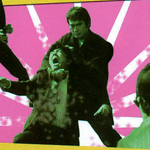 But they pay him with a briefcase full of shredded newspaper, which was not the deal in my opinion, so he fights them and they’re enemies now.

The gangsters escape with what they wanted: an incriminating tape they use to confront a politician (Fuyuki Murakami, GOJIRA). After a long conversation in front of a big tiger mural, Tsurugi’s voice echoes through the room like he’s the fuckin Shadow and then he bursts through the wall like a football team through a paper banner and grabs the tape. He’s going rogue!

One of the bosses, Aya (Reiko Ike, SEX AND FURY), decides to hire a dude she saw on a That’s Incredible! type tv show to go after Tsurugi. Frankie Black (Dorian Howard) is an ex-Chicago mobster in a mariachi outfit (including sombrero) who claims to use psychic powers to break chains and stuff. When he attacks Tsurugi he exposes it as a trick using lasers and makes fun of him for being a phony, apparently having also seen the TV show. 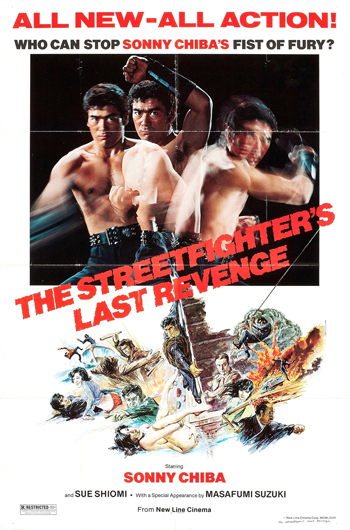 Another new aspect of the operation: sort of like the JOHN WICK movies, there are operators who direct his phone calls and are interested in his adventures. One of them gets a crush on him from his voice, tries to ask him out, later meets him at a jazz club. But he doesn’t want to endanger her, and scares her off by disguising himself as Dracula (who he told her on the phone he looked like). I like how she’s kind of a regular person who’s in way over her head trying to step into Tsurugi’s world.

This is the only one where he doesn’t have a loyal assistant, but it seems like he’s about to get one. Huo Fong (Sue Shiomi, who stars as a different character in the SISTER STREET FIGHTER series) is introduced in a fedora and sunglasses with her hair up, but I wasn’t surprised she was a woman! She calls herself “A Firebird from Taiwan, a lone wolf killer like you.” He calls her “grilled chicken” and tells her “put on your makeup and start husband hunting.” Which I disagree with. She fights him well and feels “disgraced” when they hire Frankie Black to work over her so she gives the gangsters back their money, beats them up and go to join up with Tsurugi. He brushes her off and just when she seems to gain his respect by dropping onto his car from the top of a tunnel she gets shot to death. Bummer.

I was a little worried that part 1 and 2’s best supporting player, the honorable karate master who knew his dad Masaoka (Masafumi Suzuki) was sitting this one out, but they find a good use for him. Tsurugi comes to the dojo and shows him a distinctive move done on him in a fight he lost (to a corrupt prosecutor!). Masaoka identifies it as an Okinawan style called ‘Big Tsunami,’ teaches him some related moves and counters, and fights him in that style to prepare him to win in the rematch.

(And I’ll be damned if they don’t reuse his childhood flashback again – it’s in all three movies!)

I guess maybe there’s not as much gore as in the other ones, but there’s a fight at a funeral home where he just tosses Frankie Black into the cremator. Cold-blooded. That guy was a TV star! I wonder if he ended up in the in memoriam montage on the Emmies the next year? There’s also a part where Tsurugi’s holding his hands together and they’re covered in blood and I believe this means he ripped a guy’s heart out, but if so we don’t get a good look at the organ.

He does manage to sleep with Aya, stupidly falling for a ploy to steal back his suitcases of money. But he still likes her and feels bad when he accidentally car bombs her. There’s another fight in the rain at night, but they mix it up by ending in the daylight on a clear day.

The version on Shout Factory’s excellent box set includes the four-minutes-longer Japanese cut. They had to cut in standard definition footage to recreate it, so you get to wonder why the fuck they would cut out some of the explanations of what’s going on, including the opening scene.

This is probly the least of the trilogy, and yet it is magic. Let me tell you how Tsurugi answers the phone. He’s hanging upside down for some exercises when the phone rings, so he walks on his hands across the room, drops into a somersault, kicks the receiver off the phone and catches it in his hand. And the people calling don’t even know he did something that awesome. They just hear him say hello. So this is a good movie.

Let’s celebrate this excellent trilogy by listening to the theme song by Toshiaki Tsushima (THREE OUTLAW SAMURAI, THE GREEN SLIME, BATTLES WITHOUT HONOR AND HUMANITY).

Akira Shioji Fuyuki Murakami Reiko Ike Sonny Chiba Sue Shiomi
This entry was posted on Thursday, September 26th, 2019 at 10:44 am and is filed under Action, Martial Arts, Reviews. You can follow any responses to this entry through the RSS 2.0 feed. You can skip to the end and leave a response. Pinging is currently not allowed.