A couple weeks ago the United States Congress finally squeaked through the Baby-Steps To Health Care Reform legislation, a bill that does several good things such as not allowing insurance companies to refuse coverage to people because of a pre-existing condition, giving tax credits to small businesses that provide health insurance for their employees, and letting kids in their twenties stay on their parents’ insurance a couple more years than before. Unfortunately, too many Democrats are in the pocket of the insurance companies and they were too insistent on bending over backwards to find every possible compromise that could conceivably tickle the fancy of a Republican (a year long torture session that netted them a grand total of zero Republican votes) so the reforms aren’t as strong as most people would like.

So we’re still stuck with a health care industry instead of a health care system. It’s run by companies that are trying to maximize profits, which is a conflict of interest. I mean, what if we had a for profit fire department, and they’d only be willing to put out certain types of fires that required less water, and even then only if the people inside are already paid up? You can try that system if you want, but I’m against it. I prefer that it’s a public service paid for by taxes. I guess that makes me a commie. Come get me, puny American. I must break you. 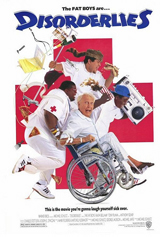 There is a movie that exposes the dangers of for-profit medicine – a powerful story with sharp, incisive satire and a well researched look at exactly how the business works and why it fails us. Or maybe I imagined that movie, so instead I watched DISORDERLIES.

The Fat Boys, playing themselves, are working at the world’s worst nursing home, but they’re fired for stealing 16 chocolate cakes for the third time this week. Meanwhile, in Palm Beach, Florida, a Malcolm McDowell-esque rich dude is hoping his sick uncle Albert will die so he can pay off the gangsters he owes gambling money to. He finds out about the Fat Boys and hires them to watch Albert, figuring their incompetence will make it easy to get away with murdering him.

I think I can see what the producers were thinking: we have here a comedy team for the ages, a Three Stooges for the ’80s. I mean, think of all the similarities. Three Stooges = 3 members. Fat Boys = 3 members. And etc. Throughout the movie they bicker and slap each other, with Flinstones sound effects. They fall down or get a boner and it goes BOINGGG!!! They eat lots of pizzas and use slang like “def.” Then Uncle Albert says a couple things like that, and he listens to the Fat Boys on a Walkman and snaps his fingers. Because get it, you’d never expect an old rich white guy to do that. The walls of class and race are crumbling.

This would be a funny double feature with NOTORIOUS to show how far fat rappers came in less than 10 years. Funny as in “interesting” though, not as in “you will laugh at the funny jokes.” Although Prince Markee Dee (the less fat Fat Boy) does get to date one of the maids, there’s nothing else dignified here. They get bit by a doberman, they cause a ledge to break while peeping on skinnydippers, they do stupid things like steal plates at a charity dinner because they hear it’s a $1000 a plate dinner. Despite theire job they don’t have any medical knowledge. The only way they help Albert is by losing his pills by using them as gambling chips, then it turns out he was overmedicated. They were lucky too because they acted like little kids and wouldn’t fess up that they lost the pills, even though they thought he was gonna die. These are not the disorderlies I would want working for my elderly uncle. They do take him to a roller rink and get a girl to sit on his lap, I guess that’s something.

THere are a couple points where the strength of their street knowledge comes in handy. True, they do wear Hawaiin shirts, but they’re from Brooklyn, so they know how to use a coathanger to commandeer a police car from the back seat and take it for a high speed drive in reverse. They somehow escape and impersonate police officers, pull over a white guy in a Cheap Trick t-shirt and steal his car. Later they find a huge arsenal and smile slyly when they’re walking around with machine guns and bandoliers. Luckily they decide to put the guns away after one of them is frightened by a cuckoo clock and plugs it like they did those trees in PREDATOR.

The score is by the group Art of Noise, who also collaborated with Max Headroom. It’s funny because sometimes they’ll do serious dramatic cues, like when Markee Dee finds video proof of the murder plot. But then he trips over a taxidermied dog, the tape flies into the fireplace and it goes BOINK!

One thing that’s weird: they never mention being rappers. But about 50 minutes in they find a camcorder and “make a video” of themselves lip synching their song “Baby You’re a Rich Man.” Later “Wipeout” plays on the soundtrack, and there’s occasional beatboxing.

I’m not sure what I think about the Fat Boys. They did alot of crappy gimmick songs, like “Wipeout” and the rap version of “The Twist” with Chubby Checker and the official Freddy Krueger rap that wasn’t as good as the unofficial one by DJ Jazzy Jeff and the Fresh Prince. But just as vocalists they were pretty good for rappers of that era. They had some skills on the mic, if not in the hospital. They shoulda stuck with the day job.

So we have learned a few things:

1. When somebody can make more money by not giving good health care, that can cause problems.

2. At one point it was considered hilarious to watch fat guys cram fistfuls of cake into their mouths.

3. DISORDERLIES would be a really clever title it it wasn’t just shortened from THE DISORDERLY ORDERLY.

And that’s what I have to say about health care and the Fat Boys. 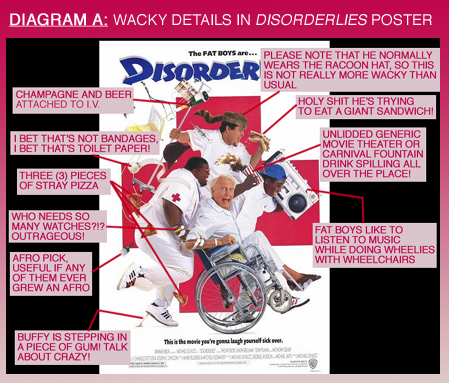 hip hop
This entry was posted on Wednesday, April 14th, 2010 at 12:12 pm and is filed under Comedy/Laffs, Reviews. You can follow any responses to this entry through the RSS 2.0 feed. You can skip to the end and leave a response. Pinging is currently not allowed.