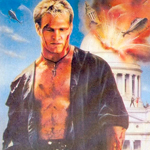 There is a certain type of action movie I love where it’s more important to be awesome than grounded; where the knowing use of cliches, absurd physics and extreme exaggeration are part of the agreement between the film and the audience. These are movies that are almost impossible to truly make fun of, because their ridiculousness is not a drawback, even when it’s an accident. They make you laugh but you’d be lying if you said you were only enjoying them ironically. Classics of this type include Schwarzenegger’s COMMANDO, Van Damme’s HARD TARGET and Seagal’s HARD TO KILL.

Those are lowbrow movies that are justly acknowledged as classics in the right circles, but I come to speak to you of a slightly more disreputable one, a poorly reviewed box office flop starring a controversial ex-NFL player. When Brian Bosworth was drafted to the Seattle Seahawks in 1987 he had a contract that was the biggest for any player ever on the team as well as the biggest for a rookie in the history of the NFL. He quickly became hated by other teams for his public trash talking and beloved by Seattle children for his audacious hairstyle and cartoonish persona. Then he was injured, retired after two seasons and decided to become a movie star.

Seattle Times columnist Steve Kelley felt spurned by the Boz’s turn, writing at the time, “To call STONE COLD garbage is to give garbage a bad name. . . . Do yourself a favor. Don’t buy Boz’s baloney. Don’t go to this movie. Don’t fall for the Bosworth pitch. He is as much a fraud on the big screen as he was on the gridiron.”

Kelley got his wish. “The Bosworth pitch” fell on deaf ears. Though the Boz is still acting, all of his subsequent starring vehicles were low budget direct-to-video obscurities. His consolation prize: sports columnists back then didn’t know shit about action movies, and to this day there is nothing like STONE COLD. I think it rivals ROAD HOUSE as one of the best macho movies full of absurdity too crazy not to laugh at but too perfect to be an accident. It’s one of my favorites. 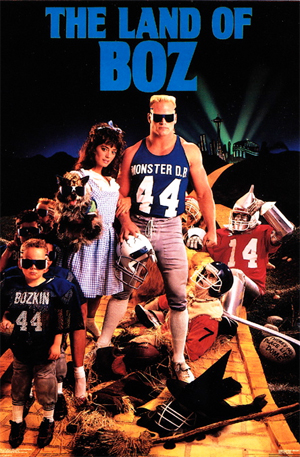 Like Mr. T before him and Dennis Rodman after him, Bosworth had created his own freaky style that made him iconic. “Boz cuts” (bleach blond flat top mullets with designs shaved and sometimes painted in the side) were a fad in Seattle, and his taste in flamboyant jackets and patterned pants was more like the WWF than the real world. In STONE COLD he’s introduced with an eccentric lifestyle where he makes smoothies for a pet monitor lizard name Fido and walks around the house in bikini underpants. One of his jackets has a strip of white fur hanging over the shoulder that acts as the mohawk to a painted-on skull.

Yet underneath the show-offy flair is a square-jawed leading man who co-stars would compare to John Wayne and who in later years would bring a good old fashioned presence to B (and lower) grade movies like Kurt Wimmer’s ONE MAN’S JUSTICE and Fred Olen Ray’s MACH 2.

Bosworth’s character Joe Huff, alias John Stone, is a suspended cop forced to go undercover in a biker gang called The Brotherhood. These guys are expanding their drug trade and have threatened to assassinate the D.A. who’s trying to get the death penalty for a member who got busted for killing a priest. Stone is the only guy the FBI knows of who can hang with them.

A good action hero needs a worthy adversary, and for his maiden voyage Bosworth receives a one-two punch of top shelf villainy. First we meet Ice, played with spiteful, mad dog abandon by William Forsythe (ONCE UPON A TIME IN AMERICA, OUT FOR JUSTICE). Stone gets his attention by insulting him in a bar, beating up some guys for him, defeating him in a motorcycle race, and winning a bare knuckle fight at his rally. They do not become friends. But it’s enough to pique the curiosity of Brotherhood leader Chains, played by the great Lance Henriksen (HARD TARGET), who gambles on him as a henchman, saying he’s “either gonna be the biggest pork chop I ever ate, or my bulldozer.”

According to the book Not Bad For a Human by Lance Henriksen and Joseph Maddrey, Chains was originally written to be constantly quoting the Bible, but Henriksen convinced director Craig Baxley to allow him to improvise the entire role. Though he’s appeared in acclaimed movies from DOG DAY AFTERNOON to ALIENS, Henriksen considers Chains to be one of his best roles. 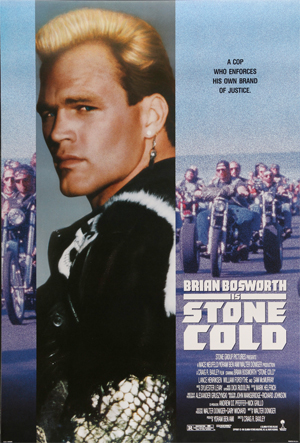 But just as much as the larger-than-life characters and performances I believe it’s Baxley’s energy and deliberate lack of restraint in the staging of action that makes STONE COLD special. Brought in to replace original director Bruce Malmuth (HARD TO KILL, PENTATHLON), Baxley’s resume boasted not only of ACTION JACKSON and I COME IN PEACE, but a lifetime in the family business of stuntwork. He was stunt coordinator for THE WARRIORS and 2nd unit director for PREDATOR, among other heroic deeds.

Here he delivers on that background big time. Small bits of action are precision-tuned for maximum impact. When the priest is shot during the opening credits he’s propelled backwards through a stained-glass window, revealing for a moment an audience of bikers sitting patiently outside to enjoy the show. When Stone tricks a grocery store robber into slipping on a puddle of vegetable oil the poor sucker slams into a canned food display like he was fired out of a cannon, and Stone is posed casually to the side like Bugs Bunny might do in a similar situation.

This is One. Perfect. Shot of course, but like all great movies, this has more than one perfect shot. If I were to choose a single sequence that best sums up the STONE COLD vibe it would have to be the one where Stone shoots a biker who’s commanded to “take the fucker out” by driving straight at him in the marble halls of the Mississippi State Capitol (long story). The rider drops dead, the bike glides past Stone, crashes out a window, launches through the air into a helicopter driven by an evil soldier (another long story), which explodes into flames and drops straight down onto a parked car, which explodes into even bigger flames.

That’s the Baxley touch. Most guys would’ve just had the bike skid out.

Whenever shit pops off, Baxley and his stunt team don’t chump out, they go the extra couple miles, especially in the fiery explosion department. In this world everything explodes. Mafia rivals don’t do drive by shootings, they toss grenades. During a high speed chase Ice turns around and fires a machine gun at a random patrol car behind him. We first see bloody squibs go off on the officer’s chest, then the car explodes. Stone causes a truck full of $1 million worth of drugs to crash, and it explodes. He causes Ice to crash into a car, and that explodes. But enough of the body survives for the gang to prop him up on his bike for a viking funeral. Hell, the whole movie is a viking funeral to the over-the-top action movies of the ’80s.

Although it came out in 1991, STONE COLD kinda feels like the culmination of the great traditions of the previous decade, before we moved into the era of slicker, more expensive studio-made ones like TERMINATOR 2: JUDGMENT DAY, UNDER SIEGE and IN THE LINE OF FIRE. You have your star who, like Schwarzenegger, Van Damme, Seagal and Norris came out of sports before movies, and who leads with his persona and physical presence more than his acting prowess. You have your over-the-top evil villains who rarely stop coming up with wicked things to do: randomly shoot a priest during a baptism, hand deliver a gift-wrapped motorcycle – with a head inside – to rivals dining at a fancy restaurant, mangle a loyal follower’s hand in a spinning motorcycle wheel for briefly questioning a murder. You have your comic relief sidekick (RAISING ARIZONA’s Sam McMurray in a pretty unobtrusive role as a germophobic FBI agent). There’s even a COBRA style opening (hero casually foils maniacs robbing a grocery store) and a DIE HARD style ending (gun-shy nerd partner saves the day when villain unexpectedly pops up to attack again).

But also it subtly subverts the formula. At the end the bad guy is dead, but only after a successful terrorist attack in which he assassinates the district attorney/gubernatorial candidate and Supreme Court justices while disguised as a priest. The witness/love interest is dead too, and it’s unclear if the biker/mafia alliance has even been stopped. The credits roll out over one long shot of Stone, scraped, bloody and dazed, walking away from the Capitol as a swarm of police and reporters scramble to figure out what the hell just happened here. Only the electric guitars on the soundtrack suggest a victory.

Well, that and the hair. Maybe he fucked up this time, but it’s clear that The Boz is walking out of there with his awesomeness intact. Long live The Boz.

Brian Bosworth Craig R. Baxley Lance Henriksen William Forsythe
This entry was posted on Wednesday, November 7th, 2018 at 10:09 am and is filed under Action, Reviews. You can follow any responses to this entry through the RSS 2.0 feed. You can skip to the end and leave a response. Pinging is currently not allowed.

20 Responses to “Strictly Bozness: The Fiery Majesty of STONE COLD”