Cobretti struts in wearing sunglasses and chewing on a matchstick. You’d think he’d want to have the full power of vision at his disposal in a situation like this, but he chooses fashion instead – not a great character trait for a human being, but acceptable for an action movie hero. If you want to get picky Dirty Harry probaly should’ve put down his hot dog to foil that bank robbery, but he didn’t, and we admire him for that. 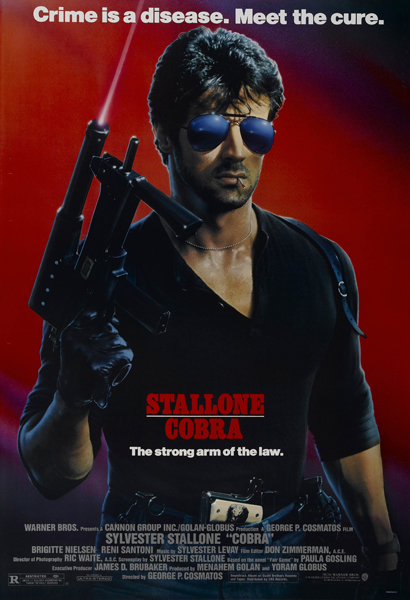 Speaking of Dirty Harry, Cobretti wishes he was Dirty Harry. This movie is a total ripoff of that one. But visually Cobretti reminds me of another action movie icon: HARD BOILED’s Tequila, with his sunglasses and toothpick. That must be why when I first heard of Chow Yun Fat they said he was “the Stallone of Hong Kong.” People still remembered COBRA back then, I guess. They look kind of the same, but Cobretti has a picture of a cobra on the pearl handle of his gun, while Tequila doesn’t have a picture of tequila. Tequila is still a better character in a way better movie, but Cobretti’s cobra insignia just edges him into the realm of acceptability. Congratulations, Cobretti.

The movie is stylishly directed by George Pan Cosmatos, same guy who did RAMBO a year earlier. He uses what was probaly called “MTV style” back then, lots of quick flashes edited to the rhythm of music (hey, what’s that robot? Hey, there’s that robot again. Why is there a robot?) but unlike modern asshole editors he respects the audience enough to build to a shot that explains what the quick flashes were all about (oh, I see, there is a fashion shoot in front of a robot). The opening is completely badass, with the Cobra firing an animated bullet into the camera, which explodes into the title of the movie. Meanwhile a psychopath rides a motorcycle silhouetted on a bright red sky, and this is intercut with shots of a bunch of crazy musclemen in a sewer doing some sort of workout or ritual involving axes. This was in those days of ’85-’87 when movies like POLICE ACADEMY 2 and DRAGNET worried that some weird gang of punk rocker cultists would terrorize urban areas (at least those movies are comedies, though, this is a serious movie).

When I saw the motorcycle I first thought it was Cobra and when I saw the sewer I thought this was gonna be Stallone’s PUNISHER. But nope, he’s a Dirty Harry wannabe, a tough envelope-pushing cop constantly frustrated by all these bureaucrats and regulations that are so hung up on all this “accountability” and “checks and balances” and “system of American justice” and what not. You know how they are. The sergeant is played by Dirty Harry’s partner Reni Santoni and the pain in the ass pansy boss is Andrew Robinson, who was Scorpio in DIRTY HARRY. So the killer that we gotta break the rules to catch is now the guy telling us not to break the rules. THE SYSTEM IS BROKEN! CALL IN THE COBRA!

But Cobra doesn’t have just one Scorpio to catch, he has “the Night Slasher” which is actually the collaborative work of those ax maniacs in the sewer, crazed bodybuilding enthusiasts like Brian Thompson trying to bring a “new world” of mayhem and chaos. Demon Dave could be a member. Brigitte Nielsen (looking more like Kelly LeBrock than the Grace Jones type I remember her as) plays a super model who witnesses a killing and becomes their target. So the Cobra ends up protecting her, and various action happens.

Cobretti drives an old Mercury with a license plate that says some variation of “AWESOME” on it, which was probaly pretty awesome at the time. There’s a pretty good car chase, one of those ones where they’re going up and down little hills and start to get air, and at one point the Cobramobile actually catches so much air it scrapes across a hanging sign and shoots sparks everywhere.

Another good part is when Cobretti impales the villain on a hook, Leatherface style, and rolls him into a smelting plant. So there’s plenty of good stuff here, but it doesn’t add anything very new to the DIRTY HARRY formula, and it’s definitely not as good as DIRTY HARRY, so it doesn’t really overcome the paranoid politics. When Cobra comes out of the super market and a prickish reporter starts asking him pesky questions about what gives him the right to just kill people instead of using the ol’ due process, the movie is pushing it. We already had that conversation in the ’70s, Cobretti. Why don’t you go watch MAGNUM FORCE.

Notes: Before Eddie Murphy was cast in BEVERLY HILLS COP it was gonna be Stallone, and he was rewriting the script. That didn’t work out so he used some of those ideas for COBRA. Also, COBRA was based on a book originally called A RUNNING DUCK that was later made into the movie FAIR GAME starring Billy Baldwin and Cindy Crawford.

George P. Cosmatos Sylvester Stallone
This entry was posted on Wednesday, July 11th, 2007 at 11:23 pm and is filed under Action, Crime, Reviews, Thriller. You can follow any responses to this entry through the RSS 2.0 feed. You can skip to the end and leave a response. Pinging is currently not allowed.