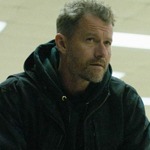 What I really didn’t expect is how stylized it is. Not in the visuals, but in the writing. This is like the Sparrow Creek Militia For the Gifted. They all think and talk on 1.5x speed, like they’re in an Aaron Sorkin show. That’s why I didn’t get hung up on “okay, they’re not saying it now but I’m positive these assholes use the n-word.” Just because first time writer/director Henry Dunham researched gun lingo doesn’t mean he’s going for realism. I’m sure a real militia isn’t entirely made up of toothless yahoos, but I also don’t buy that many (or in this case every single one of them) are high vocabulary, highly functioning geniuses, full of knowledge, skills, and the ability to quickly strategize, problem solve, debate, and engage in witty banter under extreme pressure. There’s a weird young loner kid (Robert Aramayo, NOCTURNAL ANIMALS) who they all believed was mute who suddenly starts talking, and even he loves engaging in verbal combat, speaking fast, enunciating strongly, and using words like “acuity.”

So it feels more like a Rod Serling teleplay than a real life situation or standard movie. And once you accept that, it’s a good little… movie play or whatever. 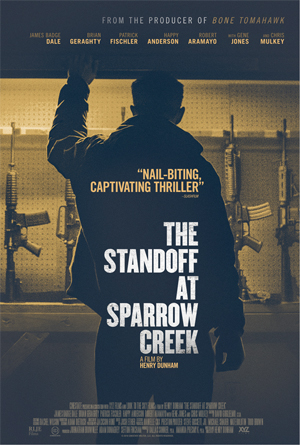 James Badge Dale (THE GREY, IRON MAN THREE, THE LONE RANGER) gets a real grizzled-and-gravelly showcase as Gannon, the disillusioned former cop who hears gunshots and explosions while he’s in his trailer one night and calls his fellow militia-men (on an old flip phone!) to meet at “Sparrow,” which is not a creek, by the way, but a big lumber warehouse. I kinda like the working title THE INCIDENT AT SPARROW CREEK LUMBER.

So these seven guys show up and banter about what’s going down and what they have to do about it. Word is somebody shot up a funeral. A police funeral. With an AR-15. They said it was a “militia man.” Doesn’t matter if they’re wrong, as long as that’s what they believe. They’re gonna come looking for other militia men. Besides, who else around here would have an AR-15? And then they go into their armory where they keep them hung up on the wall, numbered one through twenty. And one is missing.

(It’s actually the gun stuff that seems most button-pushing. They even mention bump stocks. Apparently there was an earlier cast that quit after one of the mass shootings. Maybe the Vegas one. Maybe another one.)

Everyone seems convinced that one of them had to have shot up those cops, and they want to find out who so they can turn them in and save themselves. So Gannon, using his skills learned in law enforcement, chooses two suspects to separate and interrogate. He has all kinds of tricky tactics. Matlock shit. And like a cop in an action movie he’s given a time limit from the chief, or in this case the leader of the militia, Ford (Chris Mulkey, FIRST BLOOD, QUIET COOL, GHOST IN THE MACHINE, BROKEN ARROW, THE PURGE, WHIPLASH), who gives him one hour (or two? I forget) to get a confession. If he doesn’t, Ford is gonna literally hang his suspect, Noah (Brian Geraghty, ART SCHOOL CONFIDENTIAL, BOBBY, THE HURT LOCKER, FLIGHT).

An obvious inspiration is RESERVOIR DOGS, with Beckmann (Patrick Fischler, RED STATE) as a nerdier Mr. Pink. You got your group of characters who don’t know much about each other’s outside lives, arguments, tensions, suspicion of a mole, audience knowledge of an undercover cop who we don’t want to get found out, revelations coming out in dialogue, limited location with occasional flashbacks elsewhere. This is a much bigger warehouse, though, with varying rooms.

Many things seem contrived, but not painfully so. All the characters seem to have some secret backstory that they can be pushed into using as a false confession. I know that sort of thing happens, but I didn’t follow how it happened here. I also didn’t understand why they stood next to the garage doors, flashlights on, listening to the cop checking each one, potentially seeing their feet through the two inch gap. But only seeing his shoes and shadow and hearing him strongly evoked what it feels like trying not to be detected, heart beating fast, trying not to breath loud, trying to be ready for what might happen. So it’s an effective set piece.

It gets a little USUAL SUSPECTS by the end. The full explanation of what’s going on is even more far-fetched than anything I’ve already discussed, but I think I liked that more than if it had been something more obvious.

It’s a serious movie that I think is a little silly. But the performances, the filmatism and the overall vibe are potent enough to make me excited to see what Dunham does next.

Brian Geraghty Chris Mulkey Cinestate Henry Dunham James Badge Dale militia Patrick Fischler Robert Aramayo
This entry was posted on Tuesday, September 24th, 2019 at 11:30 am and is filed under Crime, Reviews, Thriller. You can follow any responses to this entry through the RSS 2.0 feed. You can skip to the end and leave a response. Pinging is currently not allowed.

5 Responses to “The Standoff at Sparrow Creek”