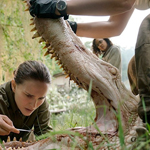 In ANNIHILATION, the sophomore directorial work of Alex Garland (EX_MACHINA, also author of The Beach and screenwriter of 28 DAYS LATER, SUNSHINE, NEVER LET ME GO and DREDD), Natalie Portman (LEON THE PROFESSIONAL) takes a journey into the heart of weirdness. Her character Lena is a cell-loving ex-Army biology professor at Johns Hopkins University (also the alma mater of Gil Scott-Heron, Wes Craven and Wolf Blitzer) whose presumed-K.I.A. husband Kane (Oscar Isaac, SUCKER PUNCH, THE NATIVITY STORY) suddenly shows up alive and odd and unable to explain anything. Sort of like the also mourning Amy Adams character in the also brainy-adapted-from-an-acclaimed-novel-sci-fi-movie ARRIVAL, she’s taken to a site (Area X) where soldiers and scientists face an unexplained, unprecedented phenomenon. In this case it’s not a spaceship but a sort of slowly expanding spectral bubble they call “The Shimmer” that surrounds a chunk of land and no one who has entered it has ever come back out. Until Kane. END_OF_DOCUMENT_TOKEN_TO_BE_REPLACED

Caleb (Domhnall Gleeson, TRUE GRIT) is a lowly code-writer for the giant search engine Bluebook who wins a contest and/or is mysteriously summoned to spend two weeks with the reclusive company founder Nathan (Oscar Isaac, THE NATIVITY STORY) at a high tech laboratory/compound/bachelor pad out in The Middle of Fuckin Nowhere, Norway. It turns out here’s there because Nathan has built an artificially intelligent robot and wants someone to talk to it and test if he considers it to be conscious or not. END_OF_DOCUMENT_TOKEN_TO_BE_REPLACED 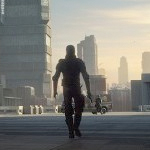