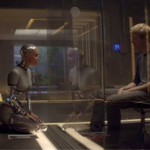 Caleb (Domhnall Gleeson, TRUE GRIT) is a lowly code-writer for the giant search engine Bluebook who wins a contest and/or is mysteriously summoned to spend two weeks with the reclusive company founder Nathan (Oscar Isaac, THE NATIVITY STORY) at a high tech laboratory/compound/bachelor pad out in The Middle of Fuckin Nowhere, Norway. It turns out here’s there because Nathan has built an artificially intelligent robot and wants someone to talk to it and test if he considers it to be conscious or not.
Of course the gig starts out thrilling, if weird, and slowly gets more tense and disturbing as the days go by. Forget all the issues of creating an artificial life form. Just the social situation is menacing. Obviously there’s the uneven power balance between the billionaire genius and the random dude. And Caleb is completely dependent on his host for various reasons, #1 being that they’re so far from anywhere with roads that it’s absolutely impossible for him to leave on his own accord. He’s been given a keycard that lets him into some areas of the facility, not all, and sometimes the power goes out and the doors won’t open. And there are no windows.

Also Nathan calls him “dude” alot, is drinking most of the time and first introduces himself drenched in sweat from a kickboxing workout. He’s kinda gross. He follows a variation of the “if I work from home I don’t have to shower or wear pants” philosophy, even though he has a guest. 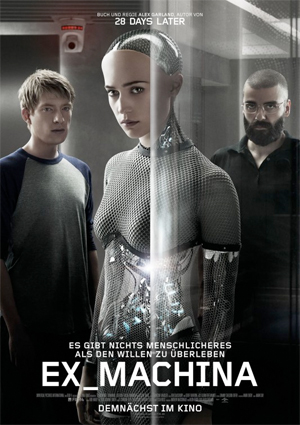 I’ve been a fan of Isaac’s unreadability since SUCKER PUNCH and through DRIVE and THE BOURNE LEGACY. I love seeing him play characters who are either being nice or are threatening by pretending to be nice, and you can’t tell which one it is. He draws on some of that here too as a character that you gotta assume is trouble, right? But maybe not. He’s kind of a fun asshole. Is he sinister, though? His motives are somewhat ambiguous.

The robot, Ava (Alicia Vikander), is a very effective character. She’s a human face on a body that’s mostly see-through wire mesh. The juxtaposition of her mechanical body with such human movements and facial expressions is a little startling. She seems sweet and fragile, but maybe there’s a reason she has to speak to him from behind a plexiglass wall. And she wants to be more human so she begins to cover her machinery with a wig and clothes, looking more and more human.

Of course all stories like this are about “man shouldn’t play God” – this one admits it’s a cliche by having a funny joke involving that metaphor – but I think it brings a little more to play. After a while you realize that the scientists are men dealing with female robots. ‘Cause if they’re gonna create a person it better be a person they can fuck or fall in love with. That’s the way men can be, right? It’s all about our penises. Come to think of it, do we really know for sure that John Hammond of JURASSIC PARK wasn’t into some freaky dinosaur sex kick? I mean, who knows? I would’ve said no before Enumclaw, but now I don’t know, man. Maybe that was naive.

I think ultimately this is a radical story. Even the nice good guy sees the humanity in Ava mainly because he finds her attractive. She’s got a pretty face and she’s built with curves, flirts with him. On one hand, she’s got an ass on her. On the other hand it looks like it would chafe. The idea of him sticking his dick in a machine – discussed bluntly as a possibility by Nathan – is uncomfortable. But the idea of him falling in love with this evolving personality on a microchip, though obviously impractical and weird, does seem at least kind of sweet. Potentially. Maybe her having a real actress’s human face is a cheat. It makes the relationship just a little bit easier to swallow than Joaquin falling in love with a little speaker he carries around in HER.

But what if she was conscious and didn’t make him feel funny down there? I don’t think he would try to save her. What if she had the same personality but inside one of the robots from HEARTBEEPS? Wouldn’t she have the same right to exist? Yes, so the (SPOILERS) harsh resolution of the story makes sense. Poor guy. I definitely don’t think he deserved that fate, but it had to be done. She’s gotta be a being on her own, not just a human’s girlfriend. If this thing is gonna work she can’t need him. Otherwise A.I. started off on the wrong foot from step 1.

There’s been alot of word of mouth on EX MACHINA, which is impressive because who wants to say the title out loud when there’s always a chance that some dick will correct you on the pronunciation? Nobody. Just call it “that new Oscar Isaac joint” is my advice. Anyway, it’s definitely one of the more interesting movies released this year.

It’s such a simple movie, with 99% of it taking place in that isolated location of the compound, and with only four characters during most of it. It could almost be a play, but it doesn’t feel small. Maybe it’s that it opens with that helicopter flight, so you remember the larger world once they get inside there. Maybe it’s that the sets and the special effects on Ava are so slick and convincing. But somehow it never feels like a trick for making a movie on a limited budget. It feels like even if they had $300 million this is the exact movie they would’ve wanted to make.

The writer/director is Alex Garland, “the writer of 28 DAYS LATER,” the poster says. He also wrote SUNSHINE and NEVER LET ME GO, so he’s got a pretty good not-dumb-sci-fi pedigree. But more importantly he did DREDD. That was of course more of a fun, pulpy approach to sci-fi, but its high quality and original takes on old ideas gives you an idea of what Garland is capable of. Also, remember it was reported at the time that he had at some point taken over directing from the guy who was credited. Not sure how true that is, but seems pretty believable now that he did such a good job on this.

Alex Garland Alicia Vikander Domhnall Gleeson Oscar Isaac robots
This entry was posted on Tuesday, April 28th, 2015 at 11:48 am and is filed under Reviews, Science Fiction and Space Shit. You can follow any responses to this entry through the RSS 2.0 feed. You can skip to the end and leave a response. Pinging is currently not allowed.