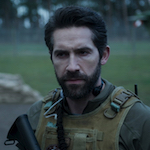 This one is not from Jesse V. Johnson or Isaac Florentine, but rising #3 most prolific Adkins director James Nunn (GREEN STREET 3, ELIMINATORS). And as you might guess from the title, yes, it is a movie like ROPE or RUNNING TIME designed to look like it was filmed in one continuous shot. I know there are some who don’t like that approach, so I will say in its defense that it doesn’t come across as flashy or show-offy at all (not that I would see that as a bad thing, personally) and the real time feeling serves to heighten the tension of its siege scenario. And in case you were wondering there is an organic explanation of the title (the protagonists believe they are defending their “one shot” to stop a terrorist attack).

Adkins plays Jake Harris, a Navy SEAL leading the small team escorting CIA analyst Zoe Anderson (Ashley Greene, who I should’ve recognized as Alice Cullen from all the TWILIGHT movies, or from ACCIDENT MAN) to a CIA black site to pick up a prisoner, Amin Mansur (Waleed Elgadi, FOUR LIONS). Mansur swears he’s innocent, a British citizen and business man swept up by mistake. The transfer is held up by the boss at the site, Yorke (Ryan Phillippe, CRIMSON TIDE), and his second in charge Shields (Terence Maynard, REIGN OF FIRE, AVENGEMENT) is also skeptical of the request. There’s tension when Zoe goes to talk to the prisoner and seems disgusted by the abusive conditions they’re keeping him in. It seems like maybe she’s here to save him until she insists to the others that she’s tied him through his medical scanner export company to a plot to set off a dirty bomb in Washington DC during the State of the Union. She doesn’t have a moral objection to torture, she just doesn’t think it’s effective, and has another plan for getting him to reveal the location of the bomb before it’s too late. 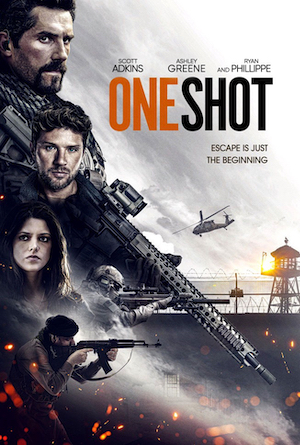 But maybe too late is already here because a truck full of Algerian terrorists rams through the front gate and starts massacring the troops and freeing the prisoners. So these characters get trapped inside with disagreements about whether or not Mansur is who they say he is, what to do with him, and the best way to get out. The attackers are looking for him, presumably to kill him before the Americans can get the information out of him. At first I wondered if there was more to it, a conspiracy or a twist about who they are and what they’re up to. Then they start questioning and executing non-combatant secretaries so it seems pretty clear yep, they’re terrorists.

Harris, sometimes with friends, sometimes on his own, sneaks around, gets in shoot outs. He has a knife, there’s alot of stabbing. It’s obviously gotta be hard to block all that out and perform it flawlessly with the long takes and no visible edits, but I honestly didn’t have that on my mind at all while watching it. That means it’s well executed, though it also means it’s never as complex or spectacular as, like, those scenes in CHILDREN OF MEN, and never had my heart pumping like those did.

I’ve seen many calling ONE SHOT the action movie of the year and one of Adkins’ best. I purposely didn’t watch the trailer and stayed so spoiler free I didn’t even know it was a military movie, which was a big mistake, because I would’ve adjusted my expectations. When I hear “one of Adkins’ best” my mind goes to great fight scenes, and great buildups to great fight scenes. This is not a martial arts or fight movie at all – it’s not until the last 15 minutes that he even punches anyone. It climaxes with a very well done realistic fight (the choreographer is Tim Man, who has been one of Adkins’ main guys since NINJA: SHADOW OF A TEAR), and I have seen it said that the tactical combat is very realistic. It does seem pretty authentic to me, so if that’s what you seek in an action movie, consider this a high recommendation. Personally authenticity rarely if ever does it for me like a flying kick does.

If you read Seagalogy and my thoughts on Seagal shifting from the alley and bar brawls of the Golden Era to shooting rifles and blowing up helicopters in the Silver Era then you know my preference here. I also think the philosophies and codes of underground fighters and ninjas and shirt are just much more interesting than the job duties of cops and soldiers. But obviously many people do enjoy this type of movie, and it’s Adkins’ prerogative to play different types of roles.

And of course he performs this one admirably. At first I wondered what the point was of building a movie around him without martial arts and also making him play an American – I think, but could be wrong, that he and Maynard are trying to sound a little southern sometimes? – but it’s a physically demanding role and takes advantage of his charisma and grit to fill in a lightly sketched character in a situation where there’s not much room for an arc. So there are many actors who would’ve had the right accent but not been as good.

For me the strongest parts of the movie are actually not the action scenes, but some of the more dramatic ones – the NIGHT OF THE LIVING DEAD/ASSAULT ON PRECINCT 13 type siege stuff where everybody’s arguing about what they should do. For a while Shields wants to just hand over Mansur, not believing the story of his importance. Mansur seems very sincere about his innocence, but starts to reveal things he left out before.

There’s a very simple, but very effective villain in Jess Liaudin (“French bouncer,” STREETDANCE 2). He’s a retired MMA and kickboxing guy, though (like Adkins’ martial arts) that doesn’t really come into play that much in his role as the terrorist leader Hakim Charef, a burly, bearded beast with a menacing charisma. In his most memorable scene he hectors a terrified detainee into putting on a suicide vest, getting the others to cheer for him and pump him up, giving him manly pounds and telling him “you’re one of us” and “there’s nothing to fear” like some combination football coach and cult leader.

I really like these sections where we leave Harris to follow the attackers, or Mansur in a stretch where he sneaks off on his own, and the one shot format gives it a different feel than if it was just an edit. It’s like the camera is telling us, “Okay, now while that’s going on follow me, I want to show you what’s going on over here.” And then when they get to the same part of the building where Harris is holed up and it switches back to his perspective we have a better understanding of the geography.

This is a well done siege movie, in my opinion more artful and thrilling than the surprisingly similar-in-plot JARHEAD 3: THE SIEGE, starring Adkins and directed by DTV luminary William Kaufman. So unless we’re counting ZERO DARK THIRTY and/or SPECIAL FORCES, that makes it Adkins’ best military movie, for whatever that’s worth. But I promised myself last year when I wrote about THE OLD GUARD that if I was gonna continue to review these War On Terror action movies I was gonna have to at least briefly address the politics rather than remain complacent about what I think has become an unintentional form of militaristic indoctrination in my favorite genre.

This one is not made by Americans and does not feel jingoistic at all. It does not ask us to be comfortable with the savage and inhumane conditions of the black site, and does seem to agree with Zoe’s contention that torture is an ineffective form of interrogation (though not one of the otherwise heroic characters has a moral objection to it). Also some of the detainees who get freed during the siege seem to be innocent people and it doesn’t ignore that it’s tragic when they get killed, including by Americans.

However (SPOILER) this also presents a world that seems to justify the endless wars and human rights abuses. The guy who claims innocence, who seems to have been unjustly accused due to anti-Muslim hysteria, really is planning an attack that could be worse than 9-11. I appreciate, and have to acknowledge, that he’s said to have been radicalized by an American drone strike, that the reason for the war was caused by the war, that it’s a snake eating its tail, and that the inconclusive ending intentionally leaves open the hope that he’s able to relent and stop the attack. But making us believe that perfectly nice seeming Muslims secretly plan to murder us, for whatever motive, is how you keep these wars going forever.

At the beginning the soldiers cynically lament that “the new guy” in the White House is shutting down this last torture factory to focus on preventing domestic terrorism, which I’m not sure they believe is a real thing. No matter when this was written and filmed, it was knowingly released at a time when it would be interpreted as referring to Biden and the end of the war in Afghanistan. So it ends up fueling the myth that Democratic administrations are ever able/willing to eliminate this type of militarism (man, don’t we wish) while also promoting the world view that we’re in grave danger of foreign attack if we don’t pump even more money and lives into it.

So please add my objections to the record, but ONE SHOT is a strong movie of its type and I recommend it with those caveats. Now excuse me while I go look for some more action movies where the hero isn’t a cop or a soldier and is given at least a few opportunities to jump really high or do a flip.

Ashley Greene James Nunn Jess Liaudin long takes Ryan Phillippe Scott Adkins siege movies Terence Maynard Tim Man Waleed Elgadi War on Terror
This entry was posted on Monday, November 8th, 2021 at 7:18 am and is filed under Action, Reviews, War. You can follow any responses to this entry through the RSS 2.0 feed. You can skip to the end and leave a response. Pinging is currently not allowed.