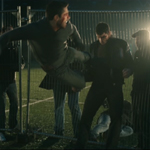 You guys know I got a soft spot for the unlikely DTV franchise. Back in the day I loved to review ’em for The Ain’t It Cool News. Sequels to WILD THINGS, CRUEL INTENTIONS, ROAD HOUSE, THE HOLLOW MAN… movies that really had no business getting sequelized, it made no sense, but there they were on the video store racks. Or now on the VOD menu or something. Of course, very few thrive in this medium. UNDISPUTED is a rare exception, and since it was originally about boxing it wasn’t that much of a stretch to turn it into this generation’s BLOODSPORT. Most of these sequels are not high quality like that, they’re mildly amusing at best, so I should probly stop wishing for those DTV followups to GHOST DOG and REDBELT (starring Harry Lennix). They would probly lead to disappointment.

GREEN STREET HOOLIGANS is definitely a weird movie to make low budget action sequels to, so hat’s off to this series. They aren’t great but they’re better than average, and I appreciate the absurdity of where they’ve taken things at this point in the saga. Part 1 was supposed to be a hip but respectable drama about this subculture of feuding “football firms,” a world somewhere between violent street gangs and just, you know…

It’s blind patriotism for a sports team, it’s crazy. Part 2 was done as a prison film centering on a supporting character from part 1, and then it turns into an underdog sports competition movie, forcing the soccer trekkies to shut up and kick the fucking ball.

Of course, the Green Street Elite can have many members over many years so there are countless tales to tell of their adventures, they don’t all gotta have to do with Petey and Elijah Wood and the pilot guy that becomes the star in part 2. For example there could be a guy named Danny who, like the older brother in part 1, used to be the leader of the GSE but is trying to leave that life behind but has a younger brother named Joey who’s still in it and gets killed only that happens at the beginning instead of at the end and he has to return to the life in order to find out who’s responsible. And Danny could be played by Scott Adkins, forcing me to rent GREEN STREETs 1-2 after I ordered part 3 on Amazon UK. 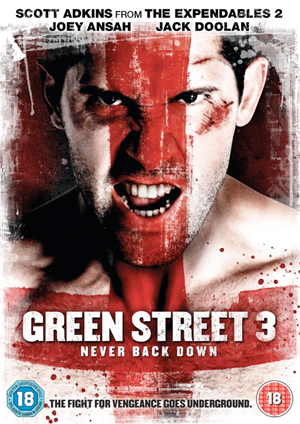 GREEN STREET 3: NEVER BACK down, not to be confused with NEVER BACK DOWN or NEVER BACK DOWN 2, mostly separates the firms from the sport of soccer. There are some early scenes of the new GSE in the stands during a game, but not much talk about how the season is going or anything like that. It seems like things have calmed down in the years since part 1, to the point that a character gets upset at Danny for smuggling a beer into the stadium. And when he starts a brawl everybody’s surprised and shocked. A stadium riot? Why, I never!

But they haven’t gone soft – in fact it’s the opposite. “There’s been an agreement. Keep it clean on the streets, and fight dirty underground.” The firms are peaceful in public, all disputes settled in organized underground combat, in “seasons” modeled after professional soccer. Fight Club meets fantasy football.

When Danny left the firm (on account of “it’s a mug’s game”) he left town and started a gym. He still likes soccer though because he watches it on TV by himself in a dark office, like a guy drinking alone. He trains fighters. He also trained his brother, supposedly a great fighter, although the guy (Billy Cook) doesn’t seem that great and, let’s remember, got beaten to death in competition. During the funeral reception at his mum (British for mom)’s house Danny slams the door in the face of Joey’s GSE homies, but later realizes he should buddy up with them, basically go undercover to find out who to send the revenge to. Joey’s schlubby friend Gilly (Jack Doolan) – we know they were really close because they kept hugging each other while watching soccer in the opening – relinquishes leadership of the firm to him in hopes of returning the GSE to the glory days of, I guess, part 1.

Danny turns into their coach, yelling at them, making them run and kick and shit in several training montages. It’s kinda cool to see this drill instructor side of Adkins, since he usually seems like the world’s nicest action star (or a stoic Russian).

As in part 1 it’s clear that the main activity for these firm clubs is just sitting in pubs all day drinking beer. For them it’s so religious the pub has to be called The Abbey. When they start doing all the training montages I wondered if the beer was gonna counteract all the workouts. But they acknowledge the contradiction in a scene where Danny makes the boys order only orange juice. After that though they’re back on the beer again.

The Abbey is so central to their lives that he falls in love with and starts fucking the sole bartender and owner (Kacey Barnfield, I SPIT ON YOUR GRAVE 2), who even lives upstairs above the bar. They had to invent a fantasy girl like that in order to get a woman into one of these movies other than Elijah Wood’s weepy sister or the ballbusting corrupt prison guard.

Elijah Wood in the first one had a secret life as a journalism sympathizer, Danny’s skeleton in the closet is that his best friend Victor (Joey Ansah) is an ex-hooligan turned police detective, and he meets with him sometimes to give him a heads up on what he’s finding out. I like how early on they show Victor doing a roundhouse kick to prove to Danny he can still do it, and to the audience that he’s gonna get to do martial arts at the end.

The fighting is decent. Not Isaac Florentine movie good, but easily the best of the trilogy. Action filmatism is not too shaky or choppy and with lots of slow motion and pretty long takes to really show the choreography. There’s a funny scene where Danny causes an old fashioned street rumble, depicted in pretentious slo-mo/opera soundtrack style, and into the mayhem runs the undisputed ninja himself doing fancy sidekicks on these yahoos. On a behind-the-scenes featurette he calls his character a “super hooligan,” though “the world’s most complete hooligan” would also work. Later in the organized fights it’s mentioned that “proper fighters” have taken over the firms, allowing for others to possess martial arts skills and be a challenge for him. Unfortunately the filmatists and choreographers show some restraint and keep the fighting fairly grounded, not “flashy” as Adkins describes his usual approach on that featurette. But I want my Scott Adkins movies flashy and I want my soccer hooligan underground fighting tournament DTV sequels ludicrous, thank you very much. Missed opportunity there. He does a few flying kicks, but he doesn’t get to do his trademark doing-the-splits-in-mid-air-and-kicking-two-different-guys-in-the-head-at-the-same-time-move.

A note about the packaging: the front cover credits him as “SCOTT ADKINS FROM THE EXPENDABLES 2.” I guess whatever works but that seems a little unfair for a guy that’s had around 8 star vehicles, many of them better movies than that one where he’s just a henchman. They kinda make him look like an idiot too, scowling on the cover. And look at that cover there, then scroll up a little to the video of Ogre. They have the same expression. Danny doesn’t like NERRRRDDDDDS!!! either.

Inside there’s this promo magazine thing called “Opening Credits” that comes in the UK Lionsgate DVDs, and in the write-up for GREEN STREET 3 it says that Danny left the GSE 14 years ago. So that would put it at 6 years before the first GREEN STREET came out but I’m not sure when it happens in relation to Petey’s older brother who also was leader and also quit at some point in the past. Maybe there should be a chart.

The blurb also says “directed by James Nunn (Tower Block, Cockneys vs. Zombies).” That second one surprised me but I looked it up and he was actually assistant director on that one, which is not the same thing. He did do TOWER BLOCK though which I know had a certain amount of buzz from playing Fantastic Fest and stuff, so it’s interesting that he spun that into doing a DTV sequel and not a more respectable gig. And I respect that.

I enjoyed the movie, but it’s a mild let down because the opening implies a more powerfully badass picture than it ends up being. We first see him at his gym where two big mob enforcer guys in leather jackets come to accost him – he beats them both to the ground and sends them back to their boss with a threat. This doesn’t even have anything to do with the story, it’s just telling us he’s not a guy to fuck with.

Like DRIVE and the MANIAC remake it has a very ’80s inspired keyboard score. This one’s by “Bob & Barn” and, this may be faint praise, but it’s maybe the best soundtrack I’ve heard on a DTV sequel. It works especially well in the low-on-dialogue early scenes where he gets the call about his brother and goes to see his mother. The tone of that music, along with the establishment of Danny’s fighting skills and the mostly-visual storytelling about the situation really got me set for a single-minded drive for vengeance. But this is a movie with alot of hanging out and stuff in it too. He’s not exactly Parker.

When the movie lightens up there is still a retro feel to the music. The music during the training montages, for example, is very late ’80s/early ’90s appropriate, but sincere. I’m sorry to report that it doesn’t have Survivor-style inspirational vocals. But sometimes the music reminds me of TOP GUN. That’s a good thing, right?

Adkins has built up a hell of a body of work already, and of course this is not gonna be one of the top ones like UNDISPUTED III and UNIVERSAL SOLDIER: DAY OF RECKONING, but it’s a pretty solid one that leans a little more on his acting than usual and is different enough to be interesting.

If I could make one suggestion though if there is a part 4 could they be kicking explosive soccer balls at each other, that would be pretty cool in my opinion. They don’t explode if you kick or head them but if your hands touch them without goalie gloves it’s game over. Robert Joy knows what I’m talkin about:

Billy Cook DTV DTV sequel fighting tournament Jack Doolan James Nunn Scott Adkins soccer underground fighting
This entry was posted on Monday, December 9th, 2013 at 2:03 am and is filed under Action, Reviews. You can follow any responses to this entry through the RSS 2.0 feed. You can skip to the end and leave a response. Pinging is currently not allowed.

11 Responses to “Green Street 3: Never Back Down”