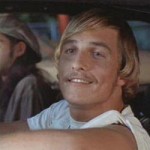 Yeah, this is a movie with computer animated dragons, and a bunch of people fighting them. But the emphasis of the story is not on the fighting. It’s always on the drama. After a prologue and a MAD MAX-like dragons-take-over-the-world explanation montage, you get basically a DAY OF THE DEAD setup. Here is this community of survivors living in spruced up castle ruins using what limited resources they can find to survive. You find out about their whole system – how they eat, their security system, how they use birds for lookout and what they teach their kids to do if they see a dragon. There’s also a little I AM LEGEND in there because they treat the dragons scientifically. They are not magical. They explain how they breathe fire, how they reproduce, the best way to kill them. 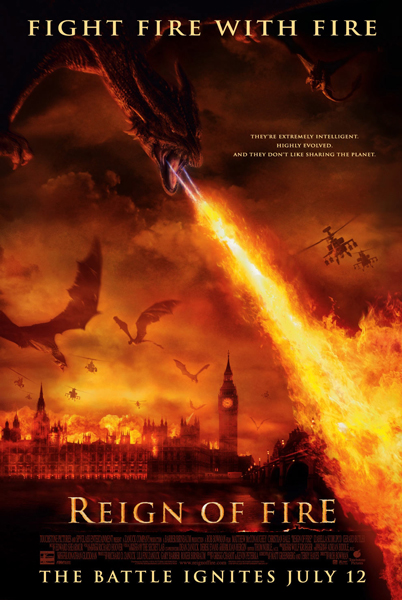 And after the dragons attack the place, you get a long scene of all the kids crying and walking around in shock. They are seriously traumatized. You don’t get that in ARMAGEDDON or INDEPENDENCE DAY or that other one with the giant iguana and Mathew Broderick. Not the one with Marlon Brando, that’s a different one. Anyway in most of these types of movies people run from special effects and they make a funny face and go “OH SHIT!” and if they’re Will Smith or Orlando Jones, they make some joke about being black. Like, “Man, why the black dude always gotta get eaten by the dragon first!” And then they keep going.

REIGN OF FIRE doesn’t have oneliners, it doesn’t have much comedy relief or action stunts or wacky ethnic stereotypes. There is not even a scene where animals narrowly escape harm. It’s a legitimate attempt to treat one of these types of premises somewhat realistically, like how it might really be. It’s a PG-13 movie but it doesn’t feel toned down for the kids. You don’t feel like they pussied out anywhere.

The two leads are Christian Bale and Mathew McConaghey, and both are topnotch. Alot of individuals give McConaghey shit because Joel Schumacher made him a big star with that horrible John Grisham movie, and he was in the worst Texas Chainsaw sequel, and he got arrested for playing the bongos naked. And now that I list those things I mean I guess maybe I can see their point. But I actually kind of like the guy when he’s in the right role. Like NEWTON BOYS wasn’t bad. FRAILTY was okay. And there was probaly something else.

Here he’s bald, bearded, covered in tattoos, playing the dragon-apocalypse version of Patton. A cocky american military asshole who chomps on cigars and has actually killed some dragons. He leads a small brigade of sophisticated dragon killers. He gets to say things like “Let’s rock ‘n roll, we got a dragon to kill” and they get to say things like “We got a bogie on our tail” (with the bogie bein a dragon). McConaghey gets to talk tough and act crazy, and walk around with no shirt on swingin an ax. Unlike in that embarassing ‘SAW sequel it works when he hams it up this time.

Christian Bale is the more passive, shaggy haired leader of the community, and the first modern man to see one of these dragons (when he was just a boy). He talks with his actual british accent and no matter how hard I stare at the guy, I can barely tell he’s the same genius who played AMERICAN PSYCHO so perfectly a couple years ago, or the racist fuckwad in SHAFT 2000. He’s good though.

I’m not gonna claim the movie is devoid of hollywood contrivance type deals. I mean why would Christian Bale have a 20 year old Time Magazine about the attack of the dragons sitting on his desk? But at least it wasn’t underwater, like when they did the same thing in WATERWORLD. And at least the pictures looked cool, like real news pictures, except with dragons in them.

If I was going to name the perfect summer movie it would be BLADE II, because I would watch that in any season. But REIGN OF FIRE is a good one and I would love to see more pictures like this. Pictures with unpretentious action premises that are still true to themselves, that don’t try to follow the trends or formulas that everyone else does, or treat the audience like a bunch of retards.

Christian Bale Gerard Butler Matthew McConaughey Rob Bowman
This entry was posted on Friday, July 12th, 2002 at 9:55 am and is filed under Action, Fantasy/Swords, Reviews, Science Fiction and Space Shit. You can follow any responses to this entry through the RSS 2.0 feed. You can skip to the end and leave a response. Pinging is currently not allowed.

One Response to “Reign of Fire”