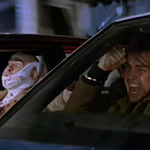 But it doesn’t go as dark as it could, and it has an enjoyably chaotic spirit to it, a world that pretends to be pretty down to earth and then leaps into absurd sci-fi concepts. I like these movies where there’s absolute insanity lurking around in your peripheral vision that you just don’t notice until it comes for you.

Jeff Fahey (SILVERADO, PSYCHO III, WHITE HUNTER BLACK HEART) stars as Bill Chrushank, a psychologist who works in prisons. Nice to see him using those big blue eyes for good for once. He’s playing a nice guy who starts having dark impulses, but it’s not the gradual descent into madness they would usually hire Fahey for. As soon as he snaps and hits his kid it cuts to him moving out of the house to a hotel to protect his family from himself.

The source of his problems, at least according to his theory, is his god damn right arm. He lost the original one in a car accident, but one Dr. Agatha Webb (Lindsay Duncan, THE REFLECTING SKIN) convinced his wife Karen (Kim Delaney, THE DELTA FORCE) to allow an experimental transplant, and he woke up with one arm looking different. Everything seems fine for a while, but then he starts getting the ol’ quick-flashes-of-murders-that-it-seems-like-he’s-committing, and sometimes his arm seems to do little things he’s not controlling.

At work, Bill has been examining this serial killer (Paul Ben-Victor, ASSAULT OF THE KILLER BIMBOS), struggling with the irony that if he can prove the guy has some kind of a conscience, and is therefore redeemable, that he’ll be declared sane and eligible for execution. Anyway, the new arm scares the shit out of this prisoner. Oh, weird – never noticed that tattoo that they only give people on death row. Huh.

He starts noticing more weird shit, it’s making him feel like he’s gonna kill people, he even goes to Dr. Webb and tries to get her to remove the arm. “Just give me a hook or something!”

In the days of VHS rental I know I rented this, but can’t really remember what I thought of it at the time, so apparently it was unmemorable. I think I might’ve been bothered by the premise that if you had the arm of a murderer then the arm would want to kill people. I mean, of course it’s ridiculous, but as a middle aged man I have the wisdom not to take it literally. What I love now is the outrageousness of Bill getting himself fingerprinted, learning that the arm comes from serial killer Charley Fletcher (John Walsh, also in SCANNERS II: THE NEW ORDER and FX2 that summer), doing the detective work to track down the guys who received the other limbs, and getting them to go have a drink together. Haven’t seen that in a movie before.

The left arm went to a painter named Remo (Brad Dourif, three CHILD’S PLAYs in at that point), who of course is very happy about his new series of paintings that Bill recognizes as based on the murders from his visions. But a cool thing is that Dourif is even more going against type than Fahey – he doesn’t really believe there’s anything wrong here, but is nice and understanding to Bill and even makes him laugh a little.

This basketball player Mark (Peter Murnik, DISTURBED) got the legs, and he’s a younger guy with kind of a yes sir, no ma’am ex-military/boy scout kind of demeanor that’s a good contrast to these two weirdo character actors. Bill finds him, follows him, and approaches him after witnessing an incident where he loses control of his legs while driving. Walks right up to his car and introduces himself as a guy who got an arm from the same dead person. Mark takes that weirdness surprisingly well, but still tells him to forget about it, it’s not a big deal.

Mark and Remo keep trying to convince Bill of that. When they witness him flipping out at a guy harassing him in the bar I think they figure he’s just driving himself crazy. And I felt like I kinda knew where this story was going, except I totally didn’t. From here it goes through two more levels of crazytown. (CRAZINESS SPOILERS.) One, it turns out Charley Fletcher is still alive, his head transplanted onto a new body, but he’s pretty pissed about his limbs being given away, so he’s going around with a big neck brace on, trying to reclaim them. Two, Dr. Webb is helping him because she’s gone full mad scientist and has a lab full of body parts.

There are plenty of gruesome and surreal touches to make the early sections special. The car accident scene is terrifying, and the surgery is really nasty and surreal because he’s awake part of the time and he doesn’t realize why at the time but there’s a row of guys in scrubs holding shotguns. In the bar fight Mark does a kick and you think, “Ah! Charley could kick!”

But it still feels pretty close to the normal thriller you would expect from this high concept, making it real hoot when the last act suddenly puts the mayhem pedal to the metal. You got Brad Dourif getting his arm torn off, his body dropped out a window onto a cop car. You got Bill in a cop car with a detective (James Kidnie, GATE 2: THE TRESPASSERS) when suddenly Charley drives up and handcuffs himself to Bill and the two cars drive around fighting over whether or not his arm is gonna get ripped off. There’s an insane car spin stunt and then you see that Charley has Remo’s severed arm on the dashboard and Mark’s legs in the back. And then, I am so happy to report, there’s a shot of him carrying all those limbs as the car explodes behind him. Classic.

Red is credited with the script alongside Norman Snider (DEAD RINGERS), screen story by Patricia Herskovic (producer of TOY SOLDIERS) & Joyce Taylor (presumably not the veteran KING-5 News anchor), based on the novel Choice Cuts by Pierre Boileau & Thomas Narcejac (VERTIGO, DIABOLIQUE, EYES WITHOUT A FACE). Man, the poster should’ve said “FROM THE CREATORS OF VERTIGO AND BLUE STEEL.” According to a Fangoria cover story at the time, Red wrote the initial draft and brought in Snider to give it “a troubled psychological mood” and Larry Gross (48 HRS., STREETS OF FIRE), who is not credited, to “put in some great action scenes.”

BODY PARTS got mostly bad reviews and opened at #8, below even week 2 of terrible fucking MOBSTERS. It didn’t make back its budget in theaters, but I’m sure video was the main outlet for this kind of movie. In an unlucky coincidence for the marketing team, Jeffrey Dahmer was caught about a week and a half before the movie came out. I guess they stopped advertising in Milwaukee, where they figured nobody wanted to hear anything more about body parts.

30 years later there’s not really an association between the movie and those horrible murders, but there is something weirder and more direct. In 2000, Red was driving in West L.A. and rear-ended a car at a traffic light. When the other driver got out, Red rammed his car again, drove into oncoming traffic, jumped a curb and crashed through a bus stop, some patio seating and into a bar. Then he got out and slashed his own throat with a shard of glass. Two people died in the incident and several others were injured. Red claimed that he had long suffered from a condition called syncope and had blacked out while driving, which did not seem to hold up to scrutiny in a civil trial. I think he had to pay a bunch of money, but criminal charges were never filed, and he’s been able to direct two more movies, in 2008 and 2015.

I bring this up not to pass judgment on Red or his movies, just to say that the dark obsessions of his work take on a different type of disturbing once you connect them to this tragic incident. In particular the scene where Mark cannot control his legs and they cause him to drive into traffic becomes very haunting. Whatever happened that day it seems at least coincidentally related to fears that had plagued him for years.

But that’s my only hesitation about this one. Red is a solid writer and director and I like the odd tone of his movies. This would actually make a good double feature with the even weirder car-horror movie HIGHWAYMEN, which is from HITCHER director Robert Harmon, but which Red had nothing to do with.

Last year Scream Factory released a special edition blu-ray of BODY PARTS, so luckily many people besides me already reconsidered or discovered it. And I’m glad, because it’s a good one. I couldn’t bring myself to listen to the commentary, though.

Brad Dourif Eric Red James Kidnie Jeff Fahey John Walsh Kim Delaney Lindsay Duncan Norman Snider Paul Ben-Victor Peter Murnik Pierre Boileau Summer of 1991 Thomas Narcejac
This entry was posted on Thursday, August 5th, 2021 at 12:03 pm and is filed under Horror, Reviews. You can follow any responses to this entry through the RSS 2.0 feed. You can skip to the end and leave a response. Pinging is currently not allowed.