THE HITCHER starts off as a really good horror movie. Atmospheric shots of C. Thomas Howell driving out on the highway, drinking coffee out of a Thermos, trying to stay awake. Looks like he’s been up all night driving. It starts to rain. Maybe out of desperation to stay awake, maybe out of spontaneity, he picks up a hitchhiker, Rutger Hauer. He jokes about how his mom told him never to pick up hitchhikers. But when he tries to ask Hauer where he’s going the weirdo keeps not answering, changing the subject. Every time he does it it gets more uncomfortable. Then he starts talking about murder and dismemberment, making threats, pulls out a switchblade. 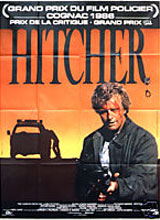 So it’s Howell vs. Hauer. Howell is in control of the car, but nothing else. You can understand why it’s not easy for him to make a move. He’s kind of a weiner, and Hauer is an intense guy. It just brings up all those feelings of being a young man, trying to be an adult but being afraid, not ready to handle everything yet. It was a big move for him to decide to move from Chicago to California by himself, he took the plunge and thought he could handle it but didn’t figure on this unstoppable psycho who may or may not really be named John Ryder.

I kind of thought it would be a confined-space threat, the two guys in the one car with constant driving threats, like SPEED. But actually he gets the psycho out of the car pretty quick. There’s a great moment of relief when he has shaken him out of his hair, will live, is a successful adult, can continue his trip relieved instead of in terror. He thinks. But Ryder has set his sights on him and keeps coming after him, and is supernaturally good at it. He’s successful enough in his stalking that I started to think maybe it was a PSYCHO deal where Ryder is this kid’s evil split personality or something.

Maybe the turning point though is when he gets arrested, interrogated, suspected of crimes he didn’t commit, wakes up and his cell is unlocked and all the cops are dead. I’m pretty sure he didn’t do that. And man, he’s fucked. What can you really do in a situation like that? I thought maybe I would go back in the cell and lock it and say shit, I was asleep, I don’t know what happened. But that’s not necessarily that much better than his plan of stealing a gun and running off into the desert.

I was a little iffy on Ryder’s abilities, it’s kinda ridiculous that he can kill all those cops and keep appearing wherever our weiner hero is. And to me it’s scarier if it seems like a real guy instead of some demon or x-man or something. Later on it turns into more of a straightup action movie as the cops are after Howell and Ryder starts killing the cops. There are great car stunts and a shot that literally made me say “How did they do that?” when it appeared that they crashed an actual helicopter.

This is a clever and well-directed movie that walks along the line between real and surreal, keeping you off balance and uncomfortable. But definitely its biggest strength is the performance by Hauer. He is so crazy and so pleased with himself and yet never goes over-the-top. His strangest moment is when he’s handcuffed and Howell spits on his face. He wipes it off but just sits there with a bit of a smile, like he’s happy about it, or proud of Howell or something.

By the way, do you guys think C. Thomas Howell could pass for a black guy? Not sure why that popped into my head.

The writer is Eric Red, who also wrote NEAR DARK but I guess is now best known for an unfortunate incident driving his car into a bar killing two people and then slashing his throat with a piece of glass (he survived and still makes movies). (and by the way I never knew about that until you guys mentioned it in my comments recently) I think this one is really well directed, but Robert Harmon didn’t do too many well known movies after this. He did do Van Damme’s NOWHERE TO RUN, the JESSE STONE movies with Tom Selleck and that Jim Caviezel movie HIGHWAYMEN which I plan to check out due to the HITCHER-esque subject matter.

I wonder about that remake too, did they make it a period piece? Hitchhiking is one of those things you can’t really hinge a modern movie on. It’s like how cell phones ruin everything in movies now, they always have to come up with the reason why the character doesn’t just use their cell phone to get help. In this case, kids wouldn’t understand why the hell C. Thomas stopped and let a stranger into his car. And they’re right. It’s not the same as other dying traditions like trick or treating or scary movies where you just shake your head in disappointment at today’s sissy, sheltered little kids. No, that’s one thing the new generation got right: you shouldn’t pick up Rutger Hauer. Let him get a cab. Shoulda listened to your mama, Howell.

Eric Red Jennifer Jason Leigh Rutger Hauer
This entry was posted on Sunday, August 16th, 2009 at 1:21 am and is filed under Action, Horror, Reviews, Thriller. You can follow any responses to this entry through the RSS 2.0 feed. You can skip to the end and leave a response. Pinging is currently not allowed.

76 Responses to “The Hitcher”