Okay, you were right, STREETS OF FIRE is pretty cool. I was a little skeptical because the poster calls it “A Rock & Roll Fable,” which is not really one of my top kinds of fables. I’m more of a free jazz fable type of guy, I like SPACE IS THE PLACE. Also I got some prejudices against the ’80s rock and the retro ’50s style fetishes. Luckily the singer gets kidnapped for most of the movie, so the long onstage performances are only at the beginning and end. It’s not a rock musical or anything. 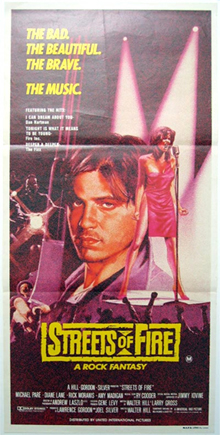 The movie is by Mr. Walter Hill, and I’m pretty sure nobody else would be able to make a movie like this, or would think of it, or would want to. (except our friend Albert Pyun, who I guess is doing some kind of an unofficial sequel). Willem Dafoe plays Raven, who seems like his character from THE LOVELESS sucked into another dimension where he gets power mad because can lead a huge biker club that gets away with running around taking shit like a bunch of vikings. I think somebody said this movie takes place in the same world as THE WARRIORS but three decades earlier. Or wait, maybe it was this is what’s going on on earth during ALIEN. No, I think it was the WARRIORS thing. Leather-jacket-wearing-gangs, corrupt cops and rock-n-roll groups seem to rule the city. Ellen Aim (Diane Lane) and the Attackers (some guy dressed like David Bowie, others) are performing when Raven’s boys storm in and kidnap Ellen.

So Ellen’s ex-boyfriend Tom Cody (Michael Paré), freshly returned from “The War,” comes into town and offers his asskicking services to her new boyfriend, record mogul Billy Fish (Rick Moranis). You know this is a hard boiled world when even Rick Moranis tries to talk tough all the time. But he agrees to pay Cody and goes along on the mission, as does McCoy (Amy Madigan), a female war vet Cody met at a bar. She says he’s not her type, if you know what she means. If you don’t know what she means let’s just say that if she had to be in a gang from THE WARRIORS I bet she’d choose The Lizzies. Or if she was in space she’d hang out with Vasquez.

So it starts to seem a little bit like THE WIZARD OF OZ, they keep picking up new friends along the road. When they need new wheels they hijack a bus from The Sorels, a struggling vocal group made up of Stoney Jackson, Grand L. Bush, Robert Townsend and Mykelti Williamson. In probly the best scene of the movie the Sorels sing a doo wop song for everybody in a break from battling. I think it’s the only time McCoy laughs.

The Sorels are really understanding about the hijacking, so I don’t think it’s cool what position they get put in. When they get stopped at a roadblock and have to pay off the cops to get through McCoy pretends to be the driver for the Sorels, mentioning the name of the group a couple times. Then Cody pulls guns on the cops, they make them lay down in the street and they blow up their patrol cars. Do you remember how much trouble Ice-T got in just for singing “Cop Killer”? I don’t think it’s fair for the poor Sorels, especially in this ’50s-ish era, to get mixed up in that.

Then, as if that’s not bad enough, Cody immediately announces that they gotta ditch the bus. I was relieved at the end when the Sorels seemed to benefit from their connection to Ellen (commercially if not artistically – they end up supposedly singing the recognizable ’80s pop song “I Can Dream About You” [not a cover, I guess it comes from this movie].) But it was still shitty to do all that to random doo-woppers.

Like THE WARRIORS it’s the atmosphere and the tone that really make the movie. Without being futuristic this city almost reminds me of BLADE RUNNER, it’s so moody and oppressive. The streets really do got alot of fire on them, not just the patrol cars but also he takes pot-shots at motorcycles causing them to explode, and there seems to just be random burning debris on the sides of various roads, the aftermath of some earlier mayhem our protagonists had nothing to do with. And there are great shots of big neon signs reflecting on wet concrete.

Maybe the movie is best summed up by what happens between Tom Cody and Ellen Aim. It’s obvious that he still has a thing for her, but they act like they hate each other. In fact, she tells him she hates him for taking money to rescue her. If he really loved her it would be pro bono mercenary work, obviously. But he actually doesn’t take the money, only collects McCoy’s share. So they approach each other in the rain and without saying anything to each other they kiss passionately like the cover of a romance novel and the next thing you know they’re in a bed somewhere fucking Rock & Roll Fable style. It’s so pulpy and macho and I like how everybody’s always running their mouths off but these two never talk openly about their animal magnetism or whatever it is. It doesn’t really need to be said that she’s gonna leave Rick Moranis for this tough guy who left her behind before. Or at least she’s gonna try.

I’m sure in this post-war period there were alot of guys like Tom Cody coming back kind of messed up, not able to talk about their feelings, and not able to work things out with their soulmates. So what you get is you end up with somebody like Ellen Aim probly marrying somebody like Billy Fish and dreaming of somebody like Tom Cody and they’re in this empty marriage and then they have kids and the family breaks apart because they’re not really in love and they’re addicted to rock ‘n roll so the kids are neglected and grow up running around in the streets playing in the fiery debris. And when those kids get older do you think they’re gonna go out and get an education and get a respectable job, or do you think they’re gonna join the Baseball Furies?

Wait a minute, wasn’t Billy Fish that serial killer that put pins in his balls? If so there is more going on in this thing than I realized while watching it. Also, if this is a fable then where are the talking animals and the moral at the end? And why didn’t somebody try to go up into space to help Ripley? I guess I still got a few questions about this one, hopefully Pyun will clear some of these up in his movie.

Amy Madigan Diane Lane Michael Pare Rick Moranis Walter Hill Willem Dafoe
This entry was posted on Wednesday, September 22nd, 2010 at 1:11 am and is filed under Action, Music, Reviews. You can follow any responses to this entry through the RSS 2.0 feed. You can skip to the end and leave a response. Pinging is currently not allowed.

68 Responses to “Streets of Fire”