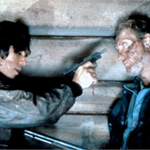 It’s not supernatural, and maybe not even horror, but the mood somehow does remind me of NEAR DARK. Lou Diamond Phillips (RENEGADES) plays Jack (last name Ketchum, apparently!), who’s introduced in his car, drifting to the next town after – as he explains in voiceover narration – falling for a sheriff’s daughter. Too dangerous. But before he can find a new place to stay he drives his truck off the road into a forest and wakes up the captive of a paranoid old redneck named Lyle (Charles Dance, LAST ACTION HERO) and his timid wife Willie (Mia Sara, TIMECOP), who I assumed at first was his daughter. They live in an isolated home in some North Carolina woods that’s somewhere between a hermit’s shack and a luxury resort lodge. It looks cold and some of it is built out of rusty car doors, but it’s huge, with various buildings and facilities.

Once Lyle determines that Jack is not out to get him he starts treating him at least a little bit more like a guest. Not that there’s anything comfortable about sleeping fully dressed (including shoes) on a bed with no mattress. And instead of saying “The rain is coming down too hard for you to leave safely, but you’re welcome to stay until it clears up,” Lyle communicates the same thing by waking Jack up with a gun pointed at his head, making him look out the window and asking him what he sees. 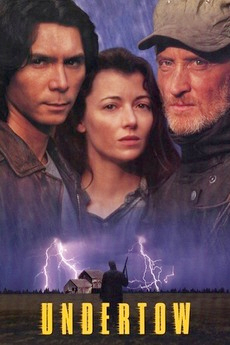 This is a house where they literally batten down the hatches. Other than some stock footage lightning strikes the atmosphere of this gloomy glorified shed being hammered by the storm is strong, even on 4:3 VHS. Lots of roaring wind, dripping water, creaking and slamming.

A favorite scene is when the two let their guard down slightly in Lyle’s weapon room. It’s like a huge garage with big ass rifles and bows and traps and shit hanging everywhere. Jack tosses Lyle a little shit about why anybody would need that many guns. What are you planning to need those for? I wondered for a second if there was gonna turn out to be a monster in the woods he was preparing for. Nah, he’s just a regular American citizen who feels most relaxed when he has the capability to blow fatal holes through the flesh and bone of hundreds of human beings. Let the man feel comfortable!

They have a macho bonding moment/dick measuring contest when Lyle decides to demonstrate (indoors) a crossbow, firing a HARD TARGET style bladed arrow that punches all the way through a wooden post. Red creates great tension and a sense of the power of the weapon as Lyle pressures Jack into trying it himself. He has to hook his fit into it to stretch it out, pull hard to get the string across, and he stupidly aims it right at the closed door that we got a pretty fuckin good idea, having seen movies before, that Willie is about to walk through.

There are also plenty of bear traps around. You feel pretty confident somebody is gonna get bear trapped. Probly not a bear, either. And it’s revealed that Lyle has a gigantic moonshining facility which is unstable and could explode. Maybe that’s the reason for his paranoia, but how illegal is moonshine after prohibition? I don’t know. But he’s making more than he’s gonna need for what we see him using it for, which is just making Jack taste how gross it is so then he can drink it casually himself as proof of his male power and vigor.

Some of it is about the two trying to sneak kisses or a shower together when Lyle isn’t around. It’s played more for scares than for sexiness. Even before Willie gets in the middle it’s this cold war of masculinity, Lyle trying to show he’s more manly and capable than this young hotshot, Jack trying to prove him wrong. Also there’s just the suspense thriller aspect of him being stuck there. When Lyle gets a call on the ham radio that the hurricane is headed his way and he needs to evacuate, he not only refuses but smashes the radio so Jack won’t tell the rescue crews to come. Lyle threatens to kill him if he touches the radio, and he seems sincere.

I got a good laugh from Phillips’ comic timing and physical performance when in the middle of an argument he decides “fuck it” and abruptly walks right out the door into the storm, like he’s gonna walk out of there. He makes it maybe 15 or 20 feet before he’s slipped and been knocked and blown around enough by the wind and rain to realize it’s impossible to get anywhere, and then he has to fight his way back to the door. I could absolutely see myself being stubborn enough to try that, so I get it. I feel him on that one.

Lyle owns a gigantic truck which he has Jack drive in a SORCERER-like struggle up a small mud hill. Then he uses it to pin Lyle against a log (without crushing him). It’s a weird thing to do, but of course vehicular violence is a factor in most Red movies.

Jack is no hero. He falls into the same trap he was driving away from in the opening scene, having obvious designs on this woman married to a psycho. Yes, she’s in an abusive situation, but he ignores her hesitations and protests, taking her attraction to him as license to decide what she’ll do with her life. And after a horrifying scene where he has little choice but to sit in his room listening to Lyle raping Willie through the gaps in the floorboards – he does push ups while trying to ignore it – has rough sex with her in a scene that seems to leave it deliberately ambiguous as to whether or not there’s consent.

Men suck in this movie, but there are only two of them. It’s a non-scientific study.

The entire cast of three are very good in their roles – Phillips reminds me why he was such an appealing leading man, Sara evokes great sympathy being stuck between the two and Dance is especially fun, his penetrating intelligence providing a menace even behind his sometimes iffy Southern accent.

I like the bleak tone and the odd simplicity of the premise. The movie’s not much, but it’s a solid, distinct little thing, and it’s kind of baffling to see what terrible reviews it got at the time. I guess it wasn’t what critics were looking for on the Red Shoe Diaries channel (other Showtime productions that year include THE HALFBACK OF NOTRE DAME, Andrew Stevens’ SUBLIMINAL SEDUCTION starring Ian Ziering, ROBIN OF LOCKSLEY starring Devon Sawa as contemporary teen Robin Hood, MIAMI HUSTLE starring Kathy Ireland, Mario & Melvin Van Peebles’ GANG IN BLUE, VAMPIRELLA, and [admittedly] the acclaimed BASTARD OUT OF CAROLINA.)

I liked it, but I’ve never gotten Showtime, so it’s not up to me.

Charles Dance crossbow Eric Red hurricane Kathryn Bigelow Lou Diamond Phillips made-for-cable-movies Mia Sara
This entry was posted on Tuesday, October 15th, 2019 at 12:37 pm and is filed under Reviews, Thriller. You can follow any responses to this entry through the RSS 2.0 feed. You can skip to the end and leave a response. Pinging is currently not allowed.