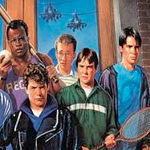 But when we meet our young protagonists jogging into The Regis School and spray painting it to say “The Rejects School”, Robert Folk (POLICE ACADEMY)’s score goes from sounding like a Chuck Norris movie to an episode of Amazing Stories or The Young Indiana Jones Chronicles. Oh, youth. They have self-owned themselves as rejects because they’re supposed to be the fuckup rich kids who got kicked out of every other prep school. Now they will endure the gauntlet of action-movie-scenario to prove their true worth.

Our heroes are the outrageous troublemaker Billy Tepper (Sean Astin, THE WILLIES), his sidekick Joey Trotta (Wil Wheaton, STAND BY ME) and their buddies Snuffy (Keith Coogan, THE FOX AND THE HOUND) and Hank (T.E. Russell, TRESPASS) and later Derek (Shawn Phelan). Yes, they are rich boarding school kids, but that doesn’t mean they don’t know how to par-tay. Billy has a racket going where he sells bottles of mint-infused vodka disguised as mouthwash. And he and the boys go down into the secret trap door room to play cards and hook a handset to a phone line to record Billy talking to a phone sex operator. You know how it is, a bunch of dudes like to sit in a room together hiding their boners as they listen to their friend talk to a fake lady pretending to be sexy. All boys do it, of course. 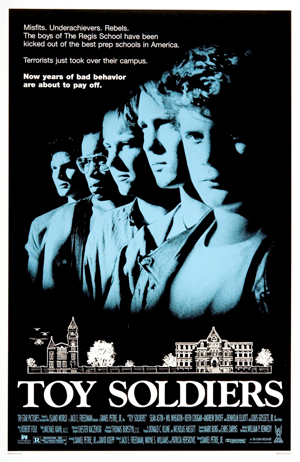 A word of caution: it is hard to watch this as an adult. They spend a good chunk of time pretending that we came here to see some cool bros playing pranks to rebel against The Man. And in this case The Man is the very wise, cool and forgiving Dean Parker (Louis Gossett Jr., THE PUNISHER) who has every reason to throw these little shits out on their asses except that he believes they can benefit from the school. I guess he’s supposed to be kind of a hard ass because he ruins their fun when he catches them bootlegging and phone sexing. But also his punishment for moving an entire office’s furniture onto the lawn is to make them move it back.

It’s almost a half-hour in by the time the Colombians storm in to set up bombs and guns. They catalog how many hostages they have but treat them like prisoners of war, letting them go back to their dorms to enjoy their Playboys or hang around outside like it’s the yard. It’s not exactly the honor system, though, because they promise to execute five people every time one person is missing. And they don’t splatter a guy’s brains on a window like Mr. Takagi in DIE HARD, but they rough some kids up. Billy shows his heroism by being the one guy out of a hundred that jumps in saying “Hey, don’t do that!” when they kneecap one of the other students (George Perez, CARNOSAUR).

On the outside the military, including a general (R. Lee Ermey, ON DEADLY GROUND), camp out with Dean Parker, worrying about what trouble could happen because these boys “have a real problem with authority.” And sure enough they’re planning a revolt. From what I’d heard I expected this to be in the DIE HARD mold. They have the same kind of shots of the hero climbing through vents, and there’s definitely a DIE HARD 2 vibe to the villains. But their response to the attack is more like THE GREAT ESCAPE or something. It’s about the kids coming up with elaborate plans where they have to work together, synchronizing watches and creating distractions at certain times and what not. Breaking a window with a soccer ball, faking an asthma attack.

They walk around the school trying to act inconspicuous while talking to different people about their particular knowledge and skills. Joey draws portraits of all of the terrorists in his notebook to deliver to the authorities. I assumed the Radio Shack phone and tape recorder that the dean made Billy smash in the phone sex scene would be used as part of their escape, but I guess that was just to establish that Billy knows about electronics. Later he and another kid have to come up with a scheme for dealing with the remote bomb detonator Cali wears around his wrist at all times.

They plan, play tricks, create distractions with a remote control plane, climb through vents and culverts. Billy gets to be action guy and man of honor because he makes the daring run off campus to deliver information to the army and then, when they don’t want to allow him to go back, steals one of their Humvees and leads them on a chase so he can get back to the school in time for the roll call. 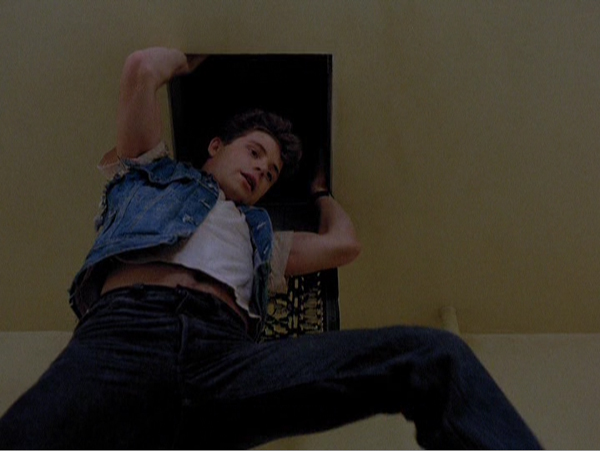 I didn’t know that Astin had ever tried to play a tough guy. He wears a stud earring, prefers muscle shirts and finds several times to display his hairy chest. He does many simple stunts like climbing up into or dropping down from ceiling vents. In one scene when he has to run into the cafeteria and yell for everyone to leave he chooses to add the unnecessary flourish of leaping on top of a table to do it.

He’s more convincing than Wheaton, who talks in some kind of Italian-American accent, wears a dangly cross earring and gets angsty about hating his dad (Jerry Orbach, OUT FOR JUSTICE), the biggest mobster in New Jersey. Joey is the hothead who convinces everyone to fight the terrorists, because “we could shred those fuckers” if we stole a machine gun, but he also wears tie-dyed peace sign and Bob Marley t-shirts.

By the way, posters in their shared dorm room include Bob Marley, Siouxsie and the Banshees, ROCKY HORROR, Guns ‘n Roses, Grace Jones, The Misfits, Power by Ice-T, and, the most 1991 reference of all, Boo Yaa Tribe. 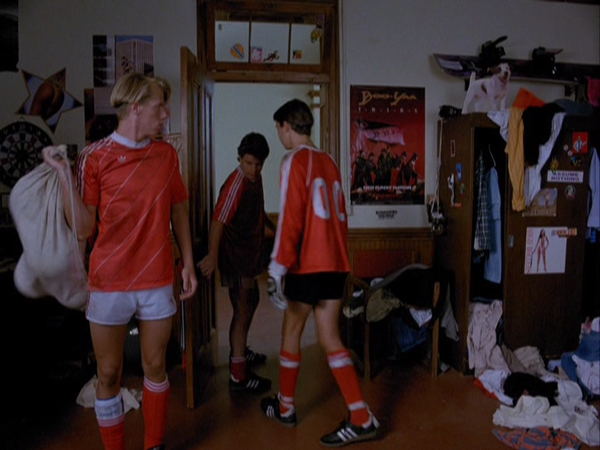 I wouldn’t be surprised if in some country this was called UNDERWEAR CLUB, because there are several scenes where the boys all stand around in their underwear while debating their response to being held hostage. They have all combinations: boxers with shirt, tighty whiteys with no shirt, colored briefs with button up shirt, etc. It’s weird. Boarding school thing, I guess. 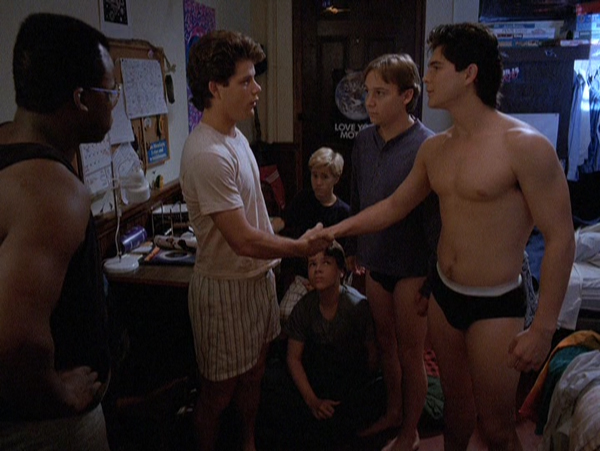 But it’s not timid about being a real action movie. Stuff blows up. Billy gets beaten and has slashes across his back. One main character dies horribly in front of his friends. There is a prison riot scene. But also there’s an ending where the survivors all hug and then punch each other and muss each other’s hair. And then probly they go look at Playboys together.

By the way, it’s edited by Michael Kahn. It’s not like it was before his success – he was already Spielberg’s guy going back to CLOSE ENCOUNTERS. This is two years before he did SCHINDLER’S LIST! My guess is they chose him because he did GOONIES. These are teen Goonies – underdog boys who stubbornly use their ingenuity and tunnel-crawling skills against a criminal conspiracy, along the way bonding and finding adventure with their bros. When Goonies are teens they take on Colombian drug gangs instead of dead pirates or whatever. And instead of riding bikes they talk about jerking off.

Director Daniel Petrie Jr. wrote BEVERLY HILLS COP and directed IN THE ARMY NOW. His father is the Daniel Petrie that directed SIX PACK and FORT APACHE THE BRONX. His brother Donald Petrie directed GRUMPY OLD MEN and MYSTIC PIZZA. David Koepp (I COME IN PEACE, JURASSIC PARK) originally adapted the novel by William P. Kennedy to be directed by John Schlesinger, before Petrie rewrote it to be his directorial debut.

Andrew Divoff Daniel Petrie Jr. David Koepp Denholm Elliott George Perez Jerry Orbach Keith Coogan Louis Gossett Jr. Michael Kahn R. Lee Ermey Robert Kraft Sean Astin Shawn Phelan T.E. Russell Wil Wheaton
This entry was posted on Thursday, December 8th, 2016 at 11:08 am and is filed under Action, Reviews. You can follow any responses to this entry through the RSS 2.0 feed. You can skip to the end and leave a response. Pinging is currently not allowed.