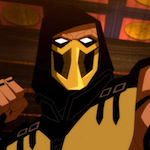 Although I kind of enjoy the silly PG-13 live action movies MORTAL KOMBAT and even MORTAL KOMBAT: ANNIHILATION, I appreciate that this cartoon is super-duper hard-as-fuck R strictly for violence. No boobs, don’t remember the cursing, a few references to balls (because Sonya Blade repeatedly crunches Johnny Cage’s), but the rating is for tons and tons of bloody, reprehensible bodily deconstruction. Pretty frequent finishings and fatalities and flawless victories in this one.

There are basically two parallel stories going on until they meet up in the last act. The B plot is a variation on Paul W.S. Anderson’s first MORTAL KOMBAT picture: the thunder god Raiden (Dave B. Mitchell, HIGHLANDER: THE SEARCH FOR VENGEANCE and like 200 video games) recruits arrogant superstar Johnny Cage (Joel McHale, Almost Live!, DELIVER US FROM EVIL), vengeful special ops soldier Sonya Blade (Jennifer Carpenter, BATTLE IN SEATTLE, BRAWL IN CELL BLOCK 99) and old timey martial arts warrior Liu Kang (Jordan Rodrigues, BRING IT ON: WORLDWIDE #CHEERSMACK, LADY BIRD) to take a boat to a magic island and represent “Earthrealm” (fancy talk for earth) in the once-in-a-generation fighting tournament that they can’t let evil Outworld win for the tenth time in a row or they’ll consume our realm and it will be a difficult adjustment for many of us. 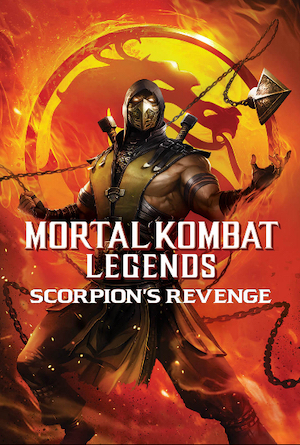 Fortunately Liu Kang is less of a main character this time, because he’s exponentially more bland than the already sort of milquetoast character in the movie. But he does kind of a monkey version of Bruce Lee’s fighting sounds and, in by far his best character moment, punches a guy’s head off and catches it on his foot like a soccer ball and juggles it. Johnny (world famous star of movies like ASS KICK and NINJA MIME) is basically one unfunny running gag about thinking this is all a movie, while the others complain about what an idiot he is and Raiden claims nobody should tell him because “his journey is one of discovery.” Sonya is cool, though, getting to absolutely demolish a guy’s head in an introductory street fight and spout some good one-liners in her search to avenge the cyborg (I guess?) Kano (Robin Atkin Downes, GARFIELD: A TALE OF TWO KITTIES additional voice cast, and about 400 video games and cartoons) and save her military fight brother mentor Jax (Ike Amadi, another prolific video game voice). Jax is as much of a cliche as other portrayals I’ve seen, but with the advantage that he gets both arms ripped off by Goro (Kevin Michael Richardson, sole returning cast member from the live action movie) and sticks around for the rest of the movie without complaint.

Okay, there’s all that, but the other plot that we start out with and keep going back to is an origin story of Scorpion (Patrick Seitz, A TURTLE’S TALE 2: SAMMY’S ESCAPE FROM PARADISE). I’m sure more experienced kombatants are aware of mythology behind this character, but to me he was only the yellow-robed variation on blue-robed ice-power ninja Sub-Zero. He shoots tentacle claws out of his palms and says “GET OVER HERE!” And yet he was my favorite character. In the movie he looked the coolest, he had the best fight scene (in the woods against Johnny Cage) and I don’t know… I guess I appreciate his directness. “Get over here.” No further discussion required or desired.

Do we really want to see his backstory? I wasn’t sure at first. We meet him in his regular life as one Hanzo Hasashi, wearing the same clothes, but no mask, and with a pony tail. He has a wife and kid. Could be trouble. But it’s kind of a LONE WOLF AND CUB opening where ninjas from the blue-favoring Lin Kuei clan attack him and his son, and he introduces the film’s style of cartoon gore… 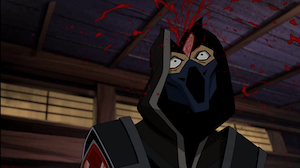 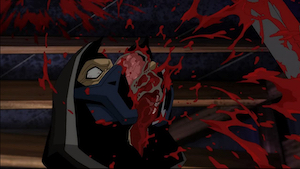 …chop-chop-chopping through motherfuckers, making cross-sections out of them, revealing slices of brain and meat and bone, stabbing into skulls, making eyeballs pop out like ping pong balls, spraying blood on his kid’s face. It’s all very kinetic and frequently zooms in to show x-rays of the interior damage, an adorably crass gimmick that comes from some editions of the game, but ultimately from Sonny Chiba in THE STREET FIGHTER. 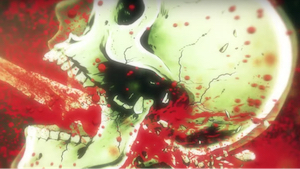 By the end of this scene he has killed so many guys on a bridge that their blood is cascading down the side and making red streaks in the waterfall, and he has literally pulverized a guy into a few chunks of meat on top of a mountain of intestines, but Sub-Zero (Steve Blum, PREHYSTERIA 3) still freezes him to make him watch the death of his son, then execute him with an icicle.

But, what, you thought merely ending the life of Scorpion would be enough to keep him down? Give me a break. He wakes up in Hell, looking like Samurai Jack with his hair down, hung from spiked chains with blades impaling his wrists and ankles, being tortured by a huge demon (Fred Tatasciore, voice of Baby Groot on the Disneyland GUARDIANS OF THE GALAXY ride, which should’ve been entirely scrapped if they couldn’t get Vin Diesel in my opinion). But he figures out a cool (and gory) way to escape, use the chains as weapons and fight an army of demons to confront the boss of the place, Quan Chi (Darin De Paul, TOP CAT BEGINS, SHAZAM!), who makes him a deal to enter the Mortal Kombat tournament and perform a task for him in exchange for the lives of himself and his family and the opportunity to face Sub-Zero and thaw him out. Throw some rock salt on him. Get a guy’s tongue stuck to him, maybe. Defrost the motherfucker.

Admittedly, the actual Mortal Kombat parts didn’t excite me as much as the Hell parts, especially when it gets away from the Scorpion story to the other guys, and especially especially when they stop the  violence for a bit to, like, sit by the fire and have a conversation about their lives. But there’s something so tall tale, so mythological, so Conan the Barbarian about this warrior who’s so tough he fights his way out of Hell, that I wasn’t gonna fall off. (Even before that they’d buttered me up with the goofy ass thing they do to the WB logo, which I won’t disclose.) But there are some twists and dramatic moments as the story comes together and (SPOILER) he shucks Goro’s skinless head and spine out of his body and we see inside his hollow face. So it’s a pretty good movie.

Nothing against the art form of animated drawings, but there’s something about seeing actual human bodies move that, to me, can’t be matched in this medium, and the music by John Jennings Boyd & Eric V. Hachikian (HOW HIGH 2) lacks the face-slapping swagger of the movie’s techno theme song and George S. Clinton guitars-and-primal-drums score. Nevertheless, the audacity and deranged imagination of the violence here, combined with the skilled animation of the martial arts, makes for a better take on this material.

Screenwriter Jeremy Adams has written various cartoons about Legos and Hot Wheels and and shit, plus the upcoming BATMAN: SOUL OF THE DRAGON. That takes place in the ’70s and stars the voices of Mark Dacascos and Michael Jai White, so let’s face it, I’ll watch it. Director Ethan Spaulding broke through on Avatar: The Last Airbender, the children’s cartoon tie-in to M. Night Shyamalan’s THE LAST AIRBENDER*. At WB he directed a bunch of Scooby-Doo and DC Comics DTV features, including one I’ve reviewed, BATMAN: ASSAULT ON ARKHAM, a fun Suicide Squad movie made two years before the live action one. 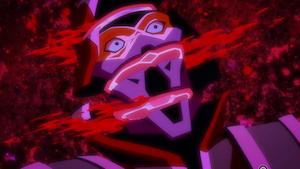 MORTAL KOMBAT LEGENDS: SCORPION’S REVENGE is a fun DTV movie – almost good enough for me to forgive their previous attempt at an animated home video tie-in – and I hope when the next live action incarnation finally GETS OVER HERE!!! it has some of this spirit of macho mythologizing and kreative mutilation. In fact, I hope it’s the first major movie released after the vaccine has made its way across society, and it will bring the entire world together as we sit in crowds wincing and cheering for dudes getting compound fractured and their heads hacked up like a ham sliced by a laser. Until then, everybody please stay safe at home watching this.

Ethan Spaulding Jennifer Carpenter Joel McHale Jordan Rodrigues video games
This entry was posted on Thursday, September 10th, 2020 at 10:29 am and is filed under Action, Cartoons and Shit, Fantasy/Swords, Reviews. You can follow any responses to this entry through the RSS 2.0 feed. You can skip to the end and leave a response. Pinging is currently not allowed.