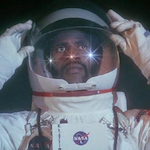 Because of that connection, and because it’s a 1972 movie dealing with the Black experience, with some guns and a soundtrack by J.J. Johnson, it is sometimes lumped in with Blaxploitation. It’s not that at all. Frankly I prefer movies where the exploitable elements are more prominent, but that’s obviously not what St. John was interested in, and that should be acknowledged. This is an arty, experimental and political work that reminds me much more of Jules Dassin’s UP TIGHT (co-written by Ruby Dee), Melvin Van Peebles’ SWEET SWEETBACK’S BAADASSSSS SONG and Bill Gunn’s GANJA & HESS than SHAFT or SUPER FLY. It’s more about an impressionistic depiction of societal sickness than, you know, traditional entertainment. For what that’s worth. 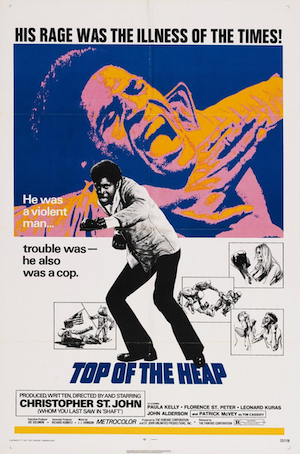 It opens with a bunch of white hippies protesting at the future site of a chemical plant, fighting angry construction workers and getting clubbed by riot cops, including our protagonist George Lattimer, played by St. John. For his trouble he gets a piss balloon in the face. In freeze frame and everything. It’s an introduction to the sorts of indignities his job will afford him while he tries to deny the hopelessness of a Black man in this career.

His wife Viola (Florence St. Peter, THE REIVERS) gives him shit as soon as he gets home, first for not doing his part talking to their 14 year old daughter Valerie (Almeria Quinn, FRIDAY FOSTER), who she caught having sex in the garage, then about him being passed over for sergeant again. He doesn’t want to admit he got screwed, because that would mean the system he bought into is a lie.

But you can see it bubbling in him. There’s the incident when he’s out of uniform on the bus and another Black passenger thinks the bus driver is being racist and looks to him for support. The guy decides to threaten the driver and George chases him off with a gun, at which point a white cop comes after him and doesn’t believe he’s a cop until he sees his badge. (This part is a little weird because by modern standards he seems lucky he didn’t get shot.)

Then there’s the taxi incident. A cabbie (Allen Garfield, THE CONVERSATION) yells racist shit at him in traffic, but immediately backs down and apologizes when he realizes he’s a cop. George is always going around in leather gloves and trenchcoat, sometimes with the uniform under it, revealing it like a secret weapon.

Oh, and what about when he busts two Black drug dealers (I believe one is Ji-Tu Cumbuka, who we saw in BREWSTER’S MILLIONS and VOLUNTEERS, or at least he’s credited as being in the movie somewhere) and they basically accuse him of being a race traitor. All of these stresses get to him and he continues to take them out on Black suspects while his presence on the force promotes the illusion that they’re equal opportunity.

His bitterness shows through in dry comments like calling the “couple o’ fat guys from the war department” they’re doing security detail for “Davy Crockett and the Lone Ranger.” Meanwhile – here’s where it starts getting weird – there are these day dream type sequences where he wears an orange uniform and goes in to NASA to plan a space mission. He’s in the room with the bosses but when the phone rings everybody ignores it until he says, “I’ll get it.”

In the best weird fantasy sequence he goes to the moon. He plants the flag upside down. He’s up there with his partner Bobby (Leonard Kuras), who makes the same kind of small talk as when on patrol, and pulls out a hot dog he says was packed for him by “the little lady.” The earth from space is depicted by a plastic globe so shiny you can see light reflected on it – it looks cool! And there’s at least one hint that he’s kind of losing touch with reality when he finds Tang in the cupboard and asks his wife “When did you start buying this crap?” But she says he bought it. 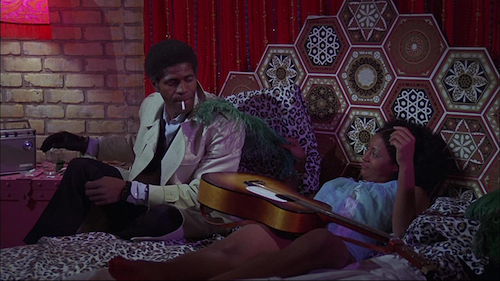 He doesn’t steal money like his partner does, but he likes to beat dudes up, and he’s not a great guy. He has a young mistress played by Paula Kelly and just like her character in TROUBLE MAN she’s mostly stuck waiting around for him in a visually appealing era appropriate apartment. But this time she’s more defiant. In her biggest scene she lays on the bed playing guitar and improvising goofy songs about him until he gets pissed thinking she’s high or drunk. Weirdly her character is not named, only credited as “Black Chick.”

There’s probly more surrealism than there is action, but I must take my hat off to the bar fight scene, where windows, a table, a drumset and a jukebox get knocked over or smashed. It should be noted that he’s entirely out of line. Jerry Jones, who wrote and co-starred in DOLEMITE and THE HUMAN TORNADO (and was portrayed by Keegan-Michael Key in DOLEMITE IS MY NAME) plays the club owner.

Unfortunately I find the movie way more interesting than actually involving. I think the trouble I have is with George’s state of denial – from the beginning to the end he seems to know that he’s a piece of shit acting like a piece of shit in a rotten system, and everybody keeps telling him that, and he keeps stubbornly refusing to admit it. Right at the beginning he’s being chewed out by a nagging wife who is clearly correct and easier to side with. And then he’s cold to this young, fun mistress who doesn’t seem to have any reason to want to be in his presence. He’s hard to like, and not in a cool way. That’s fine, that’s the story, but that combined with scattershot storytelling and reality-fantasy line-blurring makes it less engrossing and more frustrating than if he had the traditional learning-a-lesson-over-the-course-of-the-story type arc. For me, anyway.

Still, I respect that the character and the movie itself refuse to fit into any of our preconceived notions of what they’re supposed to be. And plenty of people seem to enjoy watching it more than I do.

Apparently one problem the movie faced is that two uncredited writers claimed to have worked on it, and the WGA interfered with distribution. But it’s hard to imagine it would’ve gotten a fair shake anyway. I’m not sure but I got a guess how people who came to see guns and boobs reacted to St. John’s weird, confrontational and intentionally uncomfortable vibe. I don’t think this was ever gonna appeal to the young people.

St. John continued to act sporadically, mostly on random TV episodes. His only other directing credit is a documentary called A MAN CALLED GOD that isn’t on video but played a film festival or two in 2014. IMDb doesn’t have much information on that, but fortunately his son Kristoff is credited as co-director, and he was an actor on The Young and the Restless, so Soap Opera Network did an article. They described it as “a horrifying documentary film detailing his family’s unsuccessful 1980s quest to find God in India.” When Kristoff was a teenager the St. John family moved to India to make a documentary on a guy who claimed to be the reincarnation of Sai Baba. When they realized he was just a shitty cult leader they abandoned the project and came home. About 30 years later Kristoff convinced his dad to let him take the footage out of storage and make something out of it. 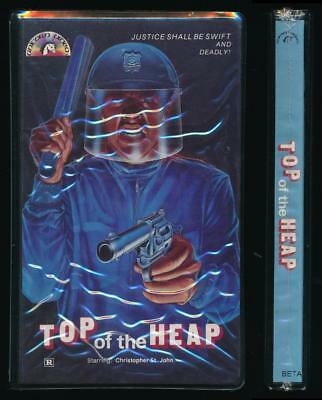 Kristoff died tragically last year, while depressed about the suicide of his own son. But his father Christopher (whom you last saw as the mayor in the 1988 TV movie THE SECRET LIFE OF KATHY McCORMICK) is still alive, probly somewhere in his ‘80s, still not on the moon. Though his strange and very personal passion project languished in obscurity for decades (evidence: it was released by Unicorn Video) I noticed in my research that plenty of more prominent writers than me have discovered it in the last few years. In fact just in July Richard Brody raved about it as a lost masterpiece in The New Yorker. I think the combination of a restored blu-ray by Code Red, access on Prime Video and the issues of the day have conspired to bring it to people’s attention. I hope someone tells him that, and I hope when they do someone else gets up to answer the phone.

Allen Garfield Almeria Quinn Christopher St. John Jerry Jones Ji-Tu Cumbuka Paula Kelly
This entry was posted on Wednesday, September 9th, 2020 at 12:10 pm and is filed under Crime, Drama, Reviews. You can follow any responses to this entry through the RSS 2.0 feed. You can skip to the end and leave a response. Pinging is currently not allowed.

5 Responses to “Top of the Heap”