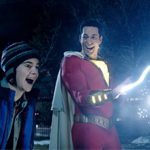 It begins in the past, when a kid (Ethan Pugiotto, MY BIG FAT GREEK WEDDING 2) and his dad (John Glover, MEET THE HOLLOWHEADS, BATMAN & ROBIN) and older brother (Landon Doak) are involved in a car accident, and as it’s happening the kid somehow flashes from the backseat of the car to the cave where the wizard (Djimon Hounsou, ELEPHANT WHITE) explains the mythology of the movie, which involves magic powers he has to pass on to a new hero, and monster statues representing the seven deadly sins. But after some simple testing I guess the wizard determines this kid is a dick and not worthy of the powers in question, so he turns him away.

That’s kind of a similar move to the 1989 BATMAN, opening with what you can assume is the origin of the titleistical hero, but turns out to be somebody else. That was 1974, and we skip to the present day when he has grown up to be Dr. Thaddeus Sivana (Mark Strong, ELEPHANT JUICE), a rich guy who could do anything he wants with his life and has chosen to spend it hiring experts to help him track down that fuckin wizard who wouldn’t give him super powers that one time. He still uses the Magic 8-Ball he had in the childhood flashback and still has the exact same relationship with his dad and brother (Wayne Ward, Cop #4, THE STUPIDS). It’s not as bad as in GREEN LANTERN, but I really hate when adult characters have the exact same concerns as they had as children. Obviously it’s a comic book fantasy, but they’re definitely trying to ground it with some real world texture, so it’s hard to accept this Muppet Babies shit. If it’s gonna be a child’s eye view of the world I think you should go all the way, like Tobe Hooper’s INVADERS FROM MARS, where the kid gets to drink Dr. Pepper all day and talk to the military brass about how to handle the invasion. 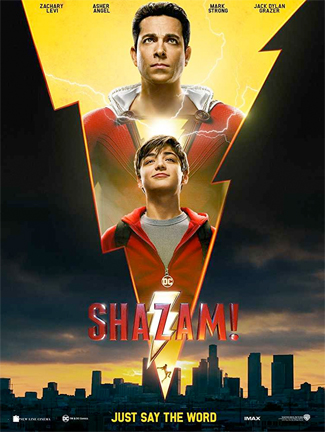 So anyway. We then meet Billy Batson (Asher Angel, JOLENE), who also dedicates his life to following up on a childhood incident, but at least he’s only a teen and it’s his mom abandoning him at a fair. He searches for her while bouncing from one foster family to the next, but now he arrives at a loving multi-cultural household with the most likable actor from The Walking Dead (Cooper Andrews, DEN OF THIEVES) as the dad. Billy is resistant, of course, but this kid Freddy (Jack Dylan Grazer, IT) comes on aggressively as a smart-assed new brother/pal/partner in crime showing him the ropes.

A bunch of this movie felt kinda off and awkward to me. Freddy is a little much, the conversations don’t quite click, people make weird gestures just because they’re required by the plot, it feels like a dud. But Billy’s encounter with the wizard is really well done, utilizing Sandberg’s chops as a horror director – I didn’t think LIGHTS OUT amounted to much of anything, but it did have some well put together sequences, and this does too. Something eerie happens while Billy’s on the subway and he finds himself in this weird place where he has a perfect deadpan line about which stop he was trying to get off on.

And when he later says “Shazam!” and magically turns into his super hero alter ego (Zachary Levi, ALVIN AND THE CHIPMUNKS: THE SQUEAKQUEL) the movie takes off. Grazer as Freddy has a much smoother chemistry with him, authentically bugging his eyes out and having joyful laughter as they test out his new-found super powers. I wonder if they considered giving him the ability to identify songs by listening to a snippet of them? Flying is hard, but he has super strength, and can shoot lightning. It kinda has the feel of kids coming across a cache of illegal fireworks and spending the afternoon figuring out different things to blow up, having too much fun to be concerned about the danger they vaguely know they’re putting themselves in. Kind of a JACKASS attitude. They also use his adult appearance to buy beer, and of course the traditional attempts to thwart purse snatchers and convenience store robbers (he’s excited to get shot at to see if the bullets hurt him). I laughed at alot of the bits, like the way he transforms at school and puts on a trenchcoat to pretend to be a parent coming to pick up Freddy.

Dr. Sivana is a pretty generic villain, and I don’t know why the Catholic concept of deadly sins is combined with this wizard religion, but there are a bunch of cool monsters, and anyway it’s more about the friendship/brotherhood of these two kids as they try to figure out together how to do this super hero thing. It’s kind of a charmingly small version of a super hero, because so much if it involves having to sneak out of his bedroom at night. He seems more worried about his foster parents finding out what he’s up to than the world at large.

There’s a sweetness in the movie’s glorification of adoptive families. Andrews as foster father Victor and Marta Milans (THE DISAPPEARANCE OF ELEANOR RIGBY) as his wife Rosa are lovable (if one-dimensional) and there’s lots of cute business with the other members of the family, like little sister Darla (Faithe Herman, BODIED), who discovers what’s going on and is very proud of herself for being able to keep a secret.

The fact that the last act adds a new element that I didn’t expect (admittedly it’s right from the comics and could be obvious to most people) and is actually one of the more exciting parts goes a long way toward redeeming its flaws. Although overall I liked WONDER WOMAN much more, you gotta admit its big end fight is the not-as-good part. This one puts its peaks in the right places.

By the way I believe this is the first movie of the year, before SPIDER-MAN: FAR FROM HOME, to have a scene where a super hero, using a secret identity, has to rescue friends from a ferris wheel that’s being attacked by monsters. I don’t know if there’s an award for that or not but it’s worth pointing out.

I didn’t love SHAZAM! like I did AQUAMAN, but it definitely won me over by the end. I guess that shouldn’t be a surprise because it follows the universally beloved formula known from the popular ’80s sitcom Punky Brewster. Spunky kid is abandoned by mother in public space, finds loving foster home, uses “Punky Power”/super power to make friends and inspire others. Really pretty much the only two differences are 1) his shoes match and 2) he befriends a wizard played by Djimon Hounsou instead of a magical wish-giving creature named Glomer. But I will be very surprised if part 2 isn’t based on the episode where Punky and her friends got trapped in a cave and had to kill a giant spider.

They have indeed announced plans for a sequel. On one hand I don’t really care if there’s another one or not. On the other hand, the mid-credits scene introduces a talking caterpillar villain. It’s from a DC comic, and therefore part of an attempted movie franchise that has had some highs but stumbled in part by trying to force the type of interconnectivity that Marvel has mastered. I think they had a smart approach to that here, locating it on the outskirts of the DC Universe, where everybody reads about Batman and Superman in the newspapers but would never expect to see them in person. Like Tom Cruise. Freddy is obsessed with super heroes and actually owns a batarang that was left behind at some crime scene and sold as a collectible, with a display stand and certificate of authenticity. At the end there’s a cameo appearance by Superman, but they strategically leave his face out of frame, like Jesus in BEN-HUR. (The costume looks shitty compared to Henry Cavill’s, though. Kind of spoils the illusion.)

The idea of Shazam appearing in a movie with Aquaman or Batman is not enticing to me, but referencing them from within Shazam’s world is pretty cool. There’s an end credits sequence animating crude stick figures drawn on lined notebook paper for jokes about Shazam meeting the various Super Friends. Other than a stylistic resemblance to SPIDER-MAN: HOMECOMING‘s credits it’s pretty good.

It’s kind of a movie without an age group. I imagine I would enjoy it more if I was a kid, but it opens with a pretty terrifying car accident and has some surprisingly brutal parts here and there. Then again I’m sure it’s not as bad as TEMPLE OF DOOM, and we as a society managed to survive that for a while. So it’s probly best experienced by parents with their kids who like super heroes and don’t scare easily. But I kinda liked it too.

Asher Angel Cooper Andrews David F. Sandberg DC Comics Djimon Hounsou Ethan Pugiotto Faithe Herman Jack Dylan Grazer John Glover Landon Doak Mark Strong Marta Milans Zachary Levi
This entry was posted on Tuesday, August 20th, 2019 at 12:36 pm and is filed under Comic strips/Super heroes, Reviews. You can follow any responses to this entry through the RSS 2.0 feed. You can skip to the end and leave a response. Pinging is currently not allowed.