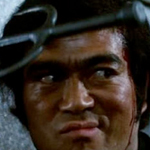 And he’s definitely in the Bad Motherfucker Hall of Fame. We’re introduced to him disguised as a Buddhist monk to visit Tateki Shikenbaru (Masashi Ishibashi, SHOGUN’S NINJA) on death row. Shikenbaru is apparently a murderer, but he seems like an honorable guy who’s excited when he realizes he gets to have a karate duel in his cell with someone as good as Tsurugi. But Tsurugi hits him with a special delayed-asphyxiation blow that causes him to collapse just before execution. The prison officials decide they legally and/or ethically have to transport him to a hospital, at which point Tsurugi and his sycophantic partner Rakuda (Goichi Yamada, DOUBLE SUICIDE AT NISHIJIN) ambush the ambulance, abduct the prisoner and send him to Hong Kong.

Back at his bachelor pad full of exercise equipment, Tsurugi is kicking back to enjoy an apple and watch the news (partly about his exploits) when Shikenbaru’s siblings Nachi (Etsuko Shihomi, KARATE INFERNO, GOLGO 13: ASSIGNMENT KOWLOON, MESSAGE FROM SPACE) and Gijun (Jiro Yabuki, KAGEMUSHA) show up to ask him what’s going on. They hired him to bust their brother out, but they don’t actually have the 3 million they promised him in payment, so he, uh… well, he fights Gijun, causing him to plummet to his death, and sells Nachi into, uh, sex slavery. Ha-hem.

Look, I told you he was a bad person. I was glad at least he never rapes anybody like Chiba’s presented-as-heroic character in the KARATE ANIMAL FIGHTER trilogy. He does forcibly kiss two women though. And sell this one into prostitution. You know what, I’m not gonna defend him. 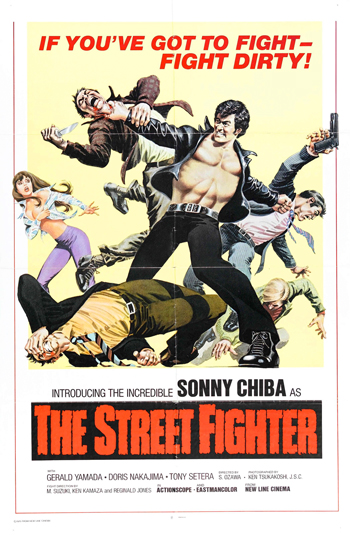 Once that’s taken care of he tries to mind his own Bad Motherfucker business, but the underworld is going crazy because some oil tycoon died and his only daughter Sarai (Yutaka Nakajima, EXECUTIONER, TOMIE: RE-BIRTH) is ripe for the picking. This guy Mutaguchi (Fumio Watanabe, CRUEL STORY OF YOUTH, LATE AUTUMN, LONE WOLF AND CUB: SWORD OF VENGEANCE) sends his guys to hire Tsurugi to kidnap the heiress, but he refuses to work with them when he realizes they’re Hong Kong mafia. He promises not to rat them out because “don’t worry, there’s an evil code of conduct,” but they still figure he knows too much and try to kill him.

Don’t ever do that. You’re just gonna piss him off. After fending them off he says he knows what he has to do and heads to the Nippon Seibukan dojo, where karate master Kendo Masaoka (Masafumi Suzuki, BRONSON LEE, CHAMPION) has sworn to protect Sarai. Tsurugi just struts in and challenges the master and his entire dojo.

When he stands in the middle of all of them in their white gis it really underlines how his costume expresses his character. It’s a black gi, no logo, with brown leather gauntlets that we later learn have tiny knives in them. He doesn’t remove his black leather shoes or white socks, and instead of a black belt tied around his waist he wears a brown leather studded one. It’s a rebellious uniform that makes sense for a guy who earlier, when identified as belonging to a certain school of karate, grunted “I belong to nothing.”

Bruce Lee pulled a similar coming-in-alone-to-challenge-a-whole-school stunt in FIST OF FURY, and Chiba’s screen fighting style seems hugely influenced by Lee. He has the mega-expressions, the intense breathing techniques, even a little bit of the dancing-around footwork, and that ENTER THE DRAGON move where he jumps on top of somebody and wiggles his feet to crush them off screen. The duel with Masaoka is long and Tsurugi dominates for a while, but then he starts to get thrown around like a football. The first time he flips and lands on his feet, the second he slides on his belly and his head smashes a big piece of wood into two.

Two very cool twists happen at this point. #1, Masaoka realizes that Tsurugi is the son of a guy he used to know who sought to infuse Japanese karate with Chinese kung fu. #1b, the mention of his father causes a childhood flashback that reveals the tragic backstory to him being such a fucking asshole.

#2, it turns out that he didn’t come here to kidnap Sarai before those mafia assholes can. He came to prove to Masaoka that he should be hired to protect her from them. So there it is. He’s doing a good guy thing. So what if it’s just out of vindictiveness?

I love that Masaoka sees something in him – perhaps the honor of his “evil code of conduct” – and trusts him. I mean, it’s overly forgiving. But it’s heartwarming. Tsurugi immediately dismisses the idea that any of his dad’s good qualities were passed on to him – “Bullshit. My father was one man. I’m another” – but I don’t think we’re supposed to believe him. Another moment of sensitivity comes later on when we learn that Rakuda’s loyalty comes from Tsurugi having rescued him from some unknown doom in Singapore. A life debt. He’s Tsurugi’s Chewbacca or his Short Round. When Rukuda is killed, it actually makes Tsurugi cry!

Sarai at first doesn’t want anything to do with this “animal,” and he doesn’t win her over with charm. He does it by showing up out of nowhere to rip the dick off a henchman (Chico Lourant, Seijun Suzuki’s GATE OF FLESH) who tries to rape her. Unfortunately the rare black character is a rapist, dampening what otherwise would be one of cinema’s most joyous moments.

Tsurugi has a series of misadventures including but not limited to having his car picked up and dumped off a bridge by an excavator and intentionally jumping through a third (or so) story window into a flatbed truck. Ironically he does that during a confrontation with Shikenbaru, who comes to avenge him for having caused his brother to jump out a window into a flat sidewalk. When Tsurugi first sees Shikenbaru he genuinely looks surprised and asks what he’s doing there. But he knows.

“I’ve got something going on. I don’t have time for you.”

There’s lots of great fighting, with more graphic bodily harm than usual. I like when he throws a guy over a railing causing a giant splatter of bright red DAWN OF THE DEAD style blood. And of course there’s a famous and influential scene where he punches a guy in the head and it cuts to an x-ray of his skull fracturing. Hats off to Shout Factory for depicting that guy in the cover art, including his Joker-esque magenta suit with orange shirt.

The evil boss is Dingsau, the Cutthroat of Kowloon (Rin’ichi Yamamoto, BATTLES WITHOUT HONOR AND HUMANITY, LADY SNOWBLOOD: LOVE SONG OF VENGEANCE), a dude with curly reddish hair slightly reminiscent of Tom Jones’s. At least to some extent he follows the evil code of conduct, because he chops up a guy who shoots Tsurugi during a duel because it’s “playing dirty.”

I’ve seen this a couple times over the years and forgot most of it, except for the final duel in the rain. Tsurugi wins with a ROAD HOUSE style throat rip. Except he’s on the ground and he smiles and gets to his feet holding up the chunk of throat flesh victoriously. And that’s it! That’ll do, pig.

It’s such a gloriously sick take on a triumphant ending, especially when you consider that the guy he killed was coming after him for something genuinely terrible! I suppose we could say it balances out because Shikenbaru was a murderer who was about to be hung by the state until Tsurugi got involved. He got to live a little while extra. But we still can’t justify what Tsurugi did to the two siblings. I don’t care how much money they owed him.

Shigehiro Ozawa directed 56 films before this one, none of them as well remembered, at least in this part of the world. I think they were all practice to get ready for this moment. In the next couple years he did his final seven films. They include the two STREET FIGHTER sequels (which he also wrote) and one of the SISTER STREET FIGHTERs.

Even just the American release of THE STREET FIGHTER is historically important, because

2) it was ones of the hits that helped establish New Line Cinema. They released THE TEXAS CHAIN SAW MASSACRE at the beginning of October and this at the end of November. Their crass commercial instincts made a permanent mark because they decided to Americanize the names of the actors. Instead of the poster saying “starring Shinichi Chiba” it says “INTRODUCING THE INCREDIBLE SONNY CHIBA AS THE STREET FIGHTER.” Jack Sholder, who would later direct A NIGHTMARE ON ELM STREET 2 and RENEGADES, edited the trailer and made the cool English language credits. He was sure to include a prominent credit for himself! I’m not sure whether or not he’s responsible for the end saying

Watch for RETURN OF THE STREET FIGHTER

Somehow I never did follow that instruction. I haven’t seen RETURN OF THE STREET FIGHTER or THE STREETFIGHTER’S LAST REVENGE (all three were released in the same year!), but I bought the recently released blu-ray set from Shout! Select, so I’ll be reviewing them in the near future.

But I really can’t emphasize enough how great THE STREET FIGHTER is. If there’s another scary asshole who’s as cool as Sonny Chiba in this movie, I don’t know who he is.

Etsuko Shihomi Goichi Yamada Jack Sholder Jiro Yabuki Masafumi Suzuki Masashi Ishibashi New Line Cinema Rin'ichi Yamamoto Shigehiro Ozawa Sonny Chiba
This entry was posted on Wednesday, August 28th, 2019 at 9:54 am and is filed under Action, Martial Arts, Reviews. You can follow any responses to this entry through the RSS 2.0 feed. You can skip to the end and leave a response. Pinging is currently not allowed.

9 Responses to “The Street Fighter”