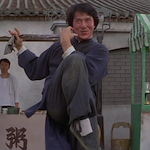 When DRUNKEN MASTER came out in 1978, Jackie was just beginning to explore his comedic approach to kung fu movies, and it established him as a major movie star in China. Sixteen years later, when DRUNKEN MASTER II (a.k.a. THE LEGEND OF THE DRUNKEN MASTER) came out, Jackie and martial arts cinema were in an entirely different place. Jackie had moved over to Golden Harvest, directed ten movies, started the POLICE STORY and ARMOUR OF GOD series, even done a few American movies. And then he returned to the famous folk hero character in the only time he was ever directed by the great Lau Kar-leung (EXECUTIONERS FROM SHAOLIN, THE 36TH CHAMBER OF SHAOLIN, HEROES OF THE EAST, DIRTY HO, THE 8 DIAGRAM POLE FIGHTER, TIGER ON BEAT). But they fought about the shooting and fighting styles and Jackie took over to direct the final fight that the movie’s best known for.

It’s immediately clear that it’s a much bigger production, with period cars and costumes and giant crowds mobbing a steam train. Fei-hung schemes to avoid taxes by sneaking his gingseng root into a British Consul’s luggage, but when he tries to get it back (using the classic “let like a hundred ducks loose on the train” distraction) he sees an old guy (Lau Kar-leung himself) stealing from the luggage and chases him off of the train, fighting him with fists and weapons and following him to a hut.

The old man seems at first annoyed, then kind of amused by him. He calls him a “henchman” and a “mule,” which I take to be like calling him a fascist or a narc. Fei-hung challenges him to yet more fighting, and he seems to be accepting just to humor him. But he’s surprised to see him using the Eight Drunken Gods fighting style. He says it’s “not powerful enough, and can’t kill,” but they seem to bond over admiring each others’ skills, so he warns Fei-hung that his train is leaving.

He gets back onboard not realizing their packages have been switched. The old man has the ginseng, Fei-hung has the Emperor’s jade seal that the British Consul (Louis C. Roth, “Protection Money Collector, A BETTER TOMORROW II, “U.S. Reporter,” KICKBOXER) was bringing to the London Museum of Art. 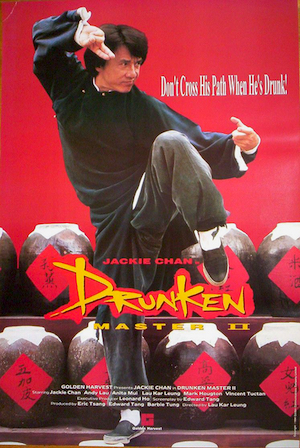 That Consul is enjoyable gwailo villain/symbol for Western imperialism. I don’t think he has a name, he has zero good qualities, and he doesn’t have one line that he doesn’t say sounding like a total dick. He feels entitled to a historical Chinese treasure, complains that it’s “bloody impossible to sleep” with people practicing kung fu next door at the Wong family’s Po Chi Lam clinic, and is mad he can’t buy it and have it bulldozed. Also he sends goons (including “the new foreman”) to a steel factory to tell the workers they’ve “fallen behind” and have to work extra shifts for a month. The workers demand to be paid overtime, and a white guy named Mr. Smith (Mark Houghton, “Hit Man,” SHE SHOOTS STRAIGHT, “Blonde Gunman,” MISSION OF JUSTICE) basically sums up much of the modern American work situation: “You give us no choice. You either work the overtime, or we close the steel mill down, and you’ll all be without jobs. Now, you can take it or leave it.”

And pretty soon they’re lighting guys on fire. Later in the movie, when they have the steel they need, he tells them to lay off the workers, shut down the factory, and hire cheaper workers when they reopen.

If I understand correctly, Fei-hung’s mother died a long time ago and her sister Ling, now played by Mui, became his stepmom. Mui is really funny in the movie, and I like that they have a relationship more like mischievous siblings. He helps cover for her when she hides a rowdy game of Mahjongg from Master, pretending she’s giving her friends holistic gynecology treatments. And she helps cover for him losing the ginseng, although poisoning a patient with Master’s 300-year-old bonsai tree turns out to cause other problems.

When I reviewed part 1 I wondered if a fighting style that requires heavy drinking was sustainable, and said, “I’ll have to check in to see how this rough lifestyle has affected his health and relationships later on.” Well, no signs of liver troubles or alcoholism, but Master forbids his son from fighting, drinking, or especially drunken boxing. So it’s a big deal when he gets in a brawl with the British Consul’s Chinese stooges, who suspect he has the seal. Seeing an opportunity to promote Po Chi Lam by showing off his drunken boxing, Ling and friends buy all the wine they can carry and throw them to him. He’s flipping around finding different ways to pour into his mouth as he fights, getting wobblier but more powerful.

It’s a fun style to watch, and I always enjoy when they announce the names of their moves, like when he does a flying, spinning head butt and then says “That was the crazy corkscrew open wine bottle.”

But the fight and the bonsai/ginger switcheroo and the lies all get Fei-hung in the doghouse with his dad, who takes a huge jug of wine and pours it into Fei-hung’s mouth, like the old “make the kid smoke the whole pack of cigarettes” punishment, and kicks him out.

While out drinking he proves there’s a specific line of intoxication you gotta stay behind to be a Drunken Master, because he’s too drunk when those goons come after him again, badly beat him and leave him hanging naked in the town square. To make him feel better, his servant Tso (Ram Chiang, COLD WAR 2) indicates that all the women in town were impressed by his dick. But he cries and swears not to drink anymore.

An hour into the movie that old man from the train finally shows up looking for Fei-hung. Ling fights him and it turns into a big scuffle until he identifies himself as Fu Wen-chi, “the last decorated Manchu officer,” and dad invites him in. He explains about the seal (we cant let foreigners take this important shit from us) and suddenly Fei-hung and Wen-chi are being attacked by dozens of dudes with axes, swinging benches as weapons, spinning and flipping under tables, climbing across rafters, breaking hand rails, collapsing stairways, tipping over ladders, pushing guys out windows, breaking awnings.

The last third is less misunderstandings and hijinks, more crazy Jackie Chan shit, culminating in Fei-hung and his sometimes-friend Tsang (Felix Wong, VENGEANCE) storming the steel factory. The British turn out to be smuggling stolen Chinese artifacts in shipments of rebar. (Somebody should call THE PHANTOM!) As a Sober Master, Fei-hung has a striking white robe and fan. The fight against “bad English suit” wearing sellout John (Ken Lo, CHINA STRIKE FORCE, RUSH HOUR 2, IP MAN: THE FINAL FIGHT, SPL II, PARADOX) involves alot of elegant spinning moves and props including chains, a bed of hot coals that he falls down into and crawls across (for real, of course), barrels on ropes, mine carts, hot steel bars. He catches on fire at least three times, two times kicking with flames on his shoes.

Since DRUNKEN is in the title he obviously has to turn to his specialty to win. He uses some industrial alcohol to spit flames, and one thing leads to another and he basically does a drunken monkey version of Hulking out. He seems to go fast speed through every fancy move ever invented (and at least one dance move: the worm), punches through tables, coughs up flames and bubbles. By this point his robe is torn up and greyed from rolling around on the ground and looks like a beggar again.

According to IMDb trivia, they spent four months filming the seven-minute fight at the end, and Jackie said they typically got about three seconds of usable film a day. What is this, stop motion?

It was the third to last film directed by Lau, who with SPIRITUAL BOXER in 1975 became the first martial arts choreographer turned director. According to his Hollywood Reporter obituary he was “a fourth-generation direct disciple” of the real life Fei-hung and started his career as an extra and stuntman in the 1950s movies about him. For DRUNKEN MASTER II he wanted to use Wong’s authentic Huen-Gar style, but Jackie correctly guessed that fans wanted to see a drunken style in a DRUNKEN MASTER movie. (Lau also wanted to use wires, which Jackie didn’t believe in.)

Since he didn’t get his way, Lau quickly made DRUNKEN MASTER III starring Andy Lau, with Willie Chi as Fei-hung, taught drunken boxing by Lau himself. He also co-starred in his final film, DRUNKEN MONKEY (2003), a new-era Shaw Brothers production with Wu Jing and Gordon Liu. Not to be confused with the Indian smoothie bar chain of the same name.

I didn’t really research what versions of DRUNKEN MASTER II exist until after I rewatched it. I have an import DVD I bought 15-20 years ago released by a company called Thakral. Wikipedia tells me that it’s the only release with the full Hong Kong cut and English subtitles, but it’s cropped from 2.35.1 to 1.78:1. I didn’t know that while watching, but I did know it was non-anamorphic and not an ideal transfer. I’ve always avoided the Miramax release, which I think is dubbed only, but apparently I didn’t need to worry too much about their edits – I guess it’s just alternate takes on the drunken singing scene, and cutting the very last, very bad joke where he’s supposed to be brain damaged from the industrial alcohol and sticks his tongue out for a Trump-style caricature of a mentally disabled person. I definitely wouldn’t miss that.

When I first saw this movie sometime in the ’90s I pretty much thought it was the greatest kung fu movie ever. I’m sorry to report that it doesn’t inspire the same awe in me now. It has tons going for it: impressive production value, Mui and Lau are very appealing in their roles, and of course the Chan/Lau vs. axe gang and factory fights are excellent. But to me it doesn’t have the emotional core or narrative elegance of Lau’s Shaw Brothers classics. The villain’s most hissable crime, his treatment of the factory workers, is completely separate from Fei-hung’s privileged life, and he doesn’t exactly join their cause or pay much thought to what’s going on with them. He just does what the old man told him to do.

So now I think it’s most notable as a showcase of Jackie pushing his kung fu to a high level as far as poses and moves. It’s not as focused on the stunts and the elaborate choreography of props as many of his ‘90s movies, and those are things I love him for. But it’s an undeniable joy just to watch him move in this thing. Also it’s a good message not to drink industrial alcohol.

Anita Mui drunken boxing Felix Wong Jackie Chan Ken Lo Lau Kar-Leung Ti Lung Wong Fei-hung
This entry was posted on Monday, May 11th, 2020 at 9:38 am and is filed under Action, Martial Arts, Reviews. You can follow any responses to this entry through the RSS 2.0 feed. You can skip to the end and leave a response. Pinging is currently not allowed.