If you look for pictures from John Woo’s 1986 breakthrough A BETTER TOMORROW you’ll mostly find Chow Yun Fat lighting a cigar with a burning counterfeit American $100 bill, or wearing a real nice suit holding two guns. That’s from the beginning of the movie when his character Mark is a big shot in a Hong Kong syndicate. That’s not a better tomorrow, that’s a more financially stable yesterday. Most of the movie takes place years later, when Mark has been shot in the leg and has to wear a metal brace, so he’s now just an errand boy instead of a Big Brother. 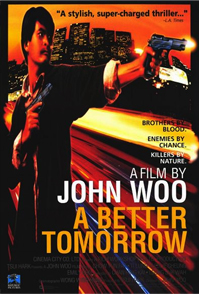 In fact, Mark is not the main character, I’d rank him at #3 in story importance. The movie focuses on Mark’s partner in crime Ho (Ti Lung) and Ho’s cop brother Kit (Leslie Cheung). Like Mark, Ho is hot shit at the beginning, considered a Big Brother by the gang, but he gets busted, while a trainee named Shing (Lee Chi Hung) gets away. After a 3 year prison bid Ho gets out and genuinely wants to go straight, to have a better tomorrow. He turns down high-paying crime gigs and works at a taxi garage owned and operated by reformed ex-cons. He hopes all this will allow him to become close to his little brother, but no dice.

See, while Ho was away that prick Shing worked his way up the ladder. Now he basically runs the gang, and he had Ho and Kit’s uncle assassinated. Kit blames Ho and won’t forgive him. He won’t even talk to him as an estranged brother, he tells Ho to address him as “Officer.”

Kit’s life is not strawberries and cream either. He’s been investigating this gang for years but he gets kicked off the case just for being related to Ho. His marriage isn’t going too hot either. He spends so much time on the case he’s not supposed to be on that his wife Jackie (Emily Chu) feels neglected. Kit could really stand to switch faces with Castor Troy for a while so his wife can get some attention. There’s a weird scene where Jackie sits looking at a huge, fancy birthday cake that she apparently made for herself while he completely ignores her to look through some files. She’s in tears by the time he finally talks to her, and when it turns out that he did remember to buy her a present it’s like that makes everything okay.

But you should’ve fuckin paid attention to her and ate the cake, dumbass! Looked like a good cake, too.

This is John Woo, so these relationships can be mended, but only after some bleeding. The old boss and Ho respect each other, but the gang is under new management. Shing wants Ho back on the team, thinking they can take advantage of his brother being a cop. So they try to force him into it through sleazy tactics like attacking the garage. Pushed over the edge, Ho does pick up guns again, but only to get his brother the evidence to put these dicks away.

Alot of John Woo movies are about the overlap between heroes and villains, the bad things good people do, the good things bad people do, the bond between cop and criminal, the unlikely respect between men on opposite sides of a fight. But the main theme here is the capacity for villains to become heroes, the fight to become a better man, the hope for a better tomorrow, or to prove that they have (according to the literal translation of the title) “The True Colors of a Hero.” Ho and Mark start out as these slick, cool anti-heroes, then they become regular working class individuals and their goal is not to get back on top again, it’s just to stay out of that life. Well, Mark kind of wants to go the “one last score” route, but Ho truly wants to go straight. And he has a going-straight mentor in his boss at the garage (Kenneth Tsang).

Kit, I have to tell you, is one of the dorkiest John Woo heroes. He’s just such a prude, kind of effeminate and in my  opinion a shitty husband and brother. Not exactly the type of movie cop you watch and think “I wanna be him when I grow up.” Mark, on the other hand, is really fuckin cool. When he’s rich he looks like THE KILLER, but later he’s more of a relatable tough guy wearing a black duster and chewing a matchstick. A BETTER TOMORROW was actually a surprise smash hit, a low budget movie without much advertising that broke Hong Kong box office records and influenced a huge run of crime movies throughout the ’80s and ’90s. And Mark stole the movie. Apparently black dusters became hugely popular after the movie and are still sometimes called “Brother Mark’s coat.”

I really like this one. It has a good melodramatic story, some impressively stylized violence (like when Mark gets a slo-mo punch to the nose and then the blood flows out. How did they even do that?) and a catchy keyboard theme song that I think is the perfect balance of cheesy and awesome.

In later Woo movies his shootouts and his style got more elaborate, bringing this type of movie up to maximum strength. But the power and the success of this one show that it’s really more about the characters and the emotions than the ten thousand flying bullets. There’s a great shootout where Mark massacres a roomful of guys responsible for setting up Ho. It’s kind of funny because he comes in with a bunch of guns in his coat and he stashes them in some potted plants in the hallway, then he goes in and shoots the guys, comes out and picks up the different guns as he needs them. It doesn’t make alot of sense because he already was able to fit them in his jacket when he came in, and nobody frisked him or anything, so why does he need to stash them? That’s what I thought but then I realized maybe he’s pacing himself. He wants to make sure he doesn’t run out of bullets so he parsels the guns out. By the time I get to this point in the hallway I should have this many bullets left.

But as much as I enjoy that scene I don’t like it as much as the one where Mark and Ho see each other for the first time after Ho gets out of the joint, and they embrace each other and talk about the shitty places they’re at in life and what they should do about it. Pure manly soap opera, the John Woo that’s not known by today’s generation that just makes fun of his slow motion doves and sideways guns.

Most of all I like this movie because it has that theme of redemption. You get to root for these guys and they’re almost doing the right thing. They’re the best type of movie-violence-creators – the ones who are only killing so they won’t have to kill anymore.

Chow Yun Fat Hong Kong action John Woo Lee Chi Hung Leslie Cheung Ti Lung Tsui Hark
This entry was posted on Thursday, October 14th, 2010 at 1:26 am and is filed under Action, Crime, Reviews. You can follow any responses to this entry through the RSS 2.0 feed. You can skip to the end and leave a response. Pinging is currently not allowed.

46 Responses to “A Better Tomorrow”