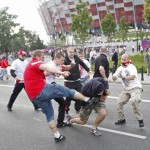 The movie comes from our friends the Shaw Brothers and it’s apparently considered one of their best. And god damn if it isn’t one of the best martial arts pictures that I’ve seen, anyway.

Obviously this is one of the lush period picture kung fu movies. It starts with a big battle between elaborately costumed warriors. I mean they got these colorful robes and one of the squads are guys with bow and arrows wearing what almost looks like Santa Claus costumes. All this color and choreography on a big soundstage, it looks like a big song and dance number by that Bugsy Berkeley dude.

The good guys in this scene, who are not dressed as Santa Claus, are the 8 Yang brothers and their dad. All but two of them are killed, betrayed by Pan Mei, who I don’t think is the same guy as Pai Mei, but I think he’s their grandpa? The queen’s dad, anyway. I’m not sure but the important thing is, the guy is a dick, getting all these Yang brothers killed. For fuck’s sake your a grown man, Pan Mai. You got a long beard. You should know better.

None of the Yangs have names, they’re just numbered chronologically. Yang 6 comes back “a little bit demented” by the trauma according to mom. He comes home to the temple and laughs like a nut while describing how all his brothers got killed. He wants revenge on Pan Mei but, well, it doesn’t work out.

Which leaves two Yang siters and the M.I.A. Yang the fifth. He deals with his troubles by journeying to a monk temple on Wui Tan Mountain and trying to join up. This is some funny shit. He can’t hide that he’s crazed and vengeful. And these are monks, they don’t believe in violence and they know he can’t focus on monk business, so they turn him away. The way he deals with it is, he threatens all of the monks, storms into the head shaving ceremony, grabs the knife and crazily cuts off his hair, leaving himself all bloody. Then he punches a shrine, grabs two huge sticks of incense and burns six dots onto his head.

I mean how are they supposed to deal with that? They can’t call the cops. The next day, I don’t know if they drew straws or something, but a couple of these poor bald bastards have to tell him something like:

hey man, no offense but the abbot says after you’re, uh, feeling better, you know, I mean maybe… well, what I’m trying to say is — I mean not me, the abbot is saying this — he’s saying that you should– That you should leave. (cough). Hrem. Excuse me. I mean not right away or anything, it’s just… it’s just… Hey, isn’t pole fighting cool? I love pole fighting, it’s fun. What were we talking about? Well I better go.

Well, this doesn’t go over well.

From that point I knew the movie had me, and it never lets up after that. I think where RZA’s brotherhood thing comes in, not only is this Yang #5 torn up by the loss of his family, but the monks end up becoming a new family to him. And the real bitch is, the abbot secretly goes to talk to Yang’s mom about his troubles, and then Pan Mei kills him too. Is that fucked up or what? (A: yes, it’s fucked up.) Also, he kidnaps one of the Yang sisters. For crying out loud is there no end to this fucker’s villainy. There’s only one thing a fifth Yang brother could do, that’s go save 8th sister and kill Pan Mei, but that sort of goes against the monks’ non-violent wishes. So his one family needs vengeance, his other family needs peace. He’s in a bind.

The final fight is one of the best ever. You got all kinds of guys with all kinds of pole type weapons (not sure what diagram number they all are) and 5 is taking them all on. And there’s a pyramid of coffins with guys in them and he has to hop up to the top and kick the lids around and step on some guys and pull out his sister, who’s all tied up and then gets lifted up by the ropes by about 8 guys with poles. The whole thing keeps escalating and then all the sudden all the monks jump out of nowhere and start fighting!

This is a one-two punch here, one of my favorite things in badass cinema which I have not yet coined a name for, but I first wrote about it in reference to MY FATHER IS A HERO starring a little kid and Jet Li. What it is is when the same scene is the action climax and the emotional climax. Action climax because you got a whole pack of monks in yellow robes knocking the bad guys’ teeth out with poles, emotional climax because the monks have unexpectedly changed their strict interpretation of religious law so that they can save the fifth Yang, showing how much they care about this crazy fucker who moved in with them against their will and bringing together the needs of his two families.

I would also like to make a special mention of the scene where Yang 5 has to fight a wooden wolf dummy. This is an incredible scene although I must admit it got me excited to see him fight a real wolf (which does not end up happening).

In addition to the wolf dummy this has everything you need in a great martial arts picture: huge, detailed fights, many different weapons used in impressive ways, a wide variety of fighting styles, beautiful sets and costumes, some philosophy, a little bit of gore and even a really dramatic score, somehow reminded me of CAPE FEAR a couple times. Most importantly this is the type of kung fu where you care about the story and characters and yet they don’t skimp on the fighting at all. And all in just over 90 minutes.

On VHS you might find it as INVINCIBLE POLE FIGHTER but if you can play the asian DVDs you MUST get the nice Shaw Brothers collection version which has the whole beautifully remastered/widescreen Shawscope package. If you seen any of those DVDs you know what I’m talking about. Americans never knew those movies looked so good when they first came out.

I’m still not sure what that great title means but I do know this: 8 DIAGRAM POLE FIGHTER is the best movie ever about diagrams and/or poles. It definitely runs rings around STICKFIGHTER and 8 IS ENOUGH, to put it mildly. HIGHLY recommended.

Gordon Liu Shaw Brothers
This entry was posted on Tuesday, June 7th, 2005 at 4:47 am and is filed under Martial Arts, Reviews. You can follow any responses to this entry through the RSS 2.0 feed. You can leave a response, or trackback from your own site.