HEROES OF THE EAST is a really top notch Shaw Brothers production that’s half all-time classic martial arts movie, half romantic comedy. There are cultural differences that separate it from a Katherine Heigl movie besides just martial arts, the main one being arranged marriage. In a Heigl picture she’s forced to be with a guy she initially hates because of a baby, here it’s because of powerful Chinese and Japanese business families trying to expand their reach by making their kids marry each other. 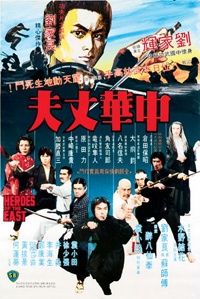 Gordon Liu is Ah To, the Chinese son. It’s a real different character from the monks he plays in 36TH CHAMBER OF SHAOLIN and 8-DIAGRAM POLE FIGHTER. He’s much more priveleged, he has servants, he has hair. And it’s the modern world, he wears a tie sometimes.

Anyway Kung Zi (Yuka Mizuno) is his Japanese bride, and there’s a little misunderstanding where his servant – I feel weird saying that, let’s call it his assistant – hears her behind closed doors practicing karate and thinks he’s beating her. Don’t worry, the assistant takes it seriously and reports it to Ah To’s father, which causes some embarrassment. But when the truth comes out it becomes a household battle between karate and kung fu, Japan and China. She keeps breaking everything in the backyard with her kicks and chops so they move her into the practice hall, but she has all the Chinese weapons moved out and replaced with Japanese ones.

At first I sided with the wife. The husband seems real uptight and sexist. He gets real upset about her boobs showing when she wears her gi. He also shows her a kung fu style for women to use so that their legs stay closed. It’s completely ridiculous, it looks like he has to piss real bad. So I felt like I understood why she was fighting with this guy and trying to piss him off. But then she just keeps pushing him and she starts to seem like she’s taking it too far and I go back to his side.

The argument escalates to sparring, next thing you know they’re throwing hidden knives and darts at each other to demonstrate the superiority of their respective nations’ traditional weaponry. It’s a funny kung fu WAR OF THE ROSES but the argument comes to a head when she brags about ninjitsu and he says of course Chinese people could use that type of trickery, but they don’t believe in it, they believe in honorable fights and think that ninja shit is only for “treacherous villains.”

And that point causes a serious bump in the marriage. Remember when your parents would fight and your mom would pack a suitcase and not say which motel she was going to? Kung Zi does the exact same thing as your mom, assuming your mom went back to Japan to complete her ninja training with a handsome ninja she’s likely to fall in love with because she grew up very close to him and he’s played by Yasuaki Kurata, the old Japanese master in that classic earn-each-other’s-respect fight in FIST OF LEGEND.

Of course this is when Ah To realizes how much he cares about her, so romantic comedy tradition dictates that he must perform some sort of trickery to deceive her into interacting with him so he can get her to love him again. Not necessarily pull a full-on Mrs. Doubtfire, but he’s gotta somehow lie to her so that he can straighten it out at the end, right? Well, his assistant has a good one: send her a challenge letter. Her pride will force her to come home for a duel and then he can say no baby, come on, I don’t really want to have a sword fight, we belong together, etc.

The only problem is she’s training with the five greatest masters of each major Japanese martial art, so they read the letter like What the fuck!? This guy thinks China is better than Japan? And he’s gonna prove it by beating up his wife? No fucking way. We’re going. So this letter that was supposed to win him his wife back instead forces him to fight five masters. That’s the second half of the movie: one fight per day until he beats them all. Kung Zi actually feels bad about it so she joins him as his interpreter as he tries to defeat them all.

The director is Chia-Liang Liu, who also did the aforementioned 36TH CHAMBER and 8-DIAGRAM, and like those it finds excuses for Gordon Liu to fight in a whole bunch of different styles and with a whole bunch of different weapons. He does get to use the 3-section staff again (against nunchakas – his opponent announces that H To wins because his weapon is longer). There’s a kitana vs. a Chinese double-edged long sword, there’s karate vs. drunken kung fu, etc.

Every one of the fights is great and different from the last. He’s supposed to be kind of pushing it, cramming to master each of the Chinese styles before each duel, but we know he’s Gordon Liu so we don’t believe he doesn’t already know it. But he has to use cunning (or trickery) in some of these things. One that seems like almost a cheat is when the Japanese grappler is kicking his ass but Ah To’s assistant lubes him up with peanut oil so the guy can’t get a grip on him. That trick is still used to this day though in mixed martial arts.

The sword fight is a classic, but I think my favorite is the climactic ninja duel. They use all the techniques: disguises, decoy dummies, padded clothing, throwing stars, sleeve arrows, back darts, throwing knives, smoke bombs, spiderhole, underwater stealth, spitting poison, faking death, and more.

Somebody recommended this one to me, I wasn’t sure if it was gonna be up my alley, but I absolutely loved it. You could say we were in an arranged marriage and fell in love. Okay, I can’t really relate to that part of the story in my culture. You know what Disney’s ALADDIN said about arranged marriage. It’s against it. Despite that the themes in the movie are universal. It’s about stubbornness in relationships between men and women, and between countries. They never stop and listen to each other, they’re so insistent on proving their own points. I know it has too many titles already, but another good one would be DUEL OF THE SHOW-OFFS. Because of their egos they’re not gonna just talk things out if it prevents them from busting out a couple more weapons and showing them off.

Because they refuse to be diplomatic they cause an international incident, and because they don’t take the time to learn each other’s customs they make it even worse. There’s a great turn of events where the samurai offers him his sword as a sign of respect but he doesn’t pick up on it at all and manages to completely insult him and make the masters even more pissed. His wife explains to him later that if he would’ve taken it he would’ve squashed the whole beef. No such luck.

But the thing is, Ah To & Kung Zi and Ah To & the masters obviously love showing each other their different techniques. They do a move or a style or pull out a weapon and they announce what it is, sometimes they offer a little explanation. In their minds they’re competing but in a sense they’re also doing show and tell. They’re sharing their cultures with each other, they just don’t realize it.

This is gonna be a SPOILINGS, but another reason why I love this movie is that it’s one of these stories where they angrily fight each other but end up accidentally bonding. There are plenty of kung fu movies, including classics like FIST OF FURY, that come across very nationalistic. This one shoots that kind of thinking down. Nobody kills each other and at the end they’re all friends. It’s a romantic, feel good, ass-kicking kung fu and karate masterpiece. SHAOLIN LOVES AND RESPECTS NINJA.

Gordon Liu ninjas Shaw Brothers Yasuaki Kurata
This entry was posted on Friday, November 12th, 2010 at 1:51 pm and is filed under Action, Martial Arts, Reviews, Romance. You can follow any responses to this entry through the RSS 2.0 feed. You can skip to the end and leave a response. Pinging is currently not allowed.

16 Responses to “Heroes of the East”