DIRTY HO is one of the comedic Shaw Brothers pictures. And yeah, I know, the title is funny. It sounds like it would be about, I don’t know, a Manchurian prince who has to get to a certain ceremony but one of his thirteen brothers is scheming to have him killed and meanwhile him and another guy named Ho keep playing dirty tricks on each other so that’s why he’s a Dirty Ho. That’s what it sounds like it would be about, but really the tricks are not dirty per se. In my opinion he’s a Sneaky Ho at worst. The movie should be called HE’S UP, HO’S DOWN.

The great Gordon Liu (36TH CHAMBER OF SHAOLIN, 8 DIAGRAM POLE FIGHTER, HEROES OF THE EAST, KILL BILL) plays the prince, “Mr. Wang,” while the fly-eating MAN FROM HONG KONG Jimmy Wang Yu Yue Wong plays Ho. When the story begins they’re both clients in some kind of opulent rich-people club, hanging out in the VIP rooms surrounded by gussied-up ladies, drinking wine, playing music, looking at bonsai trees and Ming Dynasty vases, throwing jewels and money orders around to impress the girls, having a good time. You know how we do. But then they notice each other and get jealous and there’s a dispute over who has one of the rooms reserved. Simply put, Ho wants the hoes in his, while Wang wonders wait, we won’t want women working wang without wanting to work Wang wang, will we? He hopes for hoes at home in his and not Ho’s. 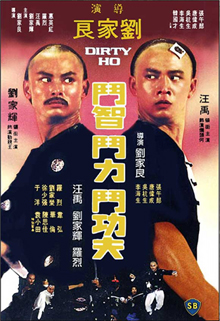 So it turns into one of those classic one-upsmanship duels. The rich pricks keep giving away more and more riches trying to top each other, and the hoes keep switching their allegiance back and forth until the cops show up and Wang wins through what Ho probly considers un-oneupsmanlike conduct, but I consider Bugs Bunny-like smarts. Ho is a jewel thief, but probly not a master jewel thief, so he is easily and constantly outsmarted by Wang throughout the movie.

After the ho incident they circle around each other as rivals for a while but then Ho gets a poisoned head wound and Wang knows the antidote and agrees to parcel it out only if he becomes Ho’s master. This is also how Eric B and Rakim first started working together, and Woody and Wesley.

Wang seems to have Ho on a leash, teaching him kung fu, but the prince is injured and can’t even stand up, so they sort of need each other. He pokes Ho with a wooden pole (8 diagram?) to show him what to do, and there’s training montages with Ho doing various kicks over layers of candles. It’s way more of a comedy than 36TH CHAMBER but them Shaw Brothers are kind enough to get some training scenes in there. They know we love training.

The fights aren’t as huge and impressive as, say 8 DIAGRAM, but they’re like Jackie Chan before Jackie Chan, a high number of clever high concept fights. Ho puppeteers a chambermaid to make it seem like she’s fighting (like RAGING PHOENIX), there’s a duel disguised as a wine-tasting, a duel disguised as an antiques viewing. To be honest I didn’t exactly understand why they were all trying to hide that they were fighting, even from Ho, but I’m sure they have their reasons. Dirty reasons.

There’s also a fight against dudes disguised as cripples (blind man, hunchback, one-armed man) and a fight with Wang actually crippled and Ho pushing his wheelchair. It’s almost like LONE WOLF AND CUB the way Ho pushes him around and does most of the fighting but Wang does what he can with his arms and pulling hidden weapons out of the chair.

DIRTY HO is not one of the top Shaw Brothers pictures I’ve seen, but it’s completely solid and especially good for those who enjoy them a little more light-hearted.

Gordon Liu Jimmy Wang Yu Lau Kar-Leung Shaw Brothers
This entry was posted on Sunday, November 6th, 2011 at 7:56 pm and is filed under Action, Martial Arts, Reviews. You can follow any responses to this entry through the RSS 2.0 feed. You can skip to the end and leave a response. Pinging is currently not allowed.