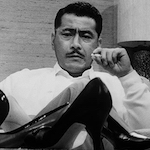 One thing I did not expect: themes of shoe industry integrity. It opens with our initial protagonist Mr. Gondo (Toshiro Mifune in a white cardigan) meeting at his house with his fellow board members for the National Shoe company. They’re each in charge of one specific part of the company (one guy conveniently lists them all off for us), and Gondo’s is the factory. All of them agree that “the old man,” (the president of the shoe company, not Dan Inosanto’s character from REDBELT) is out of touch with what modern women want. They call his pumps “combat boots.” But they’ve come up with a plan that by teaming together they represent a majority of shareholders and can replace the old man and begin making shoes that are more current and cheaper to manufacture.

Problem is they need Gondo to agree. He examines their prototype shoe, listens to their case, and tears it to pieces with his fingers. That was the intent – they need the shoes to wear out quickly so ladies will have to buy more of them. But Gondo has worked at this factory since his apprenticeship when he was 16 and takes pride in making durable shoes. Fuck you motherfuckers for proposing this bullshit in the man’s own living room. He makes his assistant Kawanishi (Tatsuya Mihashi, THE BURMESE HARP, CASSHERN) walk them out, won’t even do it himself. 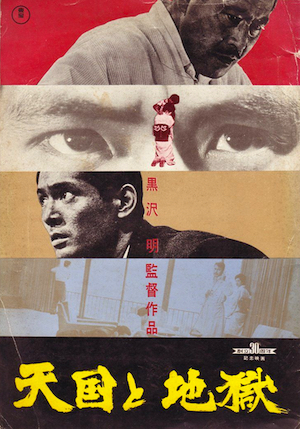 When you see Mifune in a movie, you automatically are in awe of him, and he’s standing up for something admirable, but he’s this rich shareholder guy, and he’s very sexist toward his wife (Kyoko Kagawa of MOTHRA). So I was definitely concerned this was headed in a FOUNTAINHEAD direction. But bear with it.

He has a different plan: push the old man out, make hipper shoes, but maintain the previous quality standards. The other dudes won’t stand for it, but that’s okay… he’s been secretly buying more stock than they realized, and has a deal about to go through that would give him a majority.

Then he gets a call. Somebody kidnapped his son Jun (Toshio Egi, The Space Giants). Says not to go to the police. Just pay the ransom. Oh fuck. That’s it. He’s gonna have to pay it. Gonna lose the deal. Gonna lose everything. He’d do anything to keep his boy safe.

Then his chauffeur Aoki (Yutaka Sada, THE MYSTERIANS, YOJIMBO, SANJURO) shows up to pick up his kid Shinichi (Masahiko Shimazu, FLOATING WEEDS), who was playing with Jun. And then Jun appears. So the kidnappers actually have Shinichi.

Here’s where things get real interesting. Gondo immediately calls the cops. Wasn’t gonna risk it when it was his kid, now all the sudden it’s okay. And when they get there they keep talking to Gondo while Aoki is standing right there. It’s a while before they even acknowledge him.

Gondo assumes since the kidnappers have the wrong kid they have no leverage, but when they realize it’s the wrong kid they don’t care, they’re still gonna kill him if Gondo doesn’t pay. So he would have to have it on his conscience. Foolproof. Except he tells them no.

The police record the call and play it back. Poor Aoki is on the edge of the frame, head bowed, listening as his boss says, “I absolutely will not pay!” Still clutching the shirt he brought for his son.

Later Aoki will beg Gondo to pay the ransom. Then he’ll accept his justification for not paying it. Everyone in the room hangs their head in discomfort as Aoki tries to say it’s fine, will probly be okay.

Eventually Gondo changes his mind, and everybody acts like he’s the world’s greatest hero for it. The goal is to get the kid back, then try to catch the culprits. When they explain their plan to hide some things in the money bag to help trace it, Gondo gets out his old tool kit and starts doing it himself, explaining that shoe factories used to make bags too. His handiness seems to win over the cops. One of them says, “I waste no love on the rich since I grew up poor. At first I despised him, but…”

Poor Aoki is also very invested in the investigation, feeling deeply indebted to Gondo. It seems like it might be a cultural thing that everybody worships him for doing the right thing, so I’m curious how it played out in the (uncredited?) American source material. The whole setup comes from King’s Ransom by Ed McBain, the tenth book in the 87th Precinct series, previously adapted into episode 21 of the 87th Precinct TV series. The rest obviously comes from the comic strip Hi & Lois by Mort Walker and Dik Browne.

The longest section of the movie is confined to Gondo’s sparsely decorated house, like a play. Usually the curtains are closed, but the kidnapper makes him open them – located on a hill, apparently he can be seen from far away. When the story finally moves down below there’s much more noise and dirt and bustle, and lots of great on-location photography.

Much like STRAY DOG, it gets detailed about the investigation: many detectives assigned different angles to look into and report back about, making a map of which parts of town could view the living room window with a telescope, which pay phones could’ve been used. They further narrow it down by identifying the sound of a trolley in the background of one of the calls (I think COOL AS ICE kinda borrowed this) and talking to someone who knows what type makes that particular sound, to triangulate the trolley lines that use that type and go through the part of town they’re looking at. And there’s a comment about heat on a call in the morning that causes them to investigate which pay phones would be hit by sun by that time of day.

Yeah, the hot weather isn’t as important as it is in STRAY DOG, but I noticed lots of sweat stained shirts, and it’s used as a class distinction – down here everybody sweats, looking up at the hill at the fuckin shoe company guy, who probly has air conditioning. That’s what the kidnapper says, anyway. When they’re hitting the streets looking for leads one of the cops looks up and says, “The kidnapper’s right. That house gets on your nerves. As if it’s looking down on us.”

It’s interesting to see an actor as commanding as Mifune start out as the main character, then disappear for long stretches in the second half, and have the movie still work. This is partly because we get to see a little more of these very appealing detective characters like Detective Tokura (Tatsuya Nakadai from SWORD OF DOOM and GOYOKIN) and his Laurence-Tierney-looking partner Bos’n (Kenjiro Ishiyama, KWAIDAN, ZATOICHI THE OUTLAW). And there’s great suspense as it slowly spirals in toward the culprit, the police figuring out who he is and trying to play it just right so they can arrest him for the crime that would put him away the longest. This was the first movie role for Tsutomu Yamazaki, who I did not recognize as the star of TAMPOPO. (He’s also in KAGEMUSHA and BLADE OF THE IMMORTAL).

If we’re pitting them against each other I guess I prefer STRAY DOG, mostly for the symbolism of the guy taking responsibility for anything don with his stolen gun. But this is another masterful one. You know how Kurosawa is.

Akira Kurosawa Ed McBain Kenjiro Ishiyama Kyoko Kagawa Tatsuya Mihashi Tatsuya Nakadai Toshiro Mifune Tsutomu Yamazaki Yutaka Sada
This entry was posted on Tuesday, May 12th, 2020 at 9:15 am and is filed under Crime, Reviews. You can follow any responses to this entry through the RSS 2.0 feed. You can skip to the end and leave a response. Pinging is currently not allowed.

13 Responses to “High and Low”