In the opening scene a family is gunned down by three hitmen. Only the mother survives, and just barely. Her father, just known as Costello (Johnny Hallyday), comes to the hospital, vows to avenge her and gets minor details about the attackers by having her point at words in a newspaper.

This Costello is amazing. Everybody calls him “the white guy,” but his features are so unusual I didn’t notice at first that his race was out of place in Macau. He looks like a detailed anime drawing of Edward James Olmos. He never smiles, barely talks, his eyes are eerily light, his face covered in valleys and streams, always wearing a tie and a trenchcoat. And at first we know nothing about him. But the implication is that she won’t be surprised he intends to avenge her. Is he a killer? A cop? A soldier? Or just a real spiteful civilian? How does he intend to find these assholes? 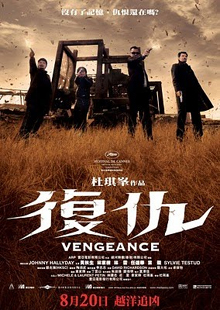 First he finds help in the form of a different three hitman team (Anthony Wong, Lam Suet and Lam Ka-Tung). He hears their silenced bullets going into a gangster’s cheating girl while he’s in the hotel hallway. He stands and stares down the three killers as they leave. He’s so intense they don’t kill him – and this probly earns his respect. The guys he’s after wouldn’t even let little kid witnesses go. These guys let an old white man go (although they regret it by the time they’re in the car).

Through some clever tricks Costello tracks the team down and gives them his money, his watch, and his restaurant. They go to the daughter’s house to examine the scene of the crime, using superhuman hitman insights the way Vin Diesel did his car whispering investigating an accident scene in FAST AND FURIOUS. Then they go looking for the killers.

This is an A+ film of Badass Cinema, with top shelf examples of many of the most important badass elements: stoicism, honor, brotherhood, unspoken respect, grimacing tough guy faces, slow motion strutting, and of course the titular noun. Spoken mostly in English, with a Hong Kong director and French co-producers it has a great sort of international feel, paying tribute to Jean-Pierre Melville and John Woo and John Woo’s tribute to Jean-Pierre Melville, with absolutely gorgeous modern cinematographicism. (Because of the colors and lighting in this movie and the lines on Hallyday’s face I recommend the blu-ray if you have access to it.)

The script is subtly brilliant. Costello’s backstory is pretty simple, but we learn it piece by piece and have to put it all together ourselves. Eventually we understand his odd ritual of taking Polaroids and writing on them with Sharpie, and once we understand that we also understand more about the circumstances around his badass juxtaposition (he’s an excellent chef), and this even tells us something about his relationship with his daughter, since she was also a good cook in the opening scene. (Food is a theme in the movie, actually – the idea of bonding by cooking for someone or eating together, and the idea of rejecting somebody by refusing their food.)

The highlight of the movie is Costello’s bond with these three killers. These guys are all so cool and they speak so few words. Lam Suet as Fat Lok brings some comic relief with his fondness for food, but he’s probly the toughest. They’re cold-blooded killers, they don’t show emotion, but I think they have at least a little compassion for Costello and his situation. There’s a point where they could easily get out of this thing, but they choose to stay loyal to Costello to their own possible doom. It seems to be a matter of professionalism, but I think they also want to seem him win this one.

The violence in the movie is beautiful, taking place in atmospheric locations that feel almost otherworldly: the woods where leaves are always dropping, or the dump where garbage is always blowing around. But honestly the shootouts aren’t the exciting parts in this one. My favorite parts are the stare-downs, like when Costello sees the hitmen leaving the hotel, or especially the scene at the campground where the two groups walk toward each other. In this world killers know killers, they have killdar. And they’d rather warn each other off with facial expressions than upset their kids by shooting in front of them. Nobody ever gets scared or tries to get away or insults each other. It’s more like a poker game. (Not celebrity. Regular.) Everybody knows what’s going on here. Nobody has to say anything.

I know a couple of my readers have a kneejerk hatred of slow motion. VENGEANCE is a good argument for it. It’s not very extreme, usually just a little slowed down. But here’s a movie where the anticipation and the tension is the best quality, so why not give us more bang for our buck? It also gives us better eyesight. We can see every subtlety of their badass staredowns that we’d miss at regular speed. Slo-mo gives us super powers.

At first I thought the name “Costello” was an obvious reference, but then I couldn’t figure out who would be Laurel. If his name was Laurel and Lam Suet was called Costello that would make sense. But there really is no fat guy/skinny guy type team in this movie. Therefore I can only make a guess that there is a very small possiblity that it could be a reference to LE SAMOURAI, which also has a stoic French trenchcoat-wearing hitman protagonist named Costello. I don’t know if you’re supposed to read that as just an homage or as a hint that this is the further adventures of Le Samourai. That Jef Costello survived somehow but got hit in the brain so he decided to retire from the game and open a restaurant. Johnnie To even had Alain Delon set to do the role but when he met with him and showed him the outline Delon changed his mind.

That’s okay, Hallyday is even better. It’s like how Warren Beatty was gonna play Bill in KILL BILL. Interesting, but it worked out for the best. Hallyday’s been in some other movies, but it turns out he’s mainly known as the French Elvis Presley. I don’t know, maybe the movie seems silly to French people because of that, but to the rest of us he sure has an interesting face to stare at.

VENGEANCE is a movie that somehow delivers on the catharsis of revenge while completely dismantling the logic of it. Usually a revenge movie has to really rub it in, make us hate the creep that’s gonna get it, make us thirst for his cool refreshing blood. It’s easy to hate these hitmen and their boss based on the crime, but the more you learn the weaker the case against them. The only real difference between the bad guys and the good guys is that the good guys leave witnesses alive sometimes. They’re still hitmen, and so was Costello it turns out, and I figure he probly still would be if he hadn’t been shot in the brain.

The boss who is the main target of vengeance, George Fung (Simon Yam), doesn’t seem all that evil either. He has a debatable “just how evil is he?” scene with his girl at the beginning (debatable because he has a legitimate reason to be angry at her), but the crime that’s being avenged was done to defend himself from someone that planned to turn him in. Bad, but not that bad by industry standards, you gotta admit. It’s a fact of life in the business they work in. It’s not some senseless crime you can’t make sense of, it’s just how it is in this world.

During the conflict Fung behaves professional, even friendly, calling up our hitmen to politely ask if there’s any way to work this out. When they say no he doesn’t threaten them or throw a fit and say “I treated you like a son!” or any of that shit. It’s more like they just put in their 2 weeks notice and he knows it’s probly hopeless but he has to ask because they’re good employees and he wishes he could convince them to stay.

When he sends an army of thugs after them he watches the battle and he can’t stop laughing. To me it seems like it’s because he’s a fan, he can’t help but enjoy watching those three work. Pretty harsh to his current employees, but it’s so much more original and interesting than the usual thing where the boss gets all pissed that his guys are getting mowed down. This boss loves it. He’s a sportsman.

But the best trick in this movie I gotta do a SPOILER to discuss. So here it is. For reasons I won’t get into Costello ends up losing his memory. He doesn’t remember his daughter anymore, he doesn’t remember what happened, doesn’t even remember what “revenge” means. So what purpose does his revenge even have anymore? Usually you can say it won’t bring his loved ones back, here you can say it won’t even get him any satisfaction at all, because he doesn’t remember what happened. But to these people it doesn’t matter. They live by a series of rules. The machine has been turned on, it’s too late to turn it off. They’ve been hired, they made a promise, they’ve turned on their boss, they know what Costello wanted, they’re invested in it. They’re protective of him, they even leave him instructions what to do in case they fail and he has to do it without them. Doesn’t matter if there’s any sense to it. They’re gonna get the vengeance.

And so are you. Everybody go rent VENGEANCE, please.

Anthony Wong hitman Johnnie To Johnny Hallyday Lam Ka-Tung Lam Suet revenge Simon Yam
This entry was posted on Monday, February 7th, 2011 at 1:22 am and is filed under Action, Crime, Reviews. You can follow any responses to this entry through the RSS 2.0 feed. You can skip to the end and leave a response. Pinging is currently not allowed.