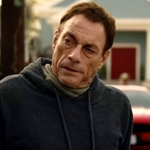 Lucas narrates at the beginning as he rides around on his bike, dropping off large quantities of drugs like it’s his paper route. He explains that he works for “the most feared badass in DC,” Rincon (David Castaneda, also in DAY OF THE SOLDADO), who’s introduced threatening some dude who his guys dragged to him in his underwear, tied behind a motorcycle. Rincon manages to be kind of handsome and charismatic despite the crap tattooed all over his face. (I guess he’s allowed to have hair and the M and S aren’t gigantic like Li’l Mago’s in SIN NOMBRE.)

Van Damme plays Daniel, one of Lucas’s customers. Daniel works at an auto body shop, he can’t talk because of a throat injury, he’s addicted to oxycodone, and he distributes drugs to other people he knows. He and Lucas seem to like each other, enough that Lucas carries a copy of A Tale of Two Cities he promised him he’d read. I know it’s a cliche now for these characters to loan out classic literature with some thematic connection to the larger story they’re in, but if it’s good enough for Ghost Dog it’s good enough for me. 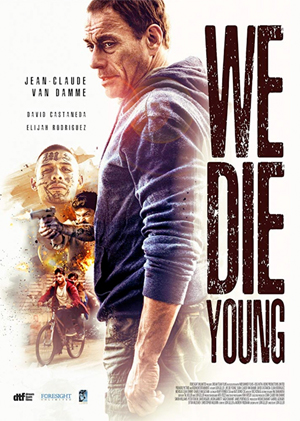 If you’ve seen my reviews of 21st century Van Damme movies like JCVD, ENEMIES CLOSER, KICKBOXER: VENGEANCE and KICKBOXER: RETALIATION you know I’m of the opinion that Van Damme has unexpectedly become a strong and interesting actor late in his career. So it’s not faint praise when I say this is one of his best performances. He’s forced to communicate more than ever with those tired, sad eyes (though he also gestures and types messages into his phone).

I like the way the movie separately introduces various characters around the neighborhood before showing them intersect. Eventually when some shit goes down we know three different factions of people who happen to be standing around in the background. It’s a tinge more DO THE RIGHT THING than you expect in a Van Damme picture. We meet Lucas’s wannabe gangster neighbor kid (he kinda reminds me of that asshole in FRESH who’s always talking about The Punisher) before we see him with a group of adults harassing Daniel, taunting him about being a junkie.

Lucas’s little brother Miguel (Nicholas Sean Johnny, Barry) also wants to be a gangster, which terrifies Lucas. I think some of this is too corny and heavy-handed, like when he drags the kid into his classroom as he squeaks “Fuck school! I want to be a gangster!” He has all the little boy and none of the menace of SIN NOMBRE’s Smiley. But it’s very effective when Lucas lectures him, “It’s too late for me, but you’re smart!” because it’s so sad a kid already believe his life path is set in stone. I tried to look up his age and supposedly he’s 26, but I took him for about ten years younger than that. Either way, it’s sad.

I thought this might be kind of like Olivier Gruner’s L.A. gang movie ANGEL TOWN, but it’s definitely aiming more for SIN NOMBRE – a serious look at this gang, the ability for people who do horrendous things to also be loving family members, how kids are seduced by the power of their lifestyle and/or pressured into it, how it’s hard even for nice people to escape it. It’s a movie with compassion for humanity, including the junkie characters like Van Damme’s. There’s another guy who’s just the nice grey-haired man who runs the grocery store, and he’s in debt to Lucas. There’s nothing shifty about him. He’s one of the nice people of the neighborhood, he just has problems with drugs and money.

There’s a scene where Daniel listens to the rambling thoughts of a twitchy friend, then gives him a little money, and the guy says “Semper Fi.” Ah ha. That’s our first confirmation of Daniel’s military past, before we start seeing the PTSD flashes. Normally that background would be there to establish that he can fight. And maybe it explains why Daniel seems to know a thing or two about first aid, and aggressive driving, and is comfortable carrying a machete. But the action is generally the lesser part of the movie. After so many scenes with confident steadicam long takes the action bits tend to get shaky and chaotically edited. But they’re short anyway, and it doesn’t matter too much. That’s not what this one is about. Opening with the car chase especially kind of seems like a concession to JCVD fandom (including myself) that we could’ve survived without. Honestly, Daniel’s ex-military status is more thematic than a promise of violence.

Lucas resorts to the gang to support his brother because he doesn’t think he can get out of the neighborhood. We see other kids tempted by military recruiters, and learn that Lucas had an older brother who tried that route to get out, but died fighting in Afghanistan. Daniel’s time in the military seems to be what put him in the neighborhood. When he’s decided to go after the gang for something they’ve done, his cool girlfriend (Joana Metrass, THE MAN FROM U.N.C.L.E.) is disgusted at the stupidity of it. “Soldiers. Maras,” she says. “Stupid-ass boys doing stupid-ass things.”

The movie humanizes Rincon because through most of the running time he’s at a house with his normal non-tattoo-faced family, throwing a wedding for his nice sister (Kerry Bennett). I even kind of sympathized with him when his shitty drug connect Spider (Uriel Emil, 6 BULLETS) showed up at the wedding (not even dressed up) and made himself at home. Meanwhile his shitty cousin/underling Jester (Charlie MacGechan) is the one clashing with Lucas, who tries to run off with Miguel and a couple of Rincon’s bricks after they jump Miguel into the gang.

It’s disturbing to see a bunch of adults stomp on this little boy, but the scene feels gentle and tame compared to the one in SIN NOMBRE. He still doesn’t take it as well as the kid in SIN NOMBRE, and doesn’t stay as loyal to the gang. I think they lose his heart and mind when they threaten to shoot his yappy little dog.

As in DAY OF THE SOLDADO, Rodriguez is very good at non-verbally conveying a sense of a young guy in over his head, trying to tough it out, puff his chest out and at least fake the “heart like stone” that Rincon wants him to have. Also it was probly a good idea for the actor to spend this time training with Van Damme to be ready in case they make SICARIO 3.

Exaggerated gangs are a staple of the action genre, with notable examples including THE WARRIORS, DEATH WISH 3 and DEATH SENTENCE. Compared to those, or really to almost any movie where a martial artist faces off against gangs, this feels like a documentary. But it’s touchier when you’re portraying a real gang whose existence has been brazenly and garishly exploited by fear-mongering anti-immigration hardliners and con artists. So I thought it was worth researching whether there are really neighborhoods in DC “run” by MS-13. From what I read they are a problem in the area, and this 2017 article claims there are more than 5,000 members in Northern Virginia, which seems like even more than in the movie. It also says they were involved in 3 murders that year in Virginia.

That’s terrible, obviously, but compared to what we see in WE DIE YOUNG, not too bad! I think they kill more people than that in this one day in this one neighborhood in this movie. So I know there are a couple people out there who hate it when I do this, but I feel it is my duty as a person who believes in both action movies and the dignity of humankind to note, just as I did with DAY OF THE SOLDADO and PEPPERMINT, that it’s a bummer to see so many movies help the asshole in chief fill our heads with the exact paranoid scenarios he wants us to go to bed sweating about every night to help him get away with his get-rich-quick schemes on the backs of the poor and the not-white. I wonder if there will be as many of these as there were anti-commie action movies in the ’80s? And will they seem as comical in retrospect?

That said, this one is obviously sympathetic toward the real people involved (I think the hero is supposed to be a so-called “illegal,” right?) and not just using them as easy villains. It also points out that the gang problem has been exacerbated by what we know outside of the movie is Trump policy: Lucas says people in the neighborhood hate the gang but won’t talk to the cops about them because they’re “scared shitless of getting deported.”

The director and writer (sharing story credit with Andrew Friedman) is Lior Geller. This is his first narrative feature, but he’s done a few TV shows and the Emmy-nominated 2008 documentary THE HEART OF JENIN. This is a pretty well made gang drama, but not the best or most original. I just reviewed SIN NOMBRE yesterday, and obviously that’s the better young-people-trying-to-escape-MS-13 movie. Also I’m not convinced that this is better than if they had just sold out and made it into more of the action movie that the name and face on the cover implies. But if you, like me, are a fan of Van Damme’s acting even when he’s (unfortunately) not kicking, WE DIE YOUNG is an important one.

David Castaneda Elijah Rodriguez gangs Jean-Claude Van Damme Joana Metrass MS-13
This entry was posted on Thursday, April 11th, 2019 at 1:22 pm and is filed under Crime, Drama, Reviews. You can follow any responses to this entry through the RSS 2.0 feed. You can skip to the end and leave a response. Pinging is currently not allowed.

4 Responses to “We Die Young”