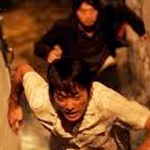 He pushes around his assistant/flyer distributor Oh-jot (Koo Bon-woong) and calls him Meat Head. He calls and hectors his prostitute Mi-jin (Seo Young-hee, BEDEVILLED) into working even though she’s horrendously sick. He keeps prioritizing business over people.

Even when he realizes these prostitutes aren’t running from him he remains in denial, still talking about them like they’re a commodity, stubbornly insisting that this creepo john is selling them. He even says this after the movie has revealed to us that I was right about that opening scene, that this is a serial killer. 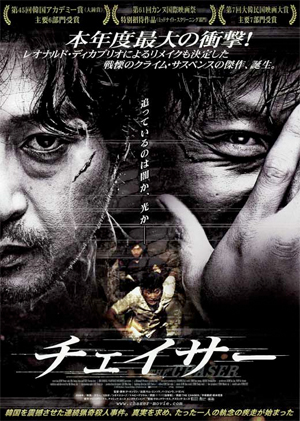 I was right about another thing: Joong-ho is a detective. Or was. A former cop, apparently kicked off for corruption, which he claims was not above and beyond that of the other guys still on the force. Anyway he opens an amateur investigation into the missing women, narrowing down the phone number of the john that was with all of them, figuring out just too late that that’s who he sent Mi-jin to, trying to get the location out of her, but she loses reception. This is a terrifying scene as he lets her use the bathroom and she notices rings on the wall for chaining shackles to.

An unexpected development: Joong-ho actually finds the guy, Yeong-min (Ha Jung-woo, THE HANDMAIDEN) pretty quick and catches him. It’s almost like a Marcellus-running-into-Butch moment where he sees him driving and can’t believe his luck. Trouble is he can’t get him to reveal where he took Mi-jin, and the cops don’t think they have the evidence to keep him for long. They suspected him once before and couldn’t prove anything that time either. They keep him around as long as they can (just handcuffed in an office!), everybody rushing around to find something before they have to let him walk.

All this is happening against the backdrop of an incident where cops were supposed to be guarding the mayor but failed to stop a guy from running up and tossing a wad of shit right in his face. Way worse than a pie, in my opinion. The media obsesses over the incident, totally missing the story of this serial killer sitting here not charged with a crime. More significantly, the bosses are terrified of another public embarrassment, and that causes them to be timid. They got a pretty good idea they’re not violating the civil rights of an innocent guy, but still, if they play this wrong they could lose him altogether. They know how Freddy Krueger didn’t have his rights read to him and they had to let him go and then the parents set him on fire but he made a deal with dream demons and the rest is history.

Anyway I appreciate that the bureaucrats in this movie are wrong without seeming like complete assholes. You get why they’re scared to fuck this up.

At the beginning I was a little worried that I wasn’t gonna be able to care very much for a guy involved in the pimping industry. As it went along though I found myself more sympathetic toward him. He goes from total asshole to unlikely good guy, begrudgingly forming a temporary guardian relationship with Mi-jin’s daughter Eun-ji (Kim Yoo-jung, SYMPATHY FOR LADY VENGEANCE) and clearly feeling tremendous guilt about getting her into this mess.

And Yeong-min is a good character to root against. He’s a supervillain in the sense that he arrogantly pulls off these horrible crimes, but he also has a pathetic humanity to him that makes him feel more real. He doesn’t seem badass, he’s kind of a dork. In his bloody pit of horrors he tends to sit around in his underwear. He’s horrifically cruel to women but scared when confronted by men, and angry when a female cop has power over him. He has humiliating sexual hangups that lead to the despicable sadism, and officers are able to push that button once they figure it out.

Recently I asked for recommendations for 21st century action movies and multiple people suggested THE CHASER. Personally I wouldn’t categorize it as an action movie, but it does have some foot chases and a brutally unglorified knock down drag out. There’s also a great moment when Joong-ho is caught lying about being a cop and the guy he’s questioning stands up out of his desk to reveal that he’s a giant. Joong-ho turns away like he’s gonna get the fuck out of there, but suddenly he spins back and bashes the guy on the head with a metal chair. Excellent feint.

And actually I gotta hand it to one other sequence where the police have to arrest Joong-ho for beating the shit out of the suspect, potentially destroying their case. He’s openly working on the investigation at the time, there are officers everywhere, and they’re friendly with him since they’re former colleagues. They don’t expect him to put up a fight. He uses that to his advantage, scrambling his way through a bunch of guys and scurrying out of there. It’s not a one-badass-guy-taking-on-all-comers type fight, it’s more of a realistic, awkward scuffle with the officers all having a “come on man, don’t make us do this” kind of attitude about it.

People had already recommended this to me whenever I mentioned how much I loved I SAW THE DEVIL. They’re both South Korean movies from around the same time with a badass guy chasing after a serial killer and fighting dirty, but they’re very different from each other. I SAW THE DEVIL is way more action oriented, but also gorier and visually and tonally much darker. To me this one feels comparatively tame, but (MAJOR THOUGH NON-SPECIFIC SPOILERS) man does it really South-Korean-cinema us in the balls toward the end when it uses every film technique in the book to tell us don’t worry, there is some suspense here but our boy is gonna get there in time and he’s gonna save the day and then whoops did I say it was fine no it is definitely, definitely not even remotely fine my friend life is shit.And then what happens is equally upsetting on a “oh, that poor lady, I liked her” level and a “I think I might throw up” level. Real mean. They know what they’re doing over there with these fucked up movies. They know how to get us.

THE CHASER’s villain is a horrible misogynist, and its reality is a man’s, man’s, man’s world and not a good place for a woman or a girl. Even our hero is selling women for sex, the very sympathetic female lead is a victimized sex worker, the police department is male dominated. I think the director sees this for the nightmare it is, and leaves us young Eun-ji as a reason for men like Joong-ho to wake the fuck up and try to make the world a better place by looking at the man in the mirror, etc.

I didn’t even realize until afterwards that director Hong-jin Na is the guy who did THE WAILING. This was his first feature, followed by THE YELLOW SEA.

Important historical note: although THE CHASER was a big hit in South Korea, it opened in second place to JUMPER starring Hayden Christensen.

Ha Jung-woo Hong-jin Na Kim Yoon-seok Korean cinema pimp Seo Young-hee serial killer
This entry was posted on Wednesday, April 12th, 2017 at 9:29 am and is filed under Crime, Horror, Reviews, Thriller. You can follow any responses to this entry through the RSS 2.0 feed. You can skip to the end and leave a response. Pinging is currently not allowed.

11 Responses to “The Chaser”