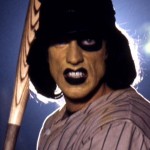 I gotta be honest. As good as THE WARRIORS is it’s not quite the amazing masterpiece I like to remember it as. What makes it good is mostly on the surface: the different gangs and their gimmicks, the bleak rawness of everything from the cinematography to the John Carpenter-ish analog keyboard music, and the dead seriousness of all the characters in the face of this exaggerated world where thugs patrol the streets in baseball uniforms and gangs seem to outnumber law abiding citizens by a thousand to one.

This is all more than enough to make it some kind of minor classic, but my memory was being pretty charitable to the storytelling. I always loved the mythological simplicity of it: Cyrus calls a meeting to try to unite all the gangs, some prick assassinates Cyrus and blames The Warriors, now these 9 guys have to cross New York on foot to get back home before the other gangs kill them. It’s a good old fashioned odyssey or a guantlet or whatever. 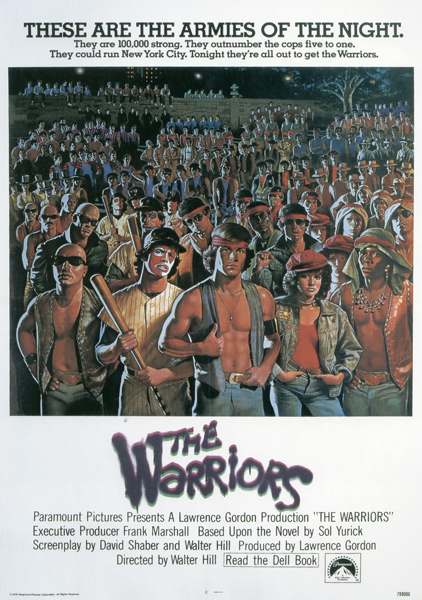 But watching it this time I don’t think Walter Hill keeps the momentum of that journey from point A to point B. Or the simplicity. He splits up the group. They don’t even realize at first that everyone’s after them. And half of them keeping getting distracted by the eternal search for pussy. This is pretty funny when they try to hook up with the girl gang called the Lizzies and they don’t seem to notice the obvious fact that the Lizzies are not, you know, into guys. If only that homophobic prick Ajax was there, he calls everybody “faggot” all the time so maybe he would’ve picked up on it. Anyway, there’s some meandering, it doesn’t really build like it could, when they get to the beach on Coney Island to face off with their enemies maybe you should feel more like they’ve been through Hell and back.

But I’m kind of nitpicking. I like the whole tone of this movie. Everybody looks so serious all the time. Warriors rarely smile. They’re macho like Spartans, they have a code they stick to stubbornly. Like the scene where they have to go through Orphan turf but there’s a whole political negotiation first. And it’s decided that all they have to do is take off their vests, they can’t go through in uniform. But they refuse. They’d rather fight and maybe die than take off their colors. It’s not clear if they’d be allowed to just turn them inside out like they made kids do with their Spuds Mackenzie shirts in the ’80s. And if it had been the Baseball Furies or the mime gang would they have had to clean off their face paint?

One of my favorite touches is the DJ played by Lynn Thigpen, only seen as a pair of lips talking into a microphone. She’s in cahoots with the Riffs so she dedicates records as coded messages to the gangs about the mission to kill The Warriors. For example she plays “Nowhere to Run, Nowhere to Hide” at the beginning. She plays alot of white rock music, I guess in deference to the multi-culti makeup of the gang. Unfortunately there was no song called “Sorry We Fucked Up and Had Everybody Trying To Kill You (Tonight)” so she had to play something a little less direct at the end, I’m not sure what it’s called.

That’s probaly why the government is always worried about terrorist suspects sending coded messages through the media – they’ve seen THE WARRIORS.

The Warriors are anti-heroes. They’re not good people and they’re not any more heroic than most of the other gangs. But you can side with them because of the odds against them. You can tell it’s hard out there for a Warrior. Watching the movie again I realized my life these days is really nothing like the Warriors, for example I generally wear a shirt. But I think all of us can find some part of our life to relate to their predicament.

Let me tell you a story. This has very little to do with THE WARRIORS but it will be cathartic to write it, so bear with me. Right after I watched the movie I went across the street because I had to mail a bill I’m late on. I live in an apartment building but I have to move out pretty soon because it got bought out by some asshole company that’s “renovating” the apartments and jacking up the rent, pricing us all out. So there are always these young rich couples moving in. As I was coming back in the building I saw this couple having trouble carrying a dresser up the stairs. For some reason the man was at the top and the woman was on the bottom and I felt like I would be an asshole just to walk past them. So I asked if they needed help.

“Would you really do that?” the woman asked gratefully. So I helped her lift her end, which was empty and not as heavy as I thought it was gonna be. But suddenly there was a loud metal clang as a bunjie corded hand truck fell from beneath the dresser, the tape they had across the drawers gave, some of the drawers fell open and my fingers got crushed between I don’t know what.

My first thought was to apologize, but I didn’t because my second thought was why the fuck are these people carrying a dresser with the drawers still in and facing down and then being surprised when they fall open? I thought they were just carrying a dresser up the stairs like a normal person would do, it didn’t occur to me they would be trying some weird scheme where you roll a dollie up some stairs so you don’t have to take the drawers out. So maybe I should’ve been looking closer, but I feel that those sorts of carts are durable enough to take a fall and nobody should be crying about it.

I dislodged my fingers, we pushed the drawers in, turned the chest sideways and the woman angrily thanked God that nothing was damaged. The guy said “You can set it down.” I was ready to go but I thought maybe he needed to rest.

I stood to the side for an excruciating half minute or so as they stared me down and I realized that they were blaming me for this incident. I was ready to carry the damn thing to wherever they needed it, it would only take a couple minutes, I could probaly do it by myself if they’re gonna just stand there. But “It’s okay, you don’t have to help” he said impatiently. “We’ll figure something out.”

“I can help, it’s not a problem, but–” I trailed off as I realized what he meant was they were waiting for me to leave.

I ducked into my apartment in disbelief and undeserved shame. What the fuck? They didn’t even get it into the building, they weren’t allowing me to help. A total stranger trying to help some yuppies move into the same building he has to move out of because he doesn’t make as much money as they do. And I really like this place too, I wish I could stay. Even if it had been my fault – and even if harm of some kind had been done – sure, it would be awkward, you don’t have to say “thank you,” but show some fuckin manners. Don’t put it on the good Samaritan. At worst I am a well-intentioned Samaritan. But at least in Samaria we take the damn drawers out before hauling the shit up the stairs.

Man, that bummed me out, put a wicked hex on my whole night, even though I had just watched THE WARRIORS! Thanks alot. Welcome, neighbor. I hope you enjoy paying $500 more than I did. Just so you know – they got rid of the on-site manager when they bought the building. Last month some drunk puked right there where you won’t let me move your dresser from. Nobody cleaned it up, we just waited for it to rain. True story.

At first I thought damn, that was a Larry David moment right there. But then I realized no, that was like THE WARRIORS. Blamed for a crime I didn’t commit. And blamed by the people who actually did it. We’ve all been in that position of having the hammer come down on us and we didn’t even do anything. That’s why I am a Warrior. And you too are a Warrior. We all are Warriors. Except personally I am against “runnin a train” on some lady, I don’t know about you guys but that seems pretty wrong to me. Otherwise I am a Warrior. The Baseball Furies are also pretty good although it would be a pain in the ass putting on all that face paint. So I am a Warrior. And I will come out and play.

NOTE: This review is based on the original DVD release of THE WARRIORS. I made a point not to watch the director’s cut special edition, where Walter Hill went back and added cheesy comic book frames as transitions.

James Remar Walter Hill
This entry was posted on Friday, August 24th, 2007 at 3:07 pm and is filed under Action, Crime, Reviews, Thriller. You can follow any responses to this entry through the RSS 2.0 feed. You can skip to the end and leave a response. Pinging is currently not allowed.

14 Responses to “The Warriors”