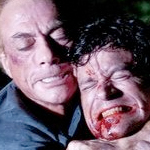 Scott plays Henry, an ex-Navy SEAL trying to figure out his post-war life while working as the ranger of a state park that’s an isolated island with only one other person, an old man, living on it. This is a recipe for having to fight with a couple of bears over pic-a-nic baskets, but he lucks out and all he has to deal with is being in the way when a small plane smuggling “a load of some very naughty shit” crashes in the water nearby and a ruthless gang of killers come looking for it. I mean, it’s a pain in the ass, but it’s more within his skill set. 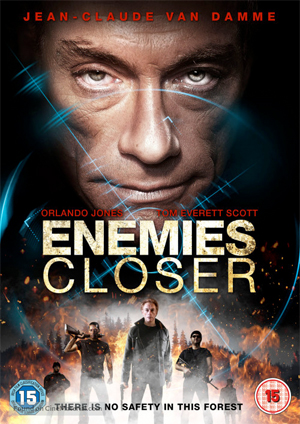 We’ve seen some suspicious people on the island. A guy we later learn is called Clay (Orlando Jones, FROM DUSK TILL DAWN 3: HANGMAN’S DAUGHTER) has been sneaking around, spying on Henry. The first twist is that Clay is not with the bad guys. He’s his own separate bad guy, somebody who blames Henry for his brother’s death in the war, and has come to kill him. Scott shows a good mix of sympathy for the grieving man, guilt over not saving his brother, and confidence that he can explain the misunderstanding. And of course they have to form a tenuous partnership when they both end up in the crosshairs of this drug gang.

Early in the day Henry helps an injured hiker, Kayla (Linzey Cocker). They have a good flirtatious chemistry and as she canoes off the island she convinces this recluse to come meet her for dinner that night. So while some of this is going on there’s a “shit, I was gonna have that date” disappointment hanging over him. The script by Eric and James Bromberg is routine but effective, weaving in all the necessary dramatic variations on the simple standoff: the titleistical pairing of rivals, a confrontation with the old man on the island that turns into a western-style siege, Kayla coming to look for him, dealing with his trauma about what happened in the war and what he’s going to do with his life now, etc. And the bad guys have a good reason to keep this SEAL alive: he kills their diver, who was gonna pull the drugs out of the water for them.

Technically this is not a Van Damme vehicle, this is a Tom Everett Scott vehicle. He brings a really appealing rugged nice guy quality to the role that you wouldn’t get from most straight up action stars. But let’s call out the elephant in the room: we’d still rather see a guy who can do a flying kick. Having an actor like Scott as the lead instead of a martial artist means the fights (choreographer: Borislav Iliev, LONDON HAS FALLEN, EL GRINGO) involve alot of stunt doubles punching and wrestling in silhouette. On the other hand, having Van Damme as the villain, Xander, balances things out, because he’s doing kicks and acrobatics that are not normally provided by a Rickman, a Boothe or a Bogosian type villain. More importantly, Van Damme’s unusual acting performance makes up for any action deficiencies, and turns a decent movie into a special one.

The introduction of Xander alone surpasses some of the later DTV Van Damme movies in my opinion. A guy claiming to be a Canadian officer (Zahary Baharov, COMMAND PERFORMANCE) shows up at an American police outpost on the U.S. side of the border, offering to assist them in finding the crashed plane. The Americans tell him he’s out of his jurisdiction, makes fun of him for riding a horse and tells him to “giddyup.”

So he goes outside to his squad and its leader, Xander, who sighs, tells them to block the exits, goes in and closes the door behind him.

“Hey, what the fuck, Frenchie?”

His first English lines in the movie are, “Do I look funny to you? Is it my shoes? You see, I don’t wear leather. I’m a vegan. It’s for the environment. I’m helping the planet.” He goes on to lecture these incredulous cops about the environmental consequences of the meat industry, making them laugh. It’s an uncomfortable, threatening intrusion that’s a little bit eggplant speech in TRUE ROMANCE, a little bit Chop Top touring the radio station in TEXAS CHAINSAW MASSACRE 2. He weirds them out, then single-handedly murders all of them. He bashes a guy with a phone, breaks a CD in half and slits a guy’s throat with it. Viva physical media. When his right hand man comes in to save him from the last guy, who has him in a chokehold, he says, “He’s the one that needs help. He just doesn’t know it yet.” And he is correct.

What I have neglected to mention so far is that he does all this while disguised as a mountie and with a puffy, clownish hairdo. But he doesn’t mug, he doesn’t have that embarrassing trying-to-be-funny vibe you might expect. He just plays it like he’s kind of an odd, eccentric guy and can’t help being himself. He has a big heart for the planet and a cold rock for humans. At times it makes him very funny, but I also think he’s pretty scary. There’s a certain Anton Chighur in that opening, where he terrorizes them while looking ridiculous, inviting them to laugh at him so he can headbutt them while they’re distracted. 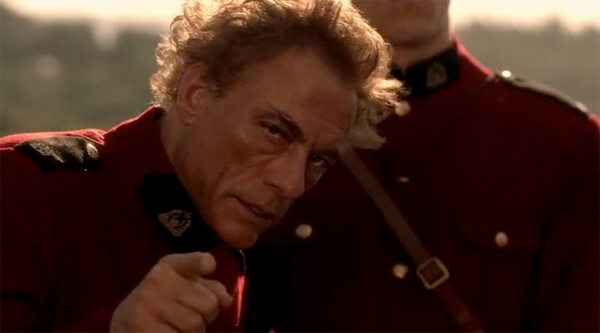 He does have punchlines, though, like when he says “I hate guns” right after organically leg-choking a guy to death.

Throughout the movie he keeps doing odd things. You watch as much to see what he’ll do next as to root for Henry to get away. Xander kills a guy in the woods, then pauses to pick a strawberry and talk to it. “I wasn’t aware you grew in this park.” He kills a guy for littering. He worries about guns being bad for the environment. He tells a sad story about his grandmother slaughtering a goose he loved. Occasionally he gets to do big, insane smiles worthy of Nic Cage as Castor Troy. He’s having so much fun, and it’s contagious. 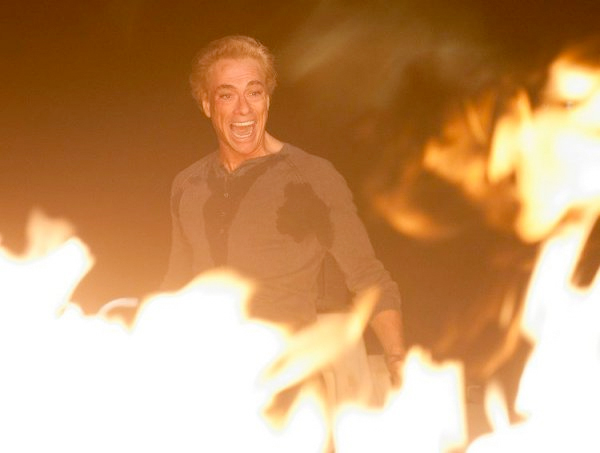 Martial artists, like all athletes, have to face the deterioration of their bodies as they age. So it’s often said of action stars like, say, Jackie Chan, that they must make different types of movies as they get older and can no longer physically match what they did in their heyday. Western asskickers like Eastwood, Stallone and Schwarzenegger have found ways to address and take advantage of their age. But of the martial artists I don’t know a better example than Van Damme of one who has dealt with a slowing body by strengthening his acting. This Xander character shows brilliant comic chops that Van Damme really, really didn’t have when he was trying to quip back and forth with Dennis Rodman in DOUBLE TEAM. In the last less-than-a-decade, Van Damme has given some genuinely impressive performances. Often they are sad, this is the funniest one. I’m so glad he may have a chance to utilize these skills in the Amazon series Jean-Claude Van Johnson.

In a way this is a family affair. Van Damme’s son Kristopher Van Varenberg plays a small role, as is often the case these days. And Hyams’ son John (who of course directed Van Damme in UNIVERSAL SOLDIER: REGENERATION, UNIVERSAL SOLDIER: DAY OF RECKONING and DRAGON EYES, and who later directed Scott in Z-Nation) is the editor for this one. Maybe that’s to repay his father for the cinematography on REGENERATION. I don’t know if it was his idea or not, but the opening is a particularly elegant piece of editing. Silent credits over black cut to a beautiful static shot of water under an overcast sky. A small plane swoops down over the water, arcs up, shooting vertically. We hear the engine puttering out until it dies, and then we watch it plummet and crash into the water. Still no music. Cut to title over black.

Beautiful. Little touches like that can make a b-movie sing.

After Dark Action JCVD John Hyams Linzey Cocker Orlando Jones Peter Hyams Tom Everett Scott
This entry was posted on Wednesday, August 24th, 2016 at 10:21 am and is filed under Action, Reviews. You can follow any responses to this entry through the RSS 2.0 feed. You can skip to the end and leave a response. Pinging is currently not allowed.