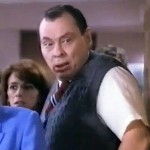 THE RETURN OF DURANT is a pioneering DTV sequel, one of the earliest examples of the artform, and also the beginning of Sam Raimi expanding his Renaissance Pictures empire by executive producing a bunch of other people’s shit instead of just making EVIL DEAD movies. If nothing else this movie was a training ground for sidekicks in future Raimi productions – Vosloo would be Lance Henriksen’s in HARD TARGET and female lead Renee O’Connor would be Xena’s. 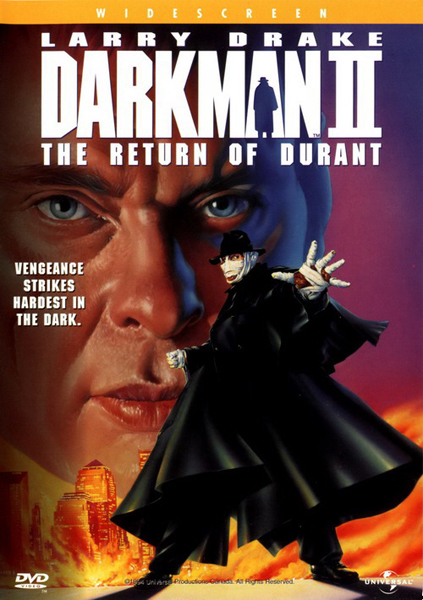 Darkman #2 continues his shadowy outcast existence, now operating from an underground lab. He enters through manholes and can move around beneath the city with a high-speed vehicle that drives on the subway tracks. He uses his strength to beat up criminals, steals their cash and uses it to buy lab equipment. Then one day while perusing the medical journals he reads about a guy working on a liquid skin very similar to his. The headline even mentions that it’s light resistant, so I guess the 99 minute problem is well known in the medical research community. Well, lucky coincidence, this other skin doctor lives and works in the neighborhood. Unlucky coincidence: his lab is in a big power plant that the recently-revived-from-his-coma Durant needs in order to build some laser weapons. So Westlake and the other guy form a partnership and improve their skin formula, but since this doctor doesn’t give in to the muscling by Durant’s men they end up killing him.

I don’t think they realize just how lucky they are. If this guy got burnt up but survived this wouldn’t be called DARKMAN II, it would be called DARKMEN. You think one burnt up liquid skin expert bent on revenge is a pain in the ass, just imagine if you were dealing with two! Well, they lucked out on that one but now Darkman is even more pissed than before because this is the second time they’ve ruined his life. And they’re interfering with an important scientific breakthrough. That’s just not cool.

By the way, Durant has a big scar on his forehead, which is also important to consider. That helicopter explosion was pretty fiery, and he could’ve easily turned into a Darkman himself. I wonder if Darkman would’ve shared the liquid skin with him? Or would he just tell him to fuck off? Oh well, no sense in hypotheticals.

Bringing back Durant was kind of a cheat, and kind of an obvious ploy, but also impressive because when does a DTV sequel ever have returning cast members? Only ART OF WAR II did that and that was more than a decade after this one. Seeing this character again reminds you what a good villain he was, and his plan of breaking out a mad scientist and creating more powerful weapons to put on the streets in competition with cheap weapons is a pretty good one. He also is in cahoots with some dude in a suit and tie with two skinhead bodyguards – I’m not sure if that guy’s supposed to be a senator, but that’s how I choose to read it. What a scumbag.

Darkman has some real shitty luck, he’s like Paul Kersey in the DEATH WISH movies, you would not want to be in his life. He makes more than one friend in this one who gets killed. One second it seems like the plot is going one way, next second there’s a car bomb and that’s the end of that.

Although DARKMAN was itself pretty low budget for a Hollywood summer action movie, the DTV sequels obviously have to have a lowering of production value and filmatic skill. The director, Bradford May, was a TV guy who did some episodes of Friday the 13th and some HUNTER tv movies. This kind of seems made-for-tv the way it opens with narration explaining his origin, recycling footage from the movie but occasionally substituting shots of Vosloo for Neeson. It also recycles Danny Elfman’s themes, but I’d say that adds production value, because it sounds way bigger and better than most DTV scores.

But Vosloo, let’s be honest, is no Liam Neeson. I always like seeing the guy in movies for some reason, and he would make a fantastic stunt double for Billy Zane. Out of the makeup he works as kind of a stoic if bland problem-solver guy. But when we see his burnt up face and he’s supposed to be crazy he’s so much less convincing than Neeson that you just gotta laugh at his dubbed in lines. So all the gimmicks of the character are still in place, but I feel like you sort of lose the tragic monster side of it because it just doesn’t come through as well that he’s a nut. I guess he must be since he spends his time in a sewer playing with a cat and a remote control rat, but when he’s walking around he seems pretty well-adjusted, like any TV hero who goes around using his unique skills to help people.

While this is definitely more enjoyable than most DTV sequels, it’s still not particularly memorable. Its biggest achievement is just demonstrating what a cool concept DARKMAN is and proving that it did lend itself to further adventures. Apparently there actually was a pilot shot for a proposed Darkman TV series, this time with some other guy as Darkman but Larry Drake returning as Durant. This I’m sure is alot better than that, but it does sort of feel like the beginning of a TV series or a series of TV movies. It’s mostly sort of imitating what happened in the first one but doing it on the cheap, and stretching credibility further. In the first one he recorded a few phrases from Durant and learned how to imitate them, and this made it suspenseful to see how he was gonna pull it off. In this one he does the same thing except learning those two lines now means he can do a flawless imitation of anything the guy would say. Pretty silly. But I guess that goes with the territory.

The real fun would’ve come later on when they started to get tired of the same formula and start messing with it. He starts disguising himself as celebrities and doing PSAs for liquid skin research or something, I don’t know. (Okay, that doesn’t sound very exciting. But they would’ve come up with something I bet.)

Arnold Vosloo DTV DTV sequels
This entry was posted on Saturday, February 28th, 2009 at 12:02 pm and is filed under Action, Reviews. You can follow any responses to this entry through the RSS 2.0 feed. You can skip to the end and leave a response. Pinging is currently not allowed.

6 Responses to “Darkman II: The Return of Durant”