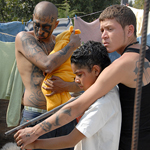 Sayra (Paulina Gaitan, WE ARE WHAT WE ARE) is a Honduran teenager who joins her uncle and her estranged father in an organized group traveling north together. Or a “caravan” you might call it if you wanted it to sound very foreign.

Meanwhile, in a town near Mexico’s border with Guatemala, a teenager named Willy who goes by the gang name El Casper (Edgar Flores) does what he needs to survive as a young member of the Mara Salvatrucha, a.k.a. MS-13. That includes helping recruit an even younger kid, Benito (Kristyan Ferrer, “Mexican Boy #1, SPECIES: THE AWAKENING), who the tattoo-faced o.g.s name “Smiley.” 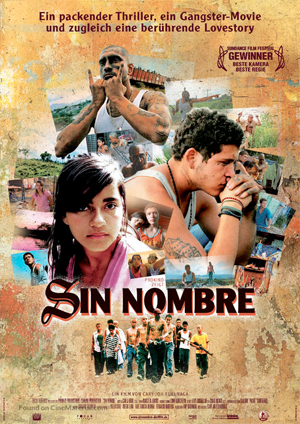 Casper clearly has reservations about the gang life. When he has to take part in brutality, like beating up Smiley for thirteen extra long seconds to initiate him, we can see on his face that he doesn’t want to do it. He hides the existence of his girlfriend (Diana Garcia) and his digital camera so they won’t be taken from him. He disobeys a command to go to a place and lies about it so that he and Smiley can avoid a situation where they might have to fight or shoot someone.

The leader of their group, Li’l Mago (Tenoch Huerta Mejia, SLEEP DEALER) is a fascinating and terrifying character. It’s very clear what makes him both appealing and intimidating to Casper and Smiley. He seems genuine in his statements of love to the young people he’s bringing into this horrible life. Smiley is so tiny and skinny, and he has these adults knock him on the ground and stomp on him. Afterwards Li’l Mago lifts his bloodied head, kissing it gently, saying “Congratulations, homie” and laughing about him being “all smiles” now. And it doesn’t play like this is his way of being scary. I think he believes he’s a loving person.

In one of his early scenes he’s carrying his baby in a yellow onesie with animal ears on the hood, bouncing and kissing him as he brings Casper and Smiley to the roof, shows them a guy from a rival territory he has locked in a cage, and instructs them to shoot him. It’s made extra disturbing by the home made quality of the gun, basically two sections of pipe that you squeeze together to launch one bullet. Li’l Mago’s actions are doubly evil – the murder and the forcing of children to murder – and he seems to have no idea. He seems to really believe he’s teaching important lessons and values to the next generation.

So even after that he can tell Casper “I love you, son. From the heart,” and sound like he means it. When Casper sits with him I think he does have some affection for him even while worrying that at any second he could get killed. I won’t give away the worst thing Li’l Mago does, the act that pushes Casper to finally try to escape, but after it turns out worse than he expected is the only time we ever see Li’l Mago looking scared or showing regret. Briefly, and not in front of anyone.

Anyway, Sayra and her group aren’t having a great time at life either. Feet hurting, tired and hungry, getting rained on, waiting days for trains to climb on top of, having to find ways to bathe or change clothes. They have to always worry about being robbed by gangs or caught by border patrol or falling off the train and getting run over. In one town people cheer them and throw them fruit. In another, kids throw rocks and yell at the “fucking immigrants.” Sorry, bad white people, you don’t have a monopoly on that shit.

Eventually they intersect with Casper, who decides to head for America with them. He has knowledge that helps the group (for example where to get off the train to avoid border patrol) but he also endangers them because the gang is pursuing him for trying to leave. When the people on the train realize Casper is a violent person – even though he’s defending them from a robbery – they don’t want him to be with them. Everyone fears and ostracizes him except Sayra, feeling that familiar “But you don’t understand him!” teenage girl instinct.

We know in our hearts that she’s right to trust Casper. He’s going to do whatever he can to escape this life. But Smiley isn’t at that place. He’s maybe 13, so it’s exciting for him to be told he’s part of this group, being walked around and introduced to all these scary looking adults who flash signs at him and call him terms of endearment and make him feel grown up and tough. He’s always holding his head up and practicing his tough guy face. And when it’s between helping his friend who’s in trouble or following the orders of the deadly murderers who are after him, he chooses the easier path.

At the beginning Casper came to meet Smiley at his grandmother’s, and Grandma called him trash and said her Benito wasn’t coming with him. Of course Grandma’s protective instincts were correct, but ironically here we are with the trash trying to leave the gang and the innocent grandson trying to murder him for it. I think one of the scariest moments is a little scene where for the first time we see Smiley hanging out with kids his own age. He’s telling them that he has to kill Casper because it’s “the rules,” and showing them the gun he’s going to do it with. When he aims it at them and pretends to shoot, most of them laugh with him. The one that doesn’t later tries to return Smiley’s gang sign.

He’s carrying himself entirely different from how he did before and these kids all want to impress him and be like him. How is this shit ever going to stop?

This is one of those movies where I know I really have no idea how authentic it is, but it feels heavily researched and convincing. And it uses the power of its medium to make us feel we are with these characters in this harrowing situation. It’s a good artistic argument for empathizing with other people’s struggles and rooting for their success instead of trying to distance yourself through dehumanizing language and heartless gotta-look-out-for-#1 platitudes.

Fukunaga’s three movies so far each take place in different cultures and parts of the world. After this he did JANE EYRE (2011) and BEASTS OF NO NATION (2015). He’s so worldly they must not have known he was American and they hired him to do a James Bond. But I was still curious what drew him to this specific topic. It turns out when he was at NYU he made a short film based on an incident in Texas where immigrants were abandoned in a trailer. When it traveled to different film festivals and won some awards people kept asking if he had a script for a feature version, so he started doing research for one and got so involved in it that it evolved into this.

Cary Fukunaga Diana Garcia Edgar Flores MS-13 Paulina Gaitan Tenoch Huerta Mejia
This entry was posted on Wednesday, April 10th, 2019 at 10:16 am and is filed under Crime, Drama, Reviews. You can follow any responses to this entry through the RSS 2.0 feed. You can skip to the end and leave a response. Pinging is currently not allowed.