Sure, you also have all the stuff about what a preposterous feat it was to figure out you can shoot some guys on a fuckin rocket, have them get out and walk around on the moon, and then come back and land on earth safely. I mean, how the fuck? The filmatism really concentrates on rockets as rickety, iffy propositions. We’re crammed in there with him in the test flights, or with the crew on the real launches. Always claustrophobic. We hear all the roaring, vibrating, clattering, rattling and mysterious straining metal groans from somewhere in the machine. The dials and buttons click and look so impossibly low-tech today. Even when they were the state of the art they couldn’t have felt all that safe.

Chazelle and director of photography Linus Sandgren (AMERICAN HUSTLE, LA LA LAND, THE NUTCRACKER AND THE FOUR REALMS) shoot mostly close in and handheld, but it’s not disorienting, it’s intimate. It really emphasizes that they’re not so much “flying a space ship” as getting shot out of a cannon. They have prepared in every way they know how in order to make it work. Still, it’s a tall order. 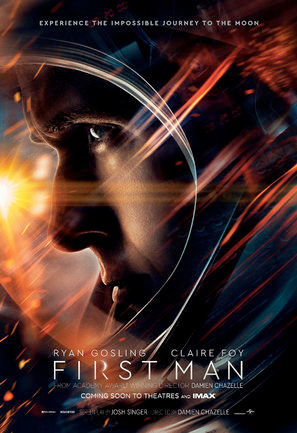 But as much, maybe more than the movie is about trying to land on the moon, it’s about Armstrong grieving the loss of a two year old daughter to cancer. In this interpretation his fearlessness and good old fashionedness mean he’s suppressing his emotions in unhealthy ways. Early in the movie we see him excuse himself from a birthday party to go into a room by himself and sob. I forget if he’s holding a photo of her or a Bible or something, but he stuffs it in a drawer, along with all his feelings, and never acknowledges his grief in front of family, colleagues or anyone.

He doesn’t have a military background, but it seems like he does. I’m not just talking about his skills and how he carries himself, but the amount of close friends who lose their lives, and the trauma of his wife Janet (Claire Foy, SEASON OF THE WITCH, playing Cindy Williams in MORE AMERICAN GRAFFITI, I decided halfway through) always worrying that some day he’s gonna die on the job. And just like the rocket, it’s not clear whether his mind is built well enough to withstand this stress. In one scene he tries to go home and play it cool after his face is scraped up from a test flight, but when Janet asks about it he doesn’t make eye contact and immediately pretends to have forgotten something at the office and leaves.

Gosling plays Armstrong as an interior weirdo, like he might as well be one of his characters who’s in love with a sex doll or an artificially intelligent hologram. He’s not at all warm to his family. He tries to get out of even saying goodbye to his kids before leaving for the moon, until Janet yells at him and forces him to, and then he’s a total fuckin weirdo about it, answering questions about whether or not he’ll come back the same way he would in a press conference. And he’s not so good in press conferences, either. There’s a scene where Buzz Aldrin (Corey Stoll, LUCKY NUMBER SLEVIN), already established as a cynical dick who annoys his colleagues, has to use his charms to smooth things over after Armstrong creeps everybody the fuck out.

He can very occasionally make a joke with one of his space buddies. In one scene he shocks the hell out of his friend by being interested in having a beer with him. But whenever he gets too upset to keep it inside he gets into his car and drives off really fast. When his closest friend Ed (Jason Clarke, DEATH RACE) comes to find him and try to be there for him he angrily refuses to talk about it.

For real, this movie argues that Neil Armstrong went to the moon because he wanted to be alone.

Then when he gets home they want to make sure he didn’t bring home any moon infections from touching the mold on that green cheese or whatever, so to be safe he has to go into quarantine for three weeks. For a second I thought “Oh that’s good, he’s gonna love this,” but then I saw that oh shit, he has to be in there with fuckin Buzz Aldrin. Torture.

Like many astronaut movies, this is a total characteractorpalooza. Of course Kyle Chandler (SUPER 8, ARGO, ZERO DARK THIRTY, THE WOLF OF WALL STREET, CAROL) is in there. You can’t make a period movie like this without Kyle Chandler in the cast. I bet there was a point where he wasn’t gonna be able to do it and they were gonna cancel the whole movie. I was happy to also see the aforementioned Clarke (WHITE HOUSE DOWN) and the always great Shea Whigham (COP CAR), plus Ciaran Hinds (LARA CROFT: TOMB RAIDER: THE CRADLE OF LIFE). I did not recognize them but also Patrick Fugit (ALMOST FAMOUS) and Ethan Embry (DEVIL’S CANDY) and Lukas Haas (INCEPTION) and Pablo Schreiber (DEN OF THIEVES) all play astronauts.

Actually the strangest appearance is the R&B singer Leon Bridges, not because he’s in it but because he’s playing Gil Scott-Heron. I mean he doesn’t have dialogue or anything, but Bridges plays the great soul-jazz-protest-poet-singer performing (of course) “Whitey On the Moon”:

I can’t pay no doctor bill.
(but Whitey’s on the moon)
Ten years from now I’ll be payin’ still.
(while Whitey’s on the moon)
In the same scene we see clips of the real Kurt Vonnegut expressing similar sentiments, that the money should be spent for our needs on earth. And I wondered – is Gil Scott-Heron supposed to be a bad guy here? I don’t know. Not necessarily. Anyway, here’s a song I love by him that John Legend could’ve played to Ryan Gosling in LA LA LAND.
https://youtu.be/RWRgZPnmYgo

Speaking of jazz fans, this is a story that Clint Eastwood got the rights to and was gonna direct for a while. Just like A STAR IS BORN. Chazelle (THE LAST EXORCISM PART II, GRAND PIANO, 10 CLOVERFIELD LANE) did not get a writing credit this time. Josh Singer (THE POST) got sole credit for his rewrite of the previous script. I could see Clint’s version also dealing with Armstrong’s pent up emotions, but he never would’ve let Gosling play him as such a weirdo.

I do wish I was able to see it in Imax, but it had left by the time I got to it. I believe some or all of it was shot for the format. My viewing experience was a stark illustration of one of the weaknesses of modern theatrical presentation. If you’re a grump like me you may have noticed that there’s one way in which modern theater chains never build their auditoriums up to what used to be a minimum expectation: they don’t think screens need to conform to the size of the movie being shown. Most movies are projected in one of two formats: scope (the wider rectangle) or flat (the not as wide rectangle), so the screen is going to be built to one of those two aspect ratios. And it used to be that they were built with masking, a wall of black material that raises from the bottom or comes in from the sides to cover part of the screen if the movie is not going to be projected onto it.

I started to notice several years ago that the local multiplexes weren’t bothering to use masking anymore, then I suspected that they don’t even have it anymore. So in this case the scope FIRST MAN was being projected onto a flat-shaped screen, with empty space above and below the picture, like you’re at home watching a TV instead of in a real movie theater that you paid out the ass to see a real movie in.

So anyway, this movie is mostly shot close in and the music by Justin Hurwitz (GUY AND MADELINE ON A PARK BENCH, WHIPLASH, LA LA LAND) stays subtle most of the time but then they get to the fuckin moon and the music builds and then finally he opens that hatch and he steps out and there is A WIDE CINEMASCOPE SHOT OF THE MOON, THE WHITE POWDER SET STARKLY AGAINST A BLANKET OF BLACKNESS, AND IT GOES ALL THE WAY ALONG THE LOWER EDGE OF THE SCREEN LIKE SOME LAWRENCE OF ARABIA TYPE SHIT!

That all caps is how I imagine I would’ve felt in Imax, but in this theater I was distracted by it being a strip of white floating a few feet above the edge of the screen.

Kinda dampens it for me.

Still pretty good though. I would rank this low in Chazelle’s filmography, but it’s an interesting take on the ol’ astronaut movie. And I look forward to FIRST MAN HOLIDAY.

astronauts Buzz Aldrin Ciaran Hinds Claire Foy Corey Stoll Damien Chazelle Ethan Embry Gil Scott-Heron Jason Clarke Kyle Chandler Leon Bridges Lucas Haas moon landing Neil Armstrong Patrick Fugit Ryan Gosling Shea Whigham
This entry was posted on Monday, November 19th, 2018 at 8:01 am and is filed under Drama, Reviews. You can follow any responses to this entry through the RSS 2.0 feed. You can skip to the end and leave a response. Pinging is currently not allowed.