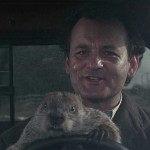 I’m sure you’ve seen this one before but if not here’s the deal. Bill Murray is a bitter, cynical weather man who has to go to Punxatawney to cover the Groundhog Day ceremony where they pull the groundhog out of a tree stump and pretend to ask him if he saw his shadow or not. Bill clearly hates this shit so he gets it over with and tries to get the hell out, but a blizzard (which he had predicted would not happen) strands him at a bed and breakfast. 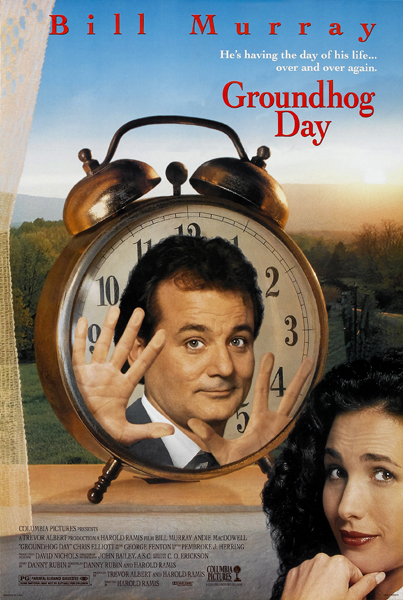 The next morning he wakes up at 6 am hearing the same broadcast he heard the morning before, and thinks the radio station fucked up and played the wrong tape. But he looks out the window and there’s no snow, and people on the streets are headed for the Groundhog Day ceremony again. And he goes downstairs and starts to have the same encounters with various locals that he already had the day before.

And the rest of the movie is about the increasing frustration, mischief and eventual enlightenment caused by his having to live the same Punxatawney Groundhog Day over and over again (we don’t know how long it lasts but it’s definitely a long time – according to the DVD extras the writer originally envisioned it as thousands of years).

When I saw this before I liked it because it’s a good Twilight Zone type premise and it’s funny to see the way Bill Murray takes advantage of the situation, using his knowledge of events to rob banks or manipulate people, or using the lack of consequences to create mischief. He can lead the police on a chase or punch an old high school acquaintance in the face because the next day it will be undone and nobody will remember. And he can use the endless time loop to learn to speak French or play piano.

But now that I see it again as a more thoughtful, positive individual and a more astute motherfucker in the area of filmatic theory and practice, the movie takes on a much deeper meaning. The reoccuring day is not just a cool gimmick, it’s also a reflection of the way he feels about his life. He is tired of repeating variations on the same old weather shit, going to the same places, surrounding himself with the type of people he hates. So he ends up literally having to relive the same day every day, and cannot escape these small town people because of the blizzard that strands him there. And the one person he really likes, his new producer (played by Andie McDowell) he has a hard time connecting with, first because he approaches it on a superficial/manipulative level and then because he only has one day of genuine bonding before she forgets it all entirely and he has to start over from scratch.

But over time he starts to change his attitude toward life, even this horrible repeating life. It’s not just that he picks up hobbies and interests, and starts making a more sincere effort to have a relationship with Andie McDowell. That’s what I remembered from before, he learns to do things to genuinely make Andie McDowell happy instead of just things that trick her into thinking he’s cool. That’s a good moral but I think there’s more philosophy in the movie than just that. He also starts trying to help people he doesn’t even know. To me the most moving scene is when he decides to start feeding and hanging out with the old homeless guy he’s been walking past every day. The guy gets sick and dies, and you see how much this upsets Bill Murray. He won’t accept it. He tries to figure out what it is that kills the guy so he can stop it from happening the next time.

To me that’s the deepest thing about the whole movie. He lives in a world where there are literally no consequences to anything. The old man dies every day, but he’s back again the next day, so it really doesn’t matter all that much. And yet, instead of choosing to not give a shit and to continue indulging himself, Bill Murray decides he wants to spend his time by trying to make this guy live. And by catching the kid who falls out of the tree everyday and changing a flat tire that some old ladies get every day. He has no reason to do these things except to make the world a little better, to make today a happier day, to be a nice guy. And he does it. That’s Jesus right there, that’s Buddha, that’s Santa Claus and probaly Superman and Ziggy. Arguably Popeye. Maybe Zorro, I don’t know too much about Zorro. Anyway, it’s deep.

So I will follow Bill Murray’s lead. There’s no reason to take back what I said about Harold Ramis, since he never heard it in the first place, but I take it back. This guy, at least in 1993, was striving for excellence. It’s nice to see a mainstream studio comedy with such an unusual gimmick (before Charlie Kaufman), but especially with one that has deeper meaning than just a clever hook for a movie. And I also gotta credit Ramis and co-writer Danny Rubin for not ruining it by trying to explain what caused the loop (a curse? some radiation?) or specifically explaining exactly what causes it to end. If he was a mediocre director he probaly woulda worried that the audience would be confused and come up with some phoney explanation.

By the way, did you know there’s an Italian remake of Groundhog Day called It’s Already Yesterday or Stork Day? I wonder if that’s any good.

Anyway, good job boys, a couple more movies like this and you won’t have to keep coasting on your records of public service as Ghostbusters.

Bill Murray
This entry was posted on Saturday, April 15th, 2006 at 2:53 pm and is filed under Comedy/Laffs, Reviews, Romance. You can follow any responses to this entry through the RSS 2.0 feed. You can skip to the end and leave a response. Pinging is currently not allowed.