I can’t really think of a compelling reason why anybody should see SEASON OF THE WITCH, but it’s way more watchable than I expected. The trailers were dreary and cheap looking, it didn’t look like there was anything very original or exciting about it, it’s from the director of GONE IN 60 SECONDS (remake), and then I think it got delayed but I can’t really prove it because nobody was waiting for it to come out so who would remember? 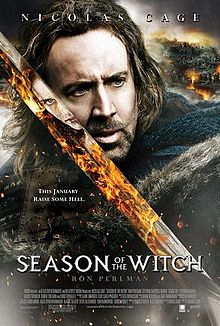 But you know the reason I saw it: Nicolas Cage. He does only about one line of vaguely mega-acting. He pretty much just plays plain old Nicolas Cage, and they didn’t try very hard to make his lines sound like something a knight would say. The characters pretty much talk like normal modern individuals. “We’re gonna need more holy water!”

Cage and Ron Perlman play the two most badass mass-murdererers of non-Christians in the Crusades. Through a montage we see them having a good time through several different battles, saying things like “you get the 300 on the left, I’ll get the 300 on the right.” Just going around chopping up people and joking about how whoever ends the lowest amount of human lives will have to buy the other one a beer, ha ha ha. I guess I gotta give the filmatists credit for just having them say “you owe me a drink” and not specifying Bud Light or something like that. So at least we know they did their research on that one, Bud Light did not exist yet during the Crusades. Good catch.

Also it’s nice to see Ron Perlman in a movie where he gets a few things to do. He deserves better than this, but alot of times he gets worse.

Anyway they decide they don’t want to fight anymore so they get locked up, just like Muhammad Ali. But while they’re in the joint the Bubonic plague is fucking shit up, including Christopher Lee, who has an Elephant Man type bubble on his head and fucked up teeth (props to the makeup department on that one, it’s really disgusting to look at). The Church decides that the cure for the plague is to send the witch that caused it to some place where some priest guys will do a magic book thing that you do to a plague-causing witch. I don’t know the exact terminology, but I don’t feel bad about it because I think I do understand how viruses work better than these fucking guys. Give me credit for that at least. Forget about the magic book, just wash your hands.

Anyway, Nic and Ron are let out to deliver the witch to the other place, which Nic agrees to on the condition that she gets a fair trial when she gets there. This sets up  some dramatic possibilities because what the fuck chance is there to give her a fair trial, especially when the crime she’s being accused of is some magical bullshit that doesn’t really exist? We’ve already seen in the opening how alleged witches get lynched, and the girl tells Nic about the drowning test. One of the guys in the entourage also points out a conflict of interest: if the church says bringing the witch to this place is gonna cure the plague, are they really gonna turn around and tell the people “oh, we gave her a trial and it turns out she’s not really a witch so we can’t help you on this one”? No, they’re gonna do whatever they can to prevent a panic.

So I’m thinking they’ll say she’s a witch, but Nic’ll know they’re full of it, he’ll have to bust her out to protect her from getting burned at the stake. This man is a soldier, a warrior. He solves problems by killing whoever the church points him at. So when he’s faced with an ethical dilemma that pits him against the church and some of his own men it’ll be interesting to see how–

–oh, never mind. Then she starts acting evil and causing wolves to attack them and shit. So (SPOILER) she just turns into a CGI flying monster at the end and they gotta stab her. Well, I guess they lucked out, that made it an easier problem to solve.

I mentioned in my review of that movie SOLOMON KANE that I have kind of a weird issue with these movies that deal with witch hunts and then have it that there really are evil magic bitches that do wicked spells on people. Because this is a real life shameful thing that the human race is responsible for, they really did execute innocent human beings on the mistaken belief that they had magical super powers. I don’t know how fair it is for me to have a problem with this, I know it’s just fantasy, but to me it’s in poor taste to have a fantasy world where the shitheads who did that were actually correct and doing the right thing.

I mean, you can depict historical atrocities without pointing out that they’re bad. I recently watched the first season of that HBO show ‘Rome,’ because so many people tell me to watch it every time I write or talk about Ray Stevenson. I thought it was excellent, and especially the way they handle the fucked up aspects of the Roman culture. You get to like this guy Verenus and his family and he quits the army because he doesn’t believe in fighting for Caesar. He wants to be home and mend his relationship with his wife and become a legitimate business man. No problem, he invested in some slaves a while back, he pays a guy to keep them in a pen and feed them, he can go pick ’em up and sell ’em.

It’s the most horrible thing but the show is smart enough to pretend not to see it with modern eyes, it just shows it as if you’re not gonna be offended by it. And when he brings a little boy slave to the house his daughters treat the kid like he’s a puppy and they want to keep him.

It’s the same way with the religious beliefs and medical practices. These otherwise reasonable people will explain real world events as the result of something the god Jupiter did, or a doctor will very knowledgeably explain what animal you might try sacrificing to which god to help your ailment. The show doesn’t wink at you about it, it just acts like they’re right, and it comes across as almost kinda deep to me, as a parallel with us. We talk a big game like we know what the fuck we’re doing, but years from now probly a few of those things will seem as ridiculous as killing a bird to heal your head injury.

SEASON OF THE WITCH is different because although they do show the Crusades and witch hunts pretty matter-of-factly instead of saying “hey guys, this is bad,” they complicate things by bringing the supernatural into it. The practice of slavery in Rome would be more iffy if they showed that the gods were real and thought it was okay. So that kind of bothered me throughout SEASON OF THE WITCH.

But there’s a twist! In the (SPOILER) end, if I understood correctly, it turns out that lady is not a witch. She’s a demon. And demons want to make crusaders believe in witches so they’ll start killing ladies willie nillie. Stupid crusaders. You fell for the ol’ season of the fake witch trick.

You see, witchfinders? You shouldn’t be doing that shit, you’re just falling into their scaly, clawed hands. You should’ve listened to me.

In conclusion, watch Rome if you have time. SEASON OF THE WITCH not necessary. Not good enough to be good, not bad enough to be funny.

Christopher Lee Dominic Sena Nic Cage Ron Perlman
This entry was posted on Monday, August 15th, 2011 at 11:52 am and is filed under Fantasy/Swords, Reviews. You can follow any responses to this entry through the RSS 2.0 feed. You can skip to the end and leave a response. Pinging is currently not allowed.