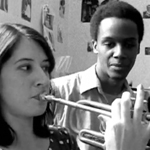 Like LA LA LAND this is a tribute to old fashioned musicals and jazz and blossoming romance, but stylistically it’s completely different. Shot in 16mm black and white, it has a nice, timeless look (I would’ve guessed it was earlier than 2009). The cast is all non-actors, the style is cinema verite, none of the dialogue, or even the story, seems at all scripted. It’s just kind of a series of unfolding events and encounters. It’s a while before any of those are actual musical numbers, but we often see Guy playing gigs, and giving Madeline what seems to be a real first trumpet lesson. Later she gets a drum lesson from Chazelle himself. (Don’t worry, he doesn’t go J.K. Simmons on her.)

There’s a scene with a juggler performing on the street for a real crowd, and afterwards Elena asks him out for coffee. They both seem absolutely authentic, very convincingly bashful. The DVD extras confirm that the actress really wanted the juggler’s number and they filmed her asking him without warning. (We never see the juggler again.)

(Also, take note, young men. Juggling has always been and will always be the #1 way to attract women.)

The scene where Elena forgets all about jugglers and gets into trumpeters is a uniquely sexually charged scene. She and Guy are on a crowded subway and end up standing near each other. Closeups really capture the intimacy and awkwardness of wanting to stand closer while pretending not to look. They brush against each other, stand face to face without talking. It seems like they’re not going to acknowledge each other until she suddenly puts her fingers in his pocket. (In a non-pickpocket way.) Chazelle squeezes so much hotness out of absolutely nothing that he doesn’t need to show them hooking up. He just cuts to them later on in the same bedroom and you get the idea.

But wait, wasn’t this supposed to be a musical? The big scene comes almost 20 minutes in. At a cramped house party with a live jazz band, this fuckin guy 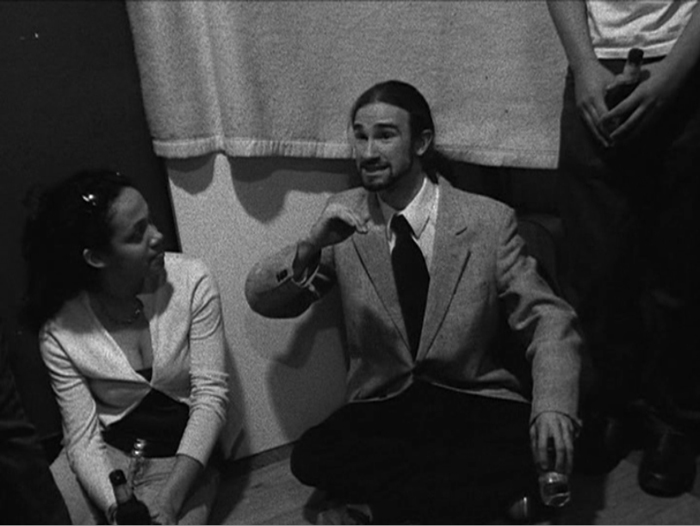 who might as well be a juggler in my opinion is sitting on the floor talking to the young woman there when all the sudden he starts to do some corny rhyming talk, and making Hulk Hogan style facial expressions (exaggerated for the cheap seats) 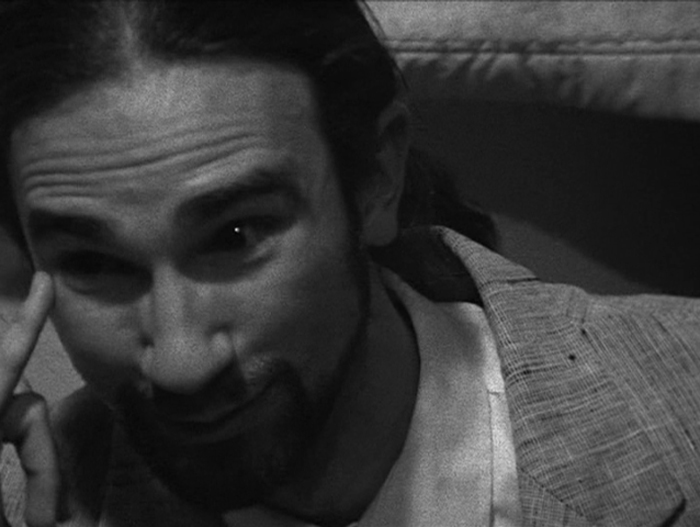 and it turns into a song and he stands up and the band plays along and pretty soon he and a couple other partygoers are tap dancing. The cool thing is it’s recorded continuously with the band playing live, and it’s just a handheld camera in this small apartment (I guess it’s actually a recording studio) crowded with what must be friends of the filmmakers standing around holding beers, nodding their heads and applauding. It all feels so natural that it took me a minute to realize it was supposed to be a musical number, and not just this dude trying to be cute at the party.

In another scene, Madeline sings to herself while in the park, but this one seems mostly pre-recorded, so it’s more traditional. And moreso the one where she’s working at a restaurant and there’s a song and dance number with the whole staff.

The acting is very natural and the scenes feel true to life. There’s one where Guy gets up early and starts playing trumpet. He seems angry. Elena seems confused and annoyed, asks why he’s up, goes back to bed. He comes in and frightens her with a loud trumpet bleat. “What the fuck!?” she says and he goes into the other room and doesn’t explain himself and plays some more. Some very authentic childish behavior between a couple who are getting sick of each other.

Another scene: They take a shower together. She looks sad. She doesn’t say why.

And another one: An old guy on the street harasses Elena until she agrees to come have lunch with him, supposedly innocent. They come inside and he’s surprised that his young daughter is home. Elena seems very embarrassed – all the sudden it seems like she was gonna turn a trick or something. I don’t get it. But she talks to the kid about report cards and they play 20 questions. These are well done scenes on their own, but to me it seems like that’s what this movie is, just a bunch of little bits and pieces dumped onto the table and then lined up in random order. 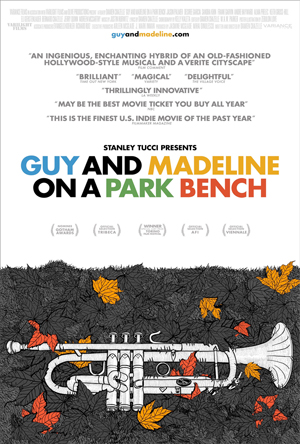 I like the feel of it. The problem for me is it’s so raw, improvisatory and non-explanatory that honestly I had a hard time following it. I wish I had read the Wikipedia plot summary beforehand. It makes it sound very straightforward, but while watching it I wasn’t sure what Guy’s relationships were with these two different white girls or what anybody was trying to do. And I still don’t know the significance of the park bench. They are sitting next to each other at the beginning, not talking, doesn’t seem like they know each other – I guess they just broke up though? But later she sings a song called “When I Kissed the Boy in the Park” – did they just kiss before that scene? Sure didn’t act like it.

Characters show up, are never explained, events seem pretty much random. Madeline is talking to a guy who wants to go on a date with her, she goes to get her hair done, he says he’ll wait for her even though it will take an hour, he does, there is a shampooing montage, then she tells him she forgot she had an appointment and can’t go out with him, sorry you waited, ha ha that’s okay and he leaves. I don’t know what any of this is about, doesn’t seem planned or arranged with any sort of method or intent that I can discern.

The ending is cool though. Guy comes to Madeline’s apartment – she is mostly packed up to move out, and about to leave for New York. He wants to play her a song he’s working on real quick. She tries to get out of it, but then agrees. And he just plays a sad trumpet solo (again, recorded live). And they don’t say anything, look down at the ground, sort of shyly smile. INCONCLUSIVE CUT TO BLACK!

Though this has alot of art to it, I don’t think it works. But I’m glad Chazelle got to mess around here and later re-emerge as a filmmaker with much more storytelling precision.

Damien Chazelle jazz
This entry was posted on Thursday, February 23rd, 2017 at 10:44 am and is filed under Musical, Reviews. You can follow any responses to this entry through the RSS 2.0 feed. You can skip to the end and leave a response. Pinging is currently not allowed.

4 Responses to “Guy and Madeline On a Park Bench”