I remember Matt Singer did a piece on Screen Crush about why SPOTLIGHT was actually well directed even though it seemed “workmanlike” to many people. THE POST won’t need a piece like that.

And yes, there are many, many scenes where it’s a bunch of dudes in ties (plus 1 woman for every 5 or 6 men) around a desk or a TV or a phone listening to somebody or talking back and forth and figuring out the different ways to fold their arms or put their hands in their pockets or on their hips or stroke their chins or hold a cup or a folder. And, being that a bunch of known actors have to be convincing as old school dudes existing in the early ’70s, it’s a symphony of wigs and retro glasses. But they make that look good. 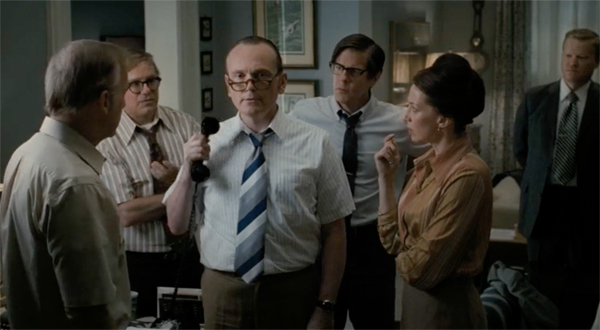 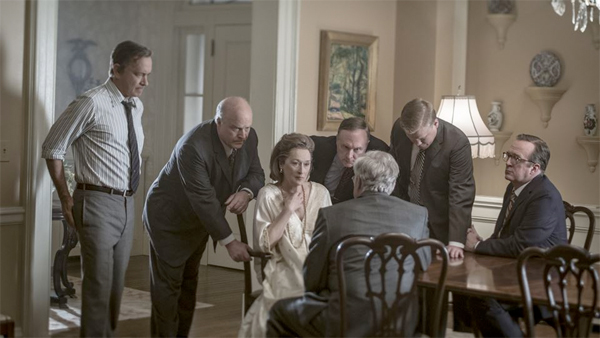 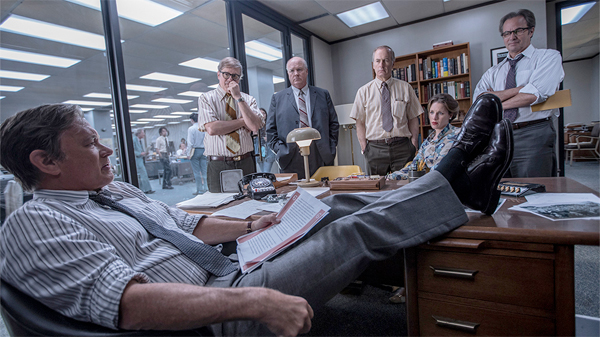 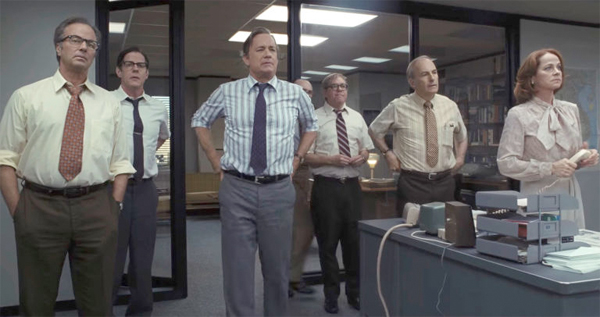 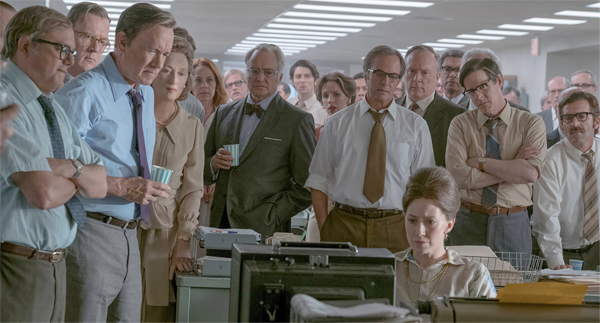 As you can see it’s a giant cast, but the most important characters are Kay Graham (Meryl Streep, A.I.), the owner who inherited the company from her late husband, who got it from her dad; Ben Bradlee (Tom Hanks, SAVING PRIVATE RYAN, CATCH ME IF YOU CAN, THE TERMINAL, BRIDGE OF SPIES), the editor who pushes back against her instincts to not rock any boats; and maybe Ben Bagdikian (Bob Odenkirk, MONKEYBONE), the reporter with a hunch that these Papers could’ve been leaked by this dude he worked with a long time ago named Dan Ellsberg (Matthew Rhys, TITUS).

We know he’s right because the movie actually opens on Ellsberg in a gun battle in ‘Nam. Creedence is playing and you think Jesus, Spielberg. Are you Robert Zemeckis? Interestingly I think Spielberg (and cinematographical life partner Janusz Kaminski [COOL AS ICE]) found a way to shoot a Vietnam war scene that doesn’t look like everybody else’s – it’s SAVING PRIVATE RYAN shaky cameras, under trees at night in the rain. It’s possible they looked at the footage and thought people wouldn’t know what war it was unless they used some Creedence or “Purple Haze” or something.

Anyway, Ellsberg goes from grunt to consultant to disgruntled when he sees firsthand that the guys at the top understand the failure of the war while they tell the public that everything’s going great. And then one day he leaves work with some, you know, office supplies.

Odenkirk, the former Saturday Night Live writer turned unlikely dramatic actor, is a great choice for this journalist who’s in a little over his head and succeeds with some skill and a bunch of dumb luck. His sketch comedy partner David Cross also plays a reporter and is on screen with him often – apparently Spielberg had no idea of their history (probly knew Cross from ALVIN AND THE CHIPMUNKS). 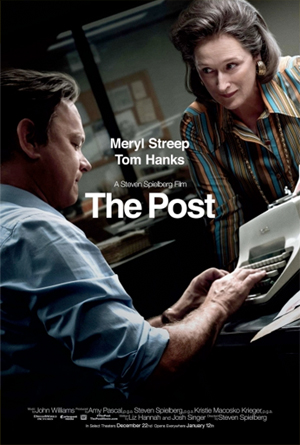 My favorite thing about the movie is that when I started watching it I definitely wasn’t thinking “You know who I bet will be the most interesting character? The lady who owns the newspaper.” And yet here we are. It’s a portrait of a changing time, when some of these people are starting to realize that the overlapping social circles of media and politicians have led to a friendliness that is dangerous to the country. And Graham has maybe the two most dramatic moments in the movie, both unexpected, so SPOILER maybe. One is when she gets up the nerve to go to her long time friend, the very nice Secretary of Defense Robert McNamara (Bruce Greenwood, Guardsman #5, FIRST BLOOD) at his house and confront him about extending the war that her son fought in. But the even more memorable one is the climax of a long, heavily orchestrated and supremely Spielbergy sequence of Bradlee calling her for permission to publish and her team of lawyers give her all the arguments of why it would be crazy and after fumbling and hedging and hesitating she meekly tells Bradlee yeah, go ahead and do it.

She has every reason to play it safe. She comes from a world where the women literally say “Well, that’s our cue,” when the men start talking politics, leave the room and go talk about wife stuff. Nobody knew that this had been boiling up inside of her. And yet it doesn’t burst out. It’s almost casual. It’s so not what they saw coming that I think some of them don’t even register that she actually said it.

(And by the way we get a cool shot of the finger pressing the button to actually turn on the presses. If you were wondering.)

At the end of the movie, after the Supreme Court win, Graham doesn’t take the credit, but then she leaves the courthouse through a crowd, and Spielberg stages it so that everyone she passes is a young woman looking at her admiringly. A gauntlet of the inspired.

I don’t want to underplay how interesting Bradlee is, though. When he finds out about the Papers, and he’s listing all the presidents who he now knows have lied about Vietnam, he hesitates before Kennedy. And he calls him “Jack.” We come to learn that this was a personal friend, as well as an icon, a martyred saint. And he’s finding out that he knew he should’ve ended the war. When Bradlee argued with Kay before all this it was about ideals and principles. It was sort of hypothetical. But this shit is devastating on a very personal level. This is a serious betrayal by his government, by his actual friends, and he will use all the powers afforded him by his profession and the Constitution to shine light on it.

This is a historical drama and it’s about Important Shit including but not limited to war, government cover-ups, freedom of the press, the importance of an independent media (and the risk of pressure from owners or shareholders), and sexism. But Spielberg doesn’t know how to do that without putting a bunch of fun scenes in there. Like the one where a random hippie dumps a giant stack of the Papers on a random reporter’s desk and he brings it in to the boss and he has trouble getting anybody to pay attention to him. Or the one where they send a kid to snoop around the New York Times to try to figure out what big story they seem to be onto. Or Bradlee’s daughter making a stack of bills selling lemonade while all the top reporters are staying at the house trying to crack the story overnight. And I guess just the story itself lends itself to great cinematic moments like Bagdikian finally connecting with Ellsberg in a motel and holy shit, there it is, dozens of stacks of paper piled all over the bed. The stolen secrets that could stop the war and/or cause both of these old work acquaintances to be crushed under the boot of the corrupt as fuck Nixon administration. Gulp.

The somewhat Sorkin-like screenplay is by newcomer Liz Hannah, rewritten for Spielberg by Josh Singer, who’s actually the guy that wrote SPOTLIGHT. I hope he writes one for each of the major publications.