So why not dip his toe in again with an action-comedy star vehicle interracial buddy movie type thing? One that would team him with producer Jerry Bruckheimer, who has also made some shameful movies, but seemed to always get away with it?

Well, BAD COMPANY isn’t as “bad” as BATMAN & ROBIN. It’s more within the accepted confines of normal people movies, with a general air of adequacy and professional competence in most areas. Of course, it’s way less memorable or worth your time – or Schumacher’s, for that matter – a movie pretty much any director could’ve made exactly the same or better.

Chris Rock plays CIA agent Kevin Pope, who is killed while undercover setting up a deal to buy a stolen suitcase nuke. But the agency knows about Jake Hayes, Pope’s identical twin brother in Jersey City, long lost due to adoption. They find him and make a deal to train him to pretend to be his brother’s persona, Michael Turner, and go through with the buy.

Obviously this script should’ve gone to Jean-Claude Van Damme. Rock replaces the splits and flying kicks mostly with running away and being terrified. He does sometimes get involved in activities such as high speed car chases and shootouts, but is often screaming while doing it.

Jake is of a completely different class and temperament than his brother. Like Chris Tucker in MONEY TALKS, he’s a fast-talking ticket scalper with a nice, fed up girlfriend (Kerry Washington, DJANGO UNCHAINED) who wants him to grow up. He also plays chess in the park, which equates to a genius mind when he has to defuse a bomb at the end – the only other time it comes up. 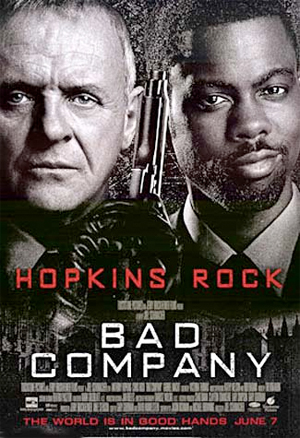 His CIA partner is Agent Gaylord Oakes (Anthony Hopkins, TITUS), who luckily gets to be the straight man and doesn’t try to mug or anything. He’s extremely skeptical that this idiot can be trained in time, but also is more sympathetic to him as a human than their boss (John Slattery, ERASER), arguing unsuccessfully for telling him the full truth, not unnecessarily endangering his life, etc.

They make him live in a shitty little dorm room where the bed, lamp, door, etc. are labeled in Czech to help him learn the language. I thought that was kind of a cool idea. Every morning Oakes comes in ridiculously early to start the training, and if Jake’s not awake he picks up the pitcher of water next to his bed and dumps it on him. After a few days of that Jake learns to get up on time and dump the water on Oakes if he’s a minute late. Another thing he could’ve tried is not filling up a pitcher of water and leaving it next to his bed every night.

Then he goes to live in his brother’s lavish Manhattan apartment, where there is comical business of having to pretend to care about the neighbor’s dog and coming home to find his brother’s hot ex (Garcelle Beauvais, hot tub scene, WILD WILD WEST) in his shower. She keeps trying to make moves on him and there is practically a sprooooiiing sound effect coming from his pants, but he has to stay true to his lady back home without blowing his cover.

I have a hard time buying all the shit this guy memorized in a couple days, but we keep seeing him able to call neighbors, doormen, etc. by their names. The idea is “oh no, how is he going to fake his way out of– oh wow, they foresaw that and trained him for it! Bravo!”

But sometimes they didn’t train him for it, and he has to make up some shit. While having to feign knowledge of nuclear bombs he makes references to Dr. Dre and Wu-Tang Clan. Ha ha, this Russian army guy (Peter Stormare, THE LOST WORLD: JURASSIC PARK) doesn’t know what that is. I mean, I do respect that this is probly the only major movie with a reference to Professor Griff.

I know Rock is the more brilliant standup, but Chris Tucker is way funnier doing this kind of bullshitting in movies. He sells the lie way harder so you can see why people would be afraid to call him on it. Yes, I’m gonna bring it up again – MONEY TALKS is a better formula interracial buddy movie from a widely hated director.

There are a few laughs though. I like when he goes to the club to DJ after having his heart broken and evacuates the club by playing Air Supply’s “I’m All Out of Love.”

Eventually there are betrayals, shootings, a car chase through a field. They have to keep hitting a guy who breaks through the sun roof, and the guy hangs Oakes’s head out of the door. Kind of small scale as far as big budget action goes, but there are a few good car stunts. Stunt coordinator/second unit director is Ken Bates, who also did a bunch of Michael Bay movies.

This is another one with yellow tinting, but for Prague, not L.A. When it’s in the U.S. it’s more grey looking. When I think “Jerry Bruckheimer action movie” I think of Tony Scott and Michael Bay’s heat trails and sunrises and shit. This does not have that look. The skies are overcast and non-idealized and on second look I kind of like the subtle colors, but it’s kind of bland compared to cinematographer Dariusz Wolski’s other movies like THE CROW, CRIMSON TIDE, DARK CITY, the PIRATES OF THE CARIBBEAN trilogy, PROMETHEUS and ALIEN: COVENANT. I don’t know what happened.

Also, like all movies like this, Jake proves he’s a man by shooting a guy at the very end. And he not only gets paid $90 million, but saves millions of lives in front of his girlfriend, so she’ll have to lay off him about his lack of ambition for a while.

It’s kind of novel to see Hopkins in this, but it’s not his first time in a fluffy summer fun times movie. Remember, he’d been the original Zorro in THE MASK OF ZORRO (1998). I should rewatch that. And he was really starting to cash in on the Lecter Circuit, having done HANNIBAL the year before and RED DRAGON right after this. This wouldn’t be his last attempted blockbuster, either – he’d do THE WOLFMAN and the THOR movies and TRANSFORMERS: THE LAST KNIGHT.

This is more dignified than THE LAST KNIGHT, though. It uses him for his acting style rather than just his Respectable Britishness. I wouldn’t say he has a great chemistry with Rock, or that Rock is at his funniest, but the humor is enhanced by Hopkins’ impossibly dry, dead-eyed, mouth open casualness in the face of danger. For example, when he says “Very interesting, he’s being double-crossed by his own men,” and then has this expression while watching a man suddenly get shot in the head right in front of him:

And at the end he lets his hair down by messing with Jake at his wedding, and then does this cute thing where he touches his nose while he laughs.

You could’ve put any big name actor in this role, but none would’ve done it quite the same as Hopkins. So that’s something. Also he wears a baseball cap alot. He doesn’t do that in all his movies.

Rock had done mostly comedies (I’M GONNA GIT YOU SUCKA, CB4, BEVERLY HILLS NINJA) but also a little bit of drama (NEW JACK CITY) and one legit action movie (LETHAL WEAPON 4), so this didn’t seem too out of character for him. There’s one part where he’s hassling the CIA about not being able to find Saddam Hussein, and it seems like something out of his act. The movie probly could stand to use more stuff like that. Like most of his movies he’s saddled with this plot and you miss his unfiltered voice.

It may be a little unfair to imply that this was intended for summer blockbuster glory. In fact it was planned for a December, 2001 release, but delayed until the next summer because nobody was gonna want to see a movie about terrorists trying to get a nuclear bomb three months after 9-11. Apparently some scenes were filmed in the World Trade Center, one of the last movies to do so.

There’s actually a song on the soundtrack called “911” by Gorillaz featuring D12, recorded when the latter group was stranded in London after flights were grounded on that day and Damon Albarn had been experimenting with sounds inspired by Middle Eastern music styles.

The release ended up badly timed in a different way. It came out the week after THE SUM OF ALL FEARS, which was also about terrorists with a nuclear bomb, and failed to knock it out of the #1 spot. Another newcomer, DIVINE SECRETS OF THE YA-YA SISTERHOOD also beat BAD COMPANY, as did ATTACK OF THE CLONES in its fourth week. (Good movie, check that one out if you haven’t.)

The reviews were no better. Maybe better than BATMAN & ROBIN.

But it was gonna be overshadowed that year no matter what. The summer was dominated by SPIDER-MAN, EPISODE II, MEN IN BLACK II, SIGNS and MINORITY REPORT. But it’s not like they could’ve waited for Thanksgiving or Christmas, because then they’d be putting it up against the part 2s of LORD OF THE RINGS and HARRY POTTER, plus DIE ANOTHER DAY. This was an “okay, let’s just get it over with” release.

After this experience, Schumacher made his next movie just take place in a phone booth.

Anthony Hopkins Chris Rock Gabriel Macht Jerry Bruckheimer Joel Schumacher Kerry Washington Peter Stormare Shea Whigham Summer Flings
This entry was posted on Thursday, August 10th, 2017 at 7:19 am and is filed under Reviews, Thriller. You can follow any responses to this entry through the RSS 2.0 feed. You can skip to the end and leave a response. Pinging is currently not allowed.