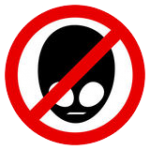 There are bigger fans of M. Night Shymalan than me. He seems a little too nice to me, trying too hard to please everybody. They call him a new Spielberg but if so he’s a new Spielberg who skipped over the young vital years of Spielberg when he made shit like DUEL and JAWS. Still, I really like this young man’s style. He seems to have a couple of trademarks already. He treats supernatural themes very seriously and in a unique style that tricks mainstream audiences into thinking they are not watching a genre picture. He populates his stories with precocious child actors and movie stars who give uncharacteristically quiet performances. His stories have themes of tragedy and loss, and they are much more about character and suspense than about actual action. SIXTH SENSE was about discovering what’s goin on with these ghosts, not running from them or fighting them. And UNBREAKABLE was a super hero movie without a single scene of somebody swingin on a rope or shooting a laser or something. 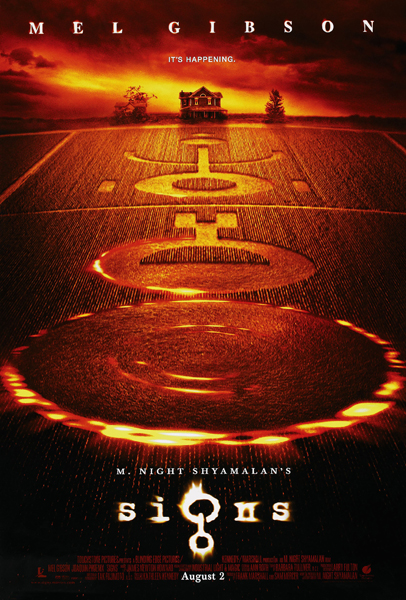 And I really like what this fella does with the ol’ camera. He knows how to communicate crap visually. None of this “people talking to each other” bullshit. I mean, that’s there too, but it’s not the only thing he knows. All three of these movies (I’m not including that Rosie O’Donnell catholicism thing because I haven’t seen it) take full advantage of the star’s faces, letting the camera linger on them to show their reactions to all this supernatural business. Especially in this movie, most of the fantastic things happen just off screen, and instead of us seeing it we see Mel Gibson and Joaquin Phoenix standing there staring at it.

In SIGNS, the new one about crop circles and trying to make the new CLOSE ENCOUNTERS OF THE THIRD TYPE, Mel Gibson plays a former reverend who lost his faith after the death of his wife. And now there is weird alien shit goin on all over the world, and his live-in brother, his two young kids, and other residents of the small town he lives in seem to want him to tell them, from a religious type perspective, that everything’s gonna be okay. Problem is though he doesn’t believe it is. On account of he lost his faith.

This picture was originally written for Badass Laureate Clint Eastwood, who wasn’t able to do it because of his schedule on BLOOD WORK. Knowing that it’s hard not to wish Clint’s wrinkly face was in there in all those closeups showing how scared it is of aliens. But Gibson, a 1999 Outlaw Award Winner and former Mad Max, does a good job. Early on there are enough Shyamalan Reaction Shots to suggest he’s gonna get the Bruce treatment – in SIXTH SENSE and UNBREAKABLE Bruce didn’t have as much dialogue as usual, and he said most of it in a near whisper. But soon enough Mel’s character starts yammering away just like most people do in movies these days. This one’s a little more talky. But I think Gibson works in the role, especially in the more emotional scenes.

By the way did you know they have another Culkin now? It seems like every year there is a new picture with a new model of Culkin doing a critically acclaimed role. There was the original one, and there was the FREAK THE MIGHTY one, and then there was the YOU CAN COUNT ON ME one and then I’m pretty sure this is a new one. And they all look and sound the same. I think we all know what’s going on here, let’s not be naive. This Culkin kid is a robot, or a clone, or a vampire, or a leprechaun or something that doesn’t age. “Macaulay Culkin” the teenage actor is actually a teenage girl in a costume hired to create this illusion that the Culkins age. But all the Culkin kids, from UNCLE BUCK to SIGNS, are the same damn vampire. He just changes his name every couple of movies to carry the illusion.

Which is kinda stupid because hasn’t he ever heard of Gary Coleman.

Anyway I like the way Shyamalan tells his stories. He doesn’t give you the whole backstory at once. It takes you a minute to figure out that Mel is a former preacher, then all the other important information is slowly given to you a piece at a time – what happened to his wife, why that made him lose his faith, etc. In most movies they’d either tell you this right from the beginning or save half of it for a surprise twist in the middle. Shyamalan gives it to you in installments, makes you piece it together your self. At times this made me confused. At one point Shyamalan does his usual cameo and the kids look at him and they say “Is that him?” and if I knew who they meant, it woulda been a very emotional scene. But I gotta be honest, I thought they were saying he was the alien.

I do think this is the weakest of the three well known Shyamalan pictures though. There is alot of humor in the movie, and it kept the audience laughing, including yours truly, but it also seemed to take away some of the tension. There is a great, contrived suspense scenario where Shyamalan in his extended cameo tells Gibson “don’t open the pantry, I trapped one in there” and then he drives away real fast. And we don’t know for sure what he means by “one of them” but we have a pretty fuckin good guess. I love this idea because you know if you were in the same situation, you SHOULDN’T go look at the pantry. But you would.

The problem is he goes and he stands on the other side of the pantry and he pretends to be a police officer, but doesn’t know how to do it so he says silly things. It’s funny but it’s not true to life enough to be a real reaction to the situation and it makes it less scary than it should be.

And not to give anything away, but let’s face it if you’re reading this already and you haven’t seen it you blew it. So I’m just gonna say it. This is Mr. Shyamalan’s first try at the creature effects and his creatures aren’t too bad but they’re not good enough to be worthy of his directational skills. He’s in a tough spot because all these ufo people always draw the pictures of the close encounters/communion types with the big eyes. The filmatists always want to stay close to the ufo literature because they think that makes it more realistic. But they’ve done it so many times that you CAN’T do those aliens anymore, because they’re a cliche.

So what does he do to make it the same but not the same? He makes it the same, but muscular. And the whole reason those fuckers used to be scary was because they were so skinny and weird. It doesn’t work to give them steroids. And it’s cgi too, so it doesn’t look like it’s really standing there in front of you. He uses some good shadows that make it creepy at times but this is not gonna be a memorable movie creature.

And let’s face it the young vital Spielberg never settled for that. Even the old Spielberg doesn’t. He gave you Jaws, he gave you E.T., he gave you Jurassic Park, he gave you the aliens in A.I. with the tv signals in their bellies. This is a dude who does not settle for the same old crap. So there’s one strike against Shyamalan the new Spielberg.

I also think the world of SIGNS is much less believable than the one from the ol’ JAWS. It doesn’t seem like Shyamalan really knows what it’s like to live in a rural town like this. “The Wolfington brothers” – jesus. Most of the other people in the town are your stock small town characters with accents. And the kids acting is so stylized. They talk like the god damn peanuts. It worked in THE SIXTH SENSE but the more he does it the more it pulls me out of the movie. I preferred what the original Spielberg did in E.T., where the kids were so realistic Drew Barrymore was allowed to say that she didn’t like E.T.’s feet. But this Culkin is a total fantasy kid, he says clever things about dogs licking their buts, he buys one book about UFOs and becomes the expert because he’s memorized it and everything in it magically applies to what’s going on across the world.

Still there are so many nice touches in SIGNS that I’d definitely say I agreed with the picture overall. Like the international approach to the invasion – not america-rules-the-world independence day crap. Most of the news reports you see are from India or Mexico, and the people who figure out how to fight back are in the middle east (although, unfortunately, their methods are referred to as “primitive”). I liked how most of what the characters know about what’s going on is through the tv, and then when the alien is actually in their living room standing in front of them we mostly just see it reflected in the tv.

But what really makes the picture is the sincere and not even all that corny theme of spirituality and, the old favorite, acceptance of tragedy. As soon as you find out that Mel has lost his faith, you fuckin know he’s gettin it back at the end of the picture. Just like you know that a Culkin with asthma is a Culkin who will soon be without his inhaler, and that when a certain character is said to have a certain object it will be used as a weapon. But the way it all fits together is very satisfying, and Shyamalan ties it all together with his trademark visual storytelling. The first shot in the movie begins on the farm and comes into the house, distorting its view through those thick old uneven windows we used to have. The last shot shows the farm clearly through the same window, now broken, with wind blowing through, the universal movie symbol for a spirit being set free. So you know, because the camera told you, what has been accomplished during this story. And it has nothing to do with aliens or crop circles.

aliens Joaquin Phoenix M. Night Shyamalan Mel Gibson
This entry was posted on Friday, August 2nd, 2002 at 6:30 am and is filed under Mystery, Reviews, Science Fiction and Space Shit, Thriller. You can follow any responses to this entry through the RSS 2.0 feed. You can skip to the end and leave a response. Pinging is currently not allowed.

One Response to “Signs”