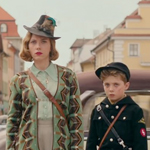 Johannes (Roman Griffin Davis, his first movie) and his friend Yorki (Archie Yates, UNTITLED HOME ALONE REBOOT) are enthusiastic participants at a sort of MOONRISE-KINGDOM-looking Hitler Youth summer camp. They’re big nerds taking great pride in learning all the normal boy scout camping shit, and they look like they could be in a live action Peanuts movie, but they’ve also been convinced it’s their patriotic duty to spout all the nonsense they’ve been taught about Nazis being the good guys and Jews being monsters. END_OF_DOCUMENT_TOKEN_TO_BE_REPLACED 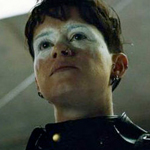 Except me! Selling point #1: director Fede Alvarez, who really impressed me with EVIL DEAD and DON’T BREATHE. Selling point #2: less grim and rapey, more fun and actiony. You still got the trademark fucked up and fetishy shit of the snow-bitten Larssonverse, but in this one our heroine is never sexually assaulted, but does have high speed chases on multiple vehicle types. Hot move: ditching police cars by jumping your motorcycle onto a frozen lake. END_OF_DOCUMENT_TOKEN_TO_BE_REPLACED

These days I lean toward the third one, and maybe the resemblance is harder to see now that Jackman is such a star in his own right and has done plenty of roles where he’s not scowling. But man, he elevated the world of that movie by squinting at it with that Clint attitude, and he was even introduced as a bare knuckle brawler like Philo Beddoe minus the orangutan. It didn’t feel like a guy self-consciously imitating a Clint-like persona, either. It was a genuine badass presence and charisma that I still believe birthed the entire modern era of comic book movie mania, for good or bad. Because without Jackman as Wolverine I don’t think X-MEN would’ve caught on and if X-MEN didn’t catch on I don’t think the Marvel movies would’ve gotten off the ground and we’d all be going to conventions dressing up as characters from serious adult dramas. (I can’t decide if I’m going as BRIDGE OF SPIES this year or one of the ACLU lawyers from LOVING.) END_OF_DOCUMENT_TOKEN_TO_BE_REPLACED