The Girl Who Kicked The Hornet’s Nest

You remember Lisbeth Salander (Noomi Rapace), the girl with the dragon tattoo, also previously the one who played with fire? Well now she is the girl who kicked the hornet’s nest. Not literally. The first title was literal only, second was both literal and figurative, this one only figurative – there are no bees or insects of any kind involved in this plot. But man, this girl really kicked the hornet’s nest, they’re coming after her.

But I feel it is only fair to point out that the title is in the past tense. She already kicked the hornet’s nest in part 2, and already got stung (SPOILER: she got shot three times, including in the head. This one opens with her being airlifted to the hospital.) Although I enjoyed seeing the girl again this is the least exciting of the three movies by far. 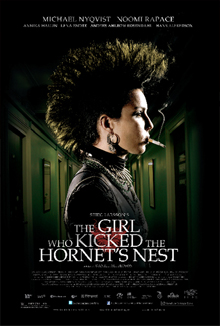 Part 1 was a decent mystery with this great character helping solve it, part 2 was better because the story was all about her. We learned more about her (including that she knows how to kickbox) and she got to do more (including kickboxing). Part 3 is all about her too, but it’s all kind of the results of the previous things that were happening, there’s not that much new for her to face. She’s dealing with the injuries from part 2, facing charges for what she did in part 2, still threatened by her dad from part 2, still stalked by her oafish, no-pain-feeling half-brother from part 2, putting to good use the hidden-camera-DVD from part 1.

For about half of the 2 1/2 hour movie she’s laid up in the hospital. Kinda reminded me of HALLOWEEN 2 – glad to see Laurie Strode back, but then she’s stuck in a bed. It’s a while before whatsisdick manages to sneak her a handheld computer device, so on the positive side there aren’t any of those computering-is-awesome montages, on the negative side it’s like she’s had her super powers taken away. When she gets it she contacts one hacker friend and then writes her memoirs. You know, alot of this stuff is not very cinematic, I bet it worked better in book form. I should learn how to read.

I did appreciate the sweet relationship she has with her doctor. She’s never been good at making friends. She doesn’t really open up to him, but he proves he’s trustworthy and cares about her, and she makes a small gesture by showing him her tattoo (but not explaining its meaning). I guess if this guy doesn’t get to know why the dragon tattoo it’s important then it’s only fair that we don’t either.

My favorite part is a silly character moment, but it’s when she finally is healed up enough to go on trial, and she shows up in court with a look more extreme than she ever had before – a huge mohawk, a dog collar with giant spikes on it, etc. I like that that’s her version of getting cleaned up. And that her lawyer is not able to stop her. She’s like yes, put me on trial, and I’ll tell you what, not only will I not try to impress you, I will intentionally try to make you hate me. That’s how innocent I am. You’re gonna have to rule in my favor anyway.

And the way she dismantles the stupid questions in her cross-examination, the way she intellectually dominates the prosecutor, is another good Lisbeth moment. You can’t deny that she’s right, even if you hate mohawks.

According to the Wikipedia the original book had a whole subplot about one of the other Millennium reporters going to work for a newspaper and uncovering a scandal involving toilets made with child labor in Vietnam. Man, I wish they coulda put that in the movie. That sounds like it would’ve just jumped off the screen, right?

I mean don’t get me wrong. There are parts where I got excited about what was about to happen. There’s a pretty tense scene with an assassination attempt in the hospital. There’s a biker gang that gets involved at the end. But most of the movie is rehabilitation in the hospital and court proceedings. It’s just not as exciting.

The director is the same as part 2, Daniel Alfredson. He does a decent job, although he let at least two awkward moments squeak by. One is when somebody says about Lisbeth, “She’s so tiny. Like a little girl.” Okay, I heard that’s how they describe her in the book, but they never made her look that way in the movies. I don’t think anybody would mistake this one for a little girl. The other awkward moment is the reactions of the jury members watching that horrible DVD of what happened to her. I don’t know man, I just didn’t buy the looks on their faces. They didn’t look horrified enough. And was one guy supposed to be kind of turned on by it? If so I say that’s a little too cynical there, Swedes. Lighten up.

They got a new Winnie the Pooh movie coming out, it should be called The Bear Who Kicked the Hornet’s Nest. I guess. Sorry, not much to say about this one. I’m getting desperate.

I was kind of thrown off by the very end (SPOILER in my opinion). It’s basically our two leads seeing each other face-to-face for one of the few times since part 1, and they basically just say “Well, see ya.” “Yeah, see ya.” The end. Part of me wanted something more dramatic, but part of me really loved it. It wouldn’t feel right if she slathered him with gratefulness for all he’s done for her, so she gives him a basic thank you as if all he did was warned her that she left her headlights on or that she had a booger on her nose or something small like that. And it’s kinda tragic because he obviously kinda wishes he could carry her away like a White Knight, but also she wouldn’t seem as fascinating to him if she would let him do that.

In a way it’s kind of about the internet right there. She knows people through computers more than through reality, it’s hard for her to connect to people. But then again I don’t think she’s friendly through computers either. I don’t see any evidence that she’s hanging out in chat rooms with fellow tattoo enthusiasts or anything like that. It’s all work no play. Or maybe not, I don’t know what she does to inspire such loyalty from guys like her hacker friend Plague.

Anyway, there it is. You pissed off your friends and loved ones by risking it all to clear Lisbeth Salander. You did it. She’s been declared legally competent. Nobody is in eminent danger anymore. Okay then, see ya.

Noomi Rapace
This entry was posted on Monday, January 31st, 2011 at 2:37 am and is filed under Reviews, Thriller. You can follow any responses to this entry through the RSS 2.0 feed. You can skip to the end and leave a response. Pinging is currently not allowed.

8 Responses to “The Girl Who Kicked The Hornet’s Nest”