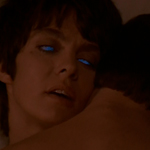 Well, what seemed like a million years later, but was actually only eleven, director John Landis did a far lesser known but confidently crafted horror-movie-that-is-funny, this time in the vampire realm. INNOCENT BLOOD tells the story of an out of control couple of nights in Pittsburgh when a well(ish)-intentioned bloodsucker named Marie (Anne Parillaud, LA FEMME NIKITA) decides to feed on the local mafia, and it turns into a big mess. END_OF_DOCUMENT_TOKEN_TO_BE_REPLACED

20 years later I’m softer on it. I still think it sucks, but it’s a funny sucks. And I’ve been able to laugh through other equally terrible (though never as societally elevated) Roland Emmerich pictures including 2012. As long as we’re talking about him as a back-up Rob Cohen, not what we have now instead of James Cameron or George Lucas, I can appreciate him. END_OF_DOCUMENT_TOKEN_TO_BE_REPLACED

Also there is arm wrestling. END_OF_DOCUMENT_TOKEN_TO_BE_REPLACED

It’s 22 years after the events of PSYCHO. Norman Bates has been in an institution, having been found not guilty by reason of insanity, but is now considered fully rehabilitated. Against the petitioning of Lila Loomis (formerly Crane, and still played by Vera Miles) Norman is released. His doctor (Robert Loggia) seems to truly care about and believe in his mental stability, but regrets that cutbacks prevent society from having more social workers to look after him. For Norman’s sake and for ours. END_OF_DOCUMENT_TOKEN_TO_BE_REPLACED

But now I’m making it sound stranger than it actually is. All I can figure to describe it is “ONE FLEW OVER THE CUCKOO’S NEST meets ROLLING THUNDER.” END_OF_DOCUMENT_TOKEN_TO_BE_REPLACED

This is the perfect exaggerated painting of the 1980s and the cocaine wars. The good old days. And it even makes you root for this psychotic egomaniac shithead, Tony Montana (Al Pacino [Scarface]). ‘Cause first you see him as an immigrant getting hassled by the man, working as a dishwasher and tough talking his way into bigger work, dropping off some money for some cocaine. His higher ups (small time hoods themselves) don’t believe in him. But when the dealers pull a cross on Tony and his friends and it turns into an insane bloodbath (literally, come to think of it, because alot of the mayhem takes place in the shower), all involved must admit that he handles it with, uh, flair. He leaves with the money and the yayo (a term now popular because of the movie), tells the middlemen to fuck off and brings it all straight to the area boss, who is very impressed. This is typical of his quick rise up the totem pole. Initiative, elbow grease, bootstraps, etc. END_OF_DOCUMENT_TOKEN_TO_BE_REPLACED